What I have learned lately on steemit by @zology69 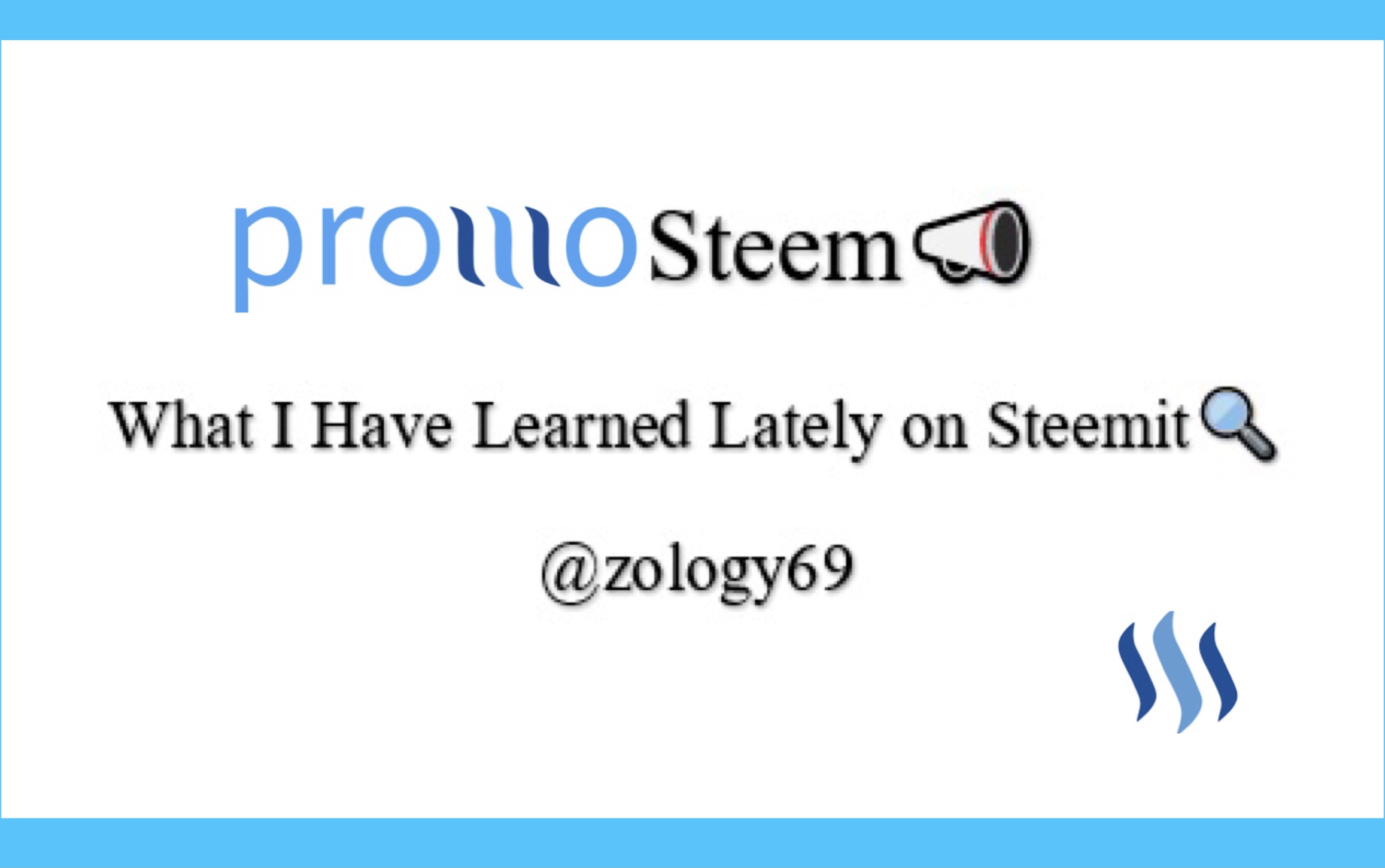 Even though I am a newbie on steemit, I am a very engaged and active one and that has led me to discover some very interesting things fast. Most of my discoveries are from my own experience and for some, I asked questions about some observations I made and was informed. I have learnt a great deal on steemit at this point and I hope to learn more. I’ll tell you about my discoveries now.

Tags are a very important component of your post. I discovered and learnt how to use the better life tags to improve your chances of voting. Unlike the diary game where we talk about our daily activities, the betterlife with steem project is about more than just your day. It gives us a chance to tell steemit some of the positive things we do in our lives that improve our health and that of our family and friends. Click here to learn more about the betterlife project.

In trading SBD for steem, Instead of selling my SBD and steem for the lowest ask, I can place my own offer or bid so that when the token reaches my bid value, it’ll automatically be sold even though that might be slower. As a newbie I always sold my SBD for the lowest ask in the market thinking that was the only way. My attention was drawn to this when @massachussets mentioned something about it sometime in a chat. Click here to check out my tutorial on how to place your own bid in SBD for steem trades.

Plagiarism comes in different forms. I learnt that reposting even something you have authorship over(a post that is a 100% yours) is considered self-plagiarism. All sorts of plagiarism is highly frowned upon on steemit so I have to draw the awareness of a whole lot of newbies including myself to this fact as I’m convinced a lot of don’t know this. @njaywan, my country rep educated me on this a few days ago. I am glad he did. I’ll share this information to as many newbies like myself as I can.

POWERING UP DOESN’T MEAN YOU LOST YOUR STEEM

Powering up is a great way to earn by curation and gives you more influence on steemit . I discovered that investing in my steem power doesn’t mean I’ve lost my steem but that I just locked it down into my account or the steem blockchain, kind of returning it to the decentralized system. Powering down is HIGHLY NOT ADVICED, and adversely affects the value of steem, but you can do it when you ABSOLUTELY have to. At first I always assumed that after powering up, your steem is just gone. I had this mentality that we were kind of paying to earn more steem power for curation rewards and influence.

A lot of us have observed that the our rewards from votes sometimes changes overtime with no further increase or decrease in number of votes. I always wondered why this was until I texted Med(@massachussets) and learnt that the value of my votes in SBD rises or falls with adjustments on the value of SBD in the market.

WHAT DOES THE NUMBER NEXT TO YOUR STEEM POWER MEAN?

You see that number with a hashtag right next to your steem power? If you’re a newbie I bet you don’t know what it means. Some old steemians might not know this either. Well I learnt a week ago that it ranks your steem power on the steem blockchain. I always thought it ranked your reputation but comparisons I made proved me wrong. Now this didcovery led me to the biggest and actually most surprising discovery I made just recently.

STEEMCURATOR01 DOES NOT HAVE THE HIGHEST STEEM POWER ON STEEMIT

From the moment I joined steemit, the biggest person everyone has talked about has been @steemcurator01 with a 10,258,606 SP. I always thought he had the highest steem power until I learned just yesterday that @upvu had the highest SP of 17,708,077 SP. I bet you didn’t know this either.

A WAY YOUR REPUTATION INCREASES

This next one is more of an observation I made and I think I’ll be right to draw a conclusion. I’ve observed that the reputation increases everytime influential people like @steemcurators and boomings upvote you. I noticed this from observations I made from my own account.

Thanks so much,that is great things you have learnt lately in Steem. My pleasure 😃

It’s fun for me when I learn new things especially about steem. I hope my discoveries and tutorial is helpful to some people. I have to say again that I was really surprised learning about upvu.