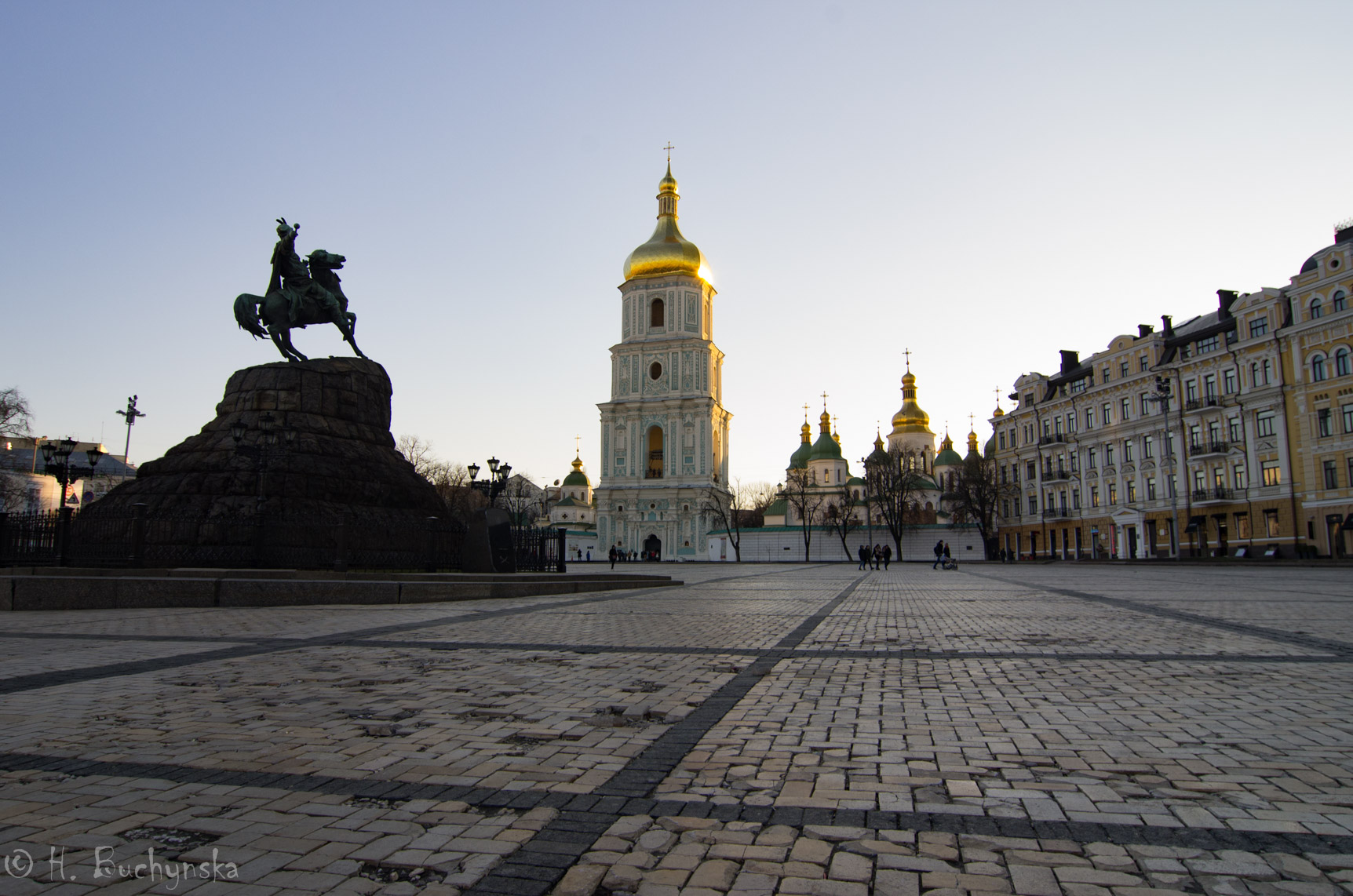 One of the most famous sites, and main tourist attractions, which have become one of the "visit cards" of Kyiv and Ukraine. It is Sofiyivska Square. And for those of you who're interested, I share some of its interesting story illustrated with my photographs.

The square is named after St. Sophia Cathedral - the most ancient monument of Kievan Rus. Without exaggeration, it was and still remains the very heart of the city. The most important events are help here: festivals, celebration of the NEW YEAR, meetings and protests. Its pictures decorates greeting cards, photo albums and lots of articles. It is the first Ukrainian monument on the UNESCO list.

When Yaroslav the Wise defeated the Pechenegs on the site of the square. In ancient times, it was located out of city walls. In memories of that battle rose the cathedral. Later in 1054 the Prince of Kiev Yaroslav the Wise was buried here. At the other end the square is limited by St. Michael's Golden-Domed Monastery. Nowadays this large space is divided into 2 squares.

But a little bit of history. Historians believe that the construction of St. Sophia cathedral began in 1011, and ended in 1018. Therefore, this place is more than 1000 years old! It was re-planed and rebuilt, and there was a lot of drama in its history.

I once took a guided tour around downtown, and I was surprised with what I found out. In the XX century the main shrine of the country was threatened with destruction three times. All these cases are related to the rule of the Soviet regime.

After the capital of the Ukrainian SSR was moved to Kiev in 1943, they decided to build a government quarter in the historical center. Architectural project was very ambitious - to make the largest square with a huge stars as a place for parades that could be seen from a stratosphere!! For this purpose, many historical monuments were destroyed, including unique St. Michael's Golden-Domed Monastery with cathedral. It was rebuild not long ago, in 1998 and you can see it in the photo below.

St. Sophia Cathedral was saved thanks to the intercession of the French government, which called for the preservation of the monument of Yaroslav the Wise, the father of Anna of Kyiv queen of France (1051-1060).

The threat of destroy again hung over the St. Sophia in 1941, when retreating Soviet troops used scorched earth tactics.

It was the unprecedented destruction of old Kiev. The Red Army retreated without a flea. And a few weeks later, the city suddenly shook with a blast of explosions blasted into hundreds of buildings. Later they tried to attribute these crimes to the fascist invaders. From the "Kyiv Diary" of Dr. Nándor Fettich: "Mining of buildings at Khreshchatyk (main street of the city) began before war. Soviet power expected that sooner or later the separatist tendencies of the Ukrainians will cause fighting here. Mine laying was carried out as follows: residents of houses were temporarily relocated. They were told that their houses will be "repaired" free of charge. A large number of explosives were built into the foundation, then all the rooms in the house were again painted or wallpapered and the residents were returned to the homes with replaced walls. In one of the huge houses, the Germans found 3000 kg explosives in the walls.”

But what about St. Sophia? In one of September's nights, a truck with explosives came into the yard. The Soviet military was asked to show the basements. The director replied that there are no basements at all. He lied, and this lie saved the cathedral.

For the third time, the Sophia Cathedral was threatened by the Nazi invaders when they passed and destroyed Kyiv before retreating. At that time the cathedral was saved by its guard.

Anyway, this is what has survived, and I hope it will stands one more thousand of years.

In the center of the square you see the statue. It is Bohdan Khmelnytsky on the horse. He is Hetman (head of state) of Zaporizhian Host. The monument was made for funds of the community. There are a few legends related to his pose and direction he points. It was not an easy task to choose the correct location of the monument so as not to offend the buildings (cathedrals), or (more globally) cities and the territories on the map to which his mace and, conversely, the horse’s croup is directed.

Worth mention the active fire station with tower among other famous construction. It was finished in 1857. It is at the photo below, in the distance.

A firefighter stood on the top of tower and looked for a fire in the city. If he noticed smoke, he raised a combination of signs (of crosses and balls) to indicate the area of ignition. Very creative, as for me.

I think it is all for today to show that it is a place worth to visit, nice photo location, very easy to get by public transport, and free of charge! Well, see you there! (one day, yeah?) :)

Hey @zirochka, here is a little bit of BEER from @pixresteemer for you. Enjoy it!

Very much appreciate your support,
@oldmans!

You are very welcome!

Wow, so much information what we don't learn at school and such nice photos. I like this fire station or fire tower and these golden domed roofs very much. They look great in the sun.
Very good article @zirochka, have a great weekend 😊

I would be quite !DERANGED if I didn't give you a !BEER and a !COFFEEA for this $trdo post 😉

It may sounds weird but we didn't learn it at school 😄 Thanks God times has changed.
I do appreciate your nice feedback and so glad that you liked it ) I was going to take more recent shots with NY decorations but holiday times it so busy.
Great to hear from you and what about !BEER ? :)

You are much welcome, dear @zirochka, and thank you so much for the beer ;)
I also think that it's good that the times have changed and that the kids now also learn the things the former government wanted to keep silent when you were young.

I might be a bit !DERANGED but not only I have a !BEER for you, but also a !COFFEEA which I have bought at the !MARLIANS !shop 😉Posted with ![](https://cdn.steemitimages.com/DQmbroYujK9LNd2s8zDKPUCADmseyJDuNbhwBPrrF7xM8FL/logo-comment.png)

You're so sweet, and thank you! It was a long and challenging day for me, and tomorrow is even more important. There was a moment when I'd appreciate it all - a beer, coffee and a cigarette as well, lol. Thanks God it's over ;)
Have a good rest, good night, Johann! 😊😴🌜

Good morning @zirochka 🙂
So you don't want me to give you any !BEER nor !COFFEEA anymore? ;) lol
I haven't drunk any beer for about 3 years and have had my last cigarette on July 15, 2018 - I know what you mean 🙂 ... but I still need my coffee in the morning 😉Posted with ![](https://cdn.steemitimages.com/DQmbroYujK9LNd2s8zDKPUCADmseyJDuNbhwBPrrF7xM8FL/logo-comment.png)

I think it's an absolute happiness to love what you do, I hope you understand what I mean.
I am much better today ;) Thanks to you too!
Merry (Orthodox) Christmas!

I'm not sure, but I think a virtual !BEER or a virtual !COFFEEA cannot be bad for you ;)
Ah, tomorrow is January 7th - Merry Christmas to you and your family, dear @zirochka🙂Posted with ![](https://cdn.steemitimages.com/DQmbroYujK9LNd2s8zDKPUCADmseyJDuNbhwBPrrF7xM8FL/logo-comment.png)

You just received DERANGED @zirochka Keep up the great work, view all your tokens at steem-engine.com

Hey @johannpiber, here is a little bit of BEER from @zirochka for you. Enjoy it!

You just received DERANGED @zirochka Keep up the great work, view all your tokens at steem-engine.com