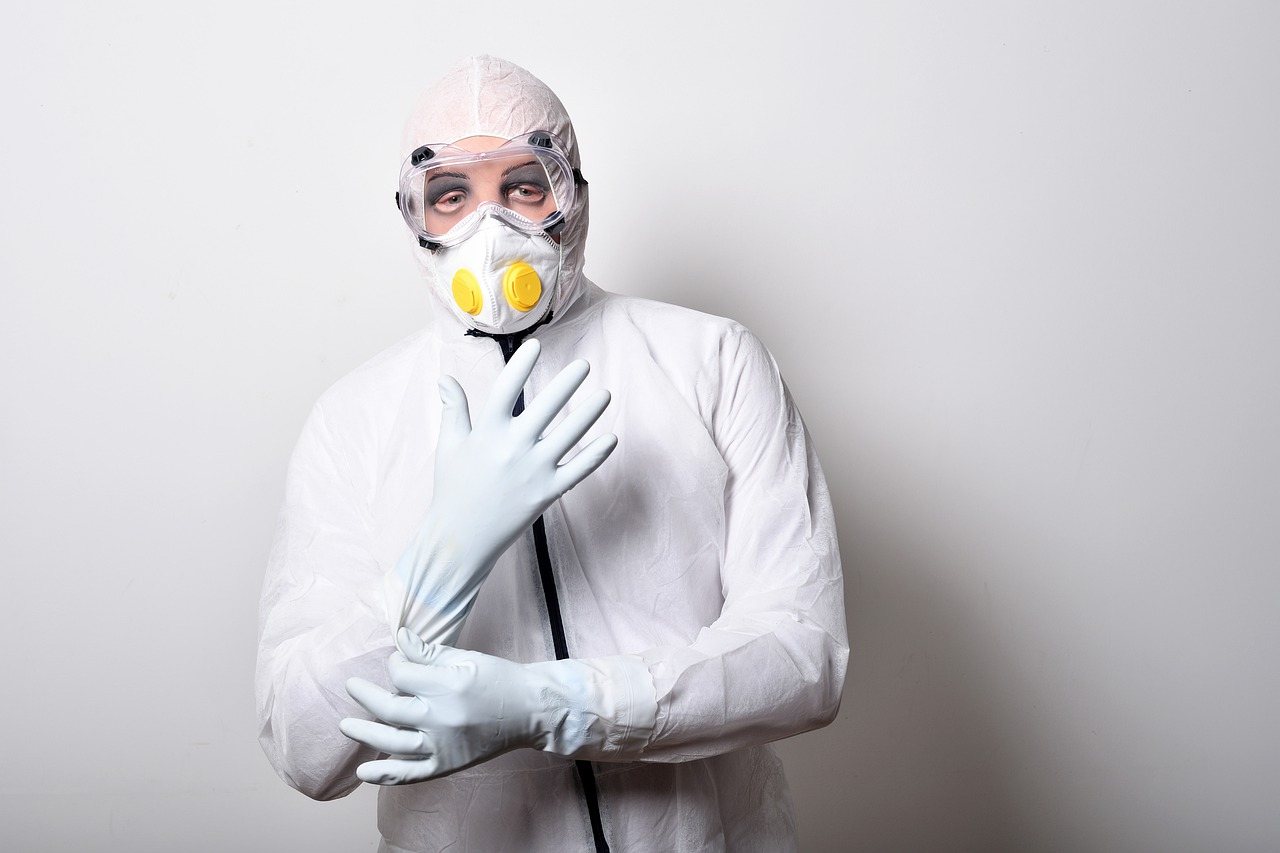 In my entire lifetime, I have never seen so much panic over a potential global pandemic. Emergency supplies are flying off the shelves, people are going to great lengths to avoid public gatherings, and flu masks are selling out all over the world. I was recently talking to a friend of mine who lives in Florida, and he told me that he has seen a number of people already wearing masks out in public. But we haven’t even had 20 confirmed cases of the virus in the United States yet. If people are freaking out this much now, how bad will things get when the number of confirmed cases in the U.S. reaches 20,000?

As the level of fear about a pandemic rises, it is inevitable that some people will start doing really stupid things.

For example, just a few days ago a man in Illinois decided to walk into a Wal-Mart wearing a yellow face mask, and he really startled other shoppers when he began spraying down all the merchandise with Lysol…

A man wearing a yellow face mask and a sign on his back reading, ‘Caution, I have the Coronavirus,’ walked into a Walmart store in Illinois on Sunday and sprayed Lysol on merchandise, police said.

The man entered the store in Joliet with another man at around 4pm and began spraying what turned out to be disinfectant on produce, clothing, and health and beauty items, according to The Chicago Tribune.

Over in China, the level of craziness is far worse.

At this point, flu masks are worth their weight in gold in China, and one city actually decided to hijack a shipment of masks that was intended for another city…

The government of Dali City, situated in the southwest province of Yunnan, ordered the “emergency requisition”, according to state media reports. Hospitals, towns and cities across China have been scrambling to get their hands on whatever medical supplies they can as the outbreak drains resources, sparking a country-wide shortage as the number of confirmed cases nears 30,000 (with the real number still suspected of being much higher).

The masks stolen by Dali were on their way to the city of Chongqing. When Chongqing told Dali to give the masks back, the government replied that it was too late, and that the 598 masks had already been distributed to its citizens.

Right now, cities in China with a combined population of more than 50 million people are under quarantine. We have never seen the Chinese government do anything like this before, and at this moment major streets in those quarantined cities are virtually empty. Millions upon millions of people are deathly afraid to leave their own homes because they might catch the virus.

Shocking videos have emerged of Chinese policemen locking up suspected patients in their home, vigilantes beating up sufferer’s family members and a cleaver-wielding potential carrier fighting off police as the country tries to tackle the new coronavirus.

But being locked up in your own home would definitely be preferable to being shipped off to a mass quarantine camp, and it is being reported that officials in China are converting several large facilities for such purposes.

Meanwhile, the medical system in China continues to be absolutely overwhelmed. According to a Bloomberg report, some people are standing in line for up to eight hours just to get tested for the virus…

People are queuing for eight hours just to get tested for the coronavirus, said the college graduate, John Chen, who’s 23. His feverish mother is yet to be tested.

“At first I was upset that the hospitals and officials I called for help weren’t willing to do their job, but later I realized that it’s not that they are unwilling to help, but that everywhere is way too short of resources,” he said.

Chinese citizen journalist Chen Qiushi is also confirming that this outbreak is way too much for the system to handle, and he has personally seen dead bodies waiting to be shipped off…

There was a video that showed three dead bodies lying in a Wuhan hospital’s corridors circulating widely online before. I was told by some nurses in a local hospital that the video was true. The nurses also said this situation was because the local funeral homes did not have the capacity to transfer all those bodies. I have seen bodies many times during the past days, which makes me feel emotional. I saw two dead bodies at a hospital, one was lying in the corridor, and one was in an emergency room being wrapped up by nurses… I could not take a close shot of them because that would be disrespectful to the deceased. It is not unusual for bodies to be seen in hospitals, but the fact they were left there for a long time means it is an abnormal situation. The fact the bodies were lying there means even funeral homes are struggling to deal with the number of bodies waiting to be picked up.

The reason why there is a backlog of dead bodies is because there aren’t enough cremation centers to handle them all.

As I wrote about yesterday, the crematoriums in Wuhan have been burning bodies 24 hours a day for several weeks.

Here in the U.S. we haven’t had a single death from the virus yet, but the federal government is already converting military housing locations into potential quarantine camps…

The Defense Department expects to announce today that 11 additional military housing locations have been approved to accept people for quarantine if public health authorities believe there are coronavirus concerns, according to two US officials.

The request for the additional military housing has come from the Department of Health and Human Services and has been preliminarily approved by the Pentagon.

If the number of cases continues to rise at an exponential rate around the world, we are going to have a nightmare on our hands very rapidly.

We are living in unprecedented times, and you should use the time that you have left to get prepared for what is ahead.

According to Ready.gov, here are some of the ways you can prepare before a pandemic arrives in your area…

Store a two week supply of water and food.
Periodically check your regular prescription drugs to ensure a continuous supply in your home.
Have any nonprescription drugs and other health supplies on hand, including pain relievers, stomach remedies, cough and cold medicines, fluids with electrolytes, and vitamins.
Get copies and maintain electronic versions of health records from doctors, hospitals, pharmacies and other sources and store them, for personal reference. Get help accessing electronic health records.
Talk with family members and loved ones about how they would be cared for if they got sick, or what will be needed to care for them in your home.
And once a pandemic begins, here is a list of things that they suggest you should do…

Avoid close contact with people who are sick.
When you are sick, keep your distance from others to protect them from getting sick too.
Cover your mouth and nose with a tissue when coughing or sneezing. It may prevent those around you from getting sick.
Washing your hands often will help protect you from germs.
Avoid touching your eyes, nose or mouth.
Practice other good health habits. Get plenty of sleep, be physically active, manage your stress, drink plenty of fluids, and eat nutritious food.
It is very interesting to note that the Department of Homeland Security recently updated their preparedness information to include a link to the CDC’s “About Human Coronavirus” page.

Even as they work very hard to try to keep the public calm, there are all sorts of indications that government officials believe that this is a very serious threat.

Let us hope that this outbreak fizzles out very soon, because if people start dropping dead on the streets of the U.S. like they have been in China, the level of panic that would cause in our country would be off the charts.