The Democrats & Iowa – Biden is really out of the Game 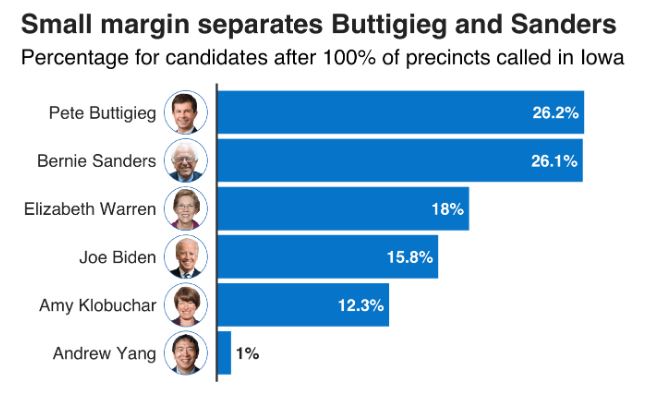 Pete Buttigieg and Bernie Sanders were the winners in Iowa. Biden is really dead in the water as is Elizabeth Warren. We will most likely see Hillary enter the game as a draft at the convention. We can see why the Democrats are so intent on trying to remove Trump. They know they stand zero chance of defeating him so they are trying to rig the election by using impeachment to remove him from office.

t really appears that the Democratic Party will self-destruct. We may see it split between the extreme left which is really Marxist and the more traditional liberal members. As I have stated many times, the Democrats have been making lower highs. They peaked when they were the party that stood for slavery against Abraham Lincoln, which was the peak for the Republicans which bottomed during the Great Depression. The Republicans have entered a bull market since then on our system models. The low for the republicans was 19% in 1937-1939. The dip in 2009 generated Bullish Reversals which have been elected. From the last high in the Democrats, 2009-2011, they elected a DOUBLE Yearly Bearish Reversal. There is not resistance at 47% and major resistance at 58% for the combined Senate & House. The Republicans are above critical support on all levels.