Terrorist Targets: The Ten Countries Which Suffer Most From Terrorism 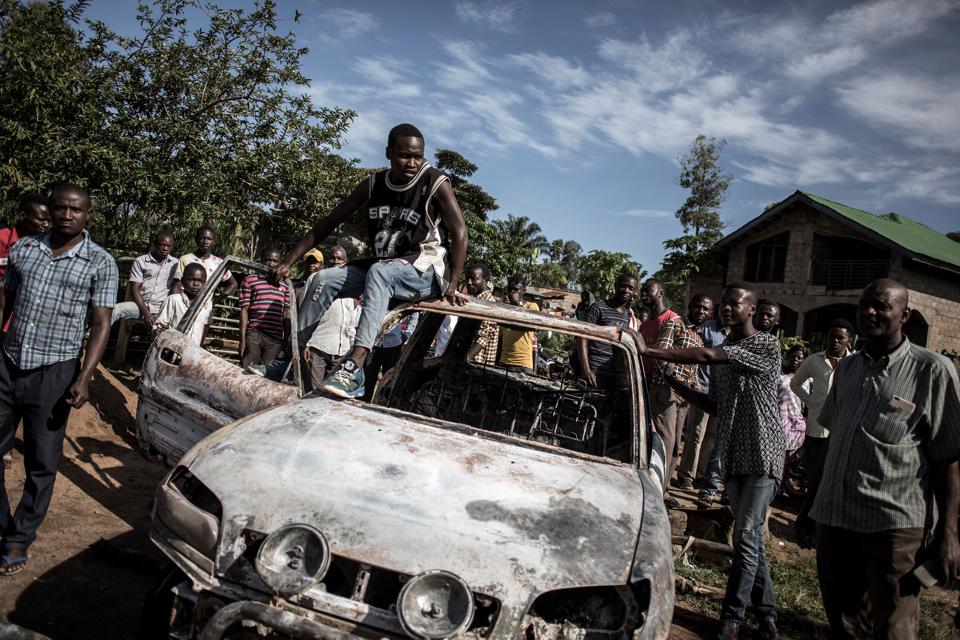 For the first time since it was invaded by U.S. forces in 2003, Iraq is no longer the country most affected by terrorism, according to new research released today.

The latest edition of the Global Terrorism Index, produced by the Institute for Economics and Peace (IEP), finds the number of deaths caused by terrorism in Iraq fell by 75% between 2017 and 2018, with 3,217 fewer people being killed. Even so, some 1,054 people were killed in the country in terrorist atrocities last year.

While the situation in Iraq has improved following the territorial defeat of Islamic State, in other parts of the world things are getting much worse. Last year four countries recorded a large increase in deaths from terrorism. Mali, Mozambique and Nigeria all saw more than 100 additional deaths while Afghanistan, which has overtaken Iraq at the top of the table, suffered 2,700 more fatalities.

The Global Terrorism Index ranks 163 countries according to the impact of terrorism, based on factors such as the number of attacks, fatalities, injuries and the extent of property damage. The definition of what is included covers intentional acts of violence by non-state actors but not acts of state-sponsored violence, so it offers only a limited insight into the overall level of violence or political freedom in a country. Indeed, many of the countries at the safer end of the list are among the world’s most repressive, including Belarus, North Korea and Eritrea.

Overall, 98 countries suffered less from terrorism last year, while 40 saw things get worse. Despite that improving picture, terrorism continues to pose a threat in the majority of countries. Last year, 103 countries recorded at least one terrorist incident and 71 suffered at least one fatality as a consequence. “The breath of terrorism is still near record levels,” says Steve Killelea, founder and chairman of the IEP.

Conflict remains the primary driver of terrorism, according to the researchers, with over 95% of deaths from terrorism occurring in countries involved in a civil war or cross-border conflict or battling domestic militants – something that is true of all ten countries at the sharp end of the index. “Terrorism is quite often used as a tactic in war,” points out Killelea.

MORE FOR YOU
Biden Administration Urges Supreme Court To Let Cops Enter Homes And Seize Guns Without A Warrant
Study Finds U.S. Lockdowns Didn’t Make A Big Difference In Stopping Covid—But That Doesn’t Mean They’re Pointless
Stacey Abrams-Founded Group Sues Georgia Over ‘Voter Suppression Bill’
The global economic impact of terrorism was $33 billion in 2018, 38% lower than in 2017. This amounts to a small fraction of the total global cost of violence which was equal to $14 trillion last year, according to the IEP – this larger figure encompasses other forms of violence such as homicide, armed conflict and military expenditure.

According to Killelea, 2019 appears to be witnessing a further improvement. “Unless something radically different happens I’d expect terrorism deaths to have declined again in 2019,” he says. If that prediction is borne out it would mark a fifth consecutive year of improvement.

However, in some areas the situation is getting worse. While the suppression of Islamic State and other similar groups has contributed to a fall in the level of Islamist terrorism in the West, the danger from far-right terrorism is increasing in Europe and North America. “The vast majority of deaths [from far-right terrorists] are in the U.S. and Canada,” says Killelea. “We put that down to the availability of guns.”

The U.S. is currently ranked 22 in the IEP list (an improvement of two places since last year’s index). Above it, the ten countries that suffered the most from terrorism in 2018 are, in reverse order:

10 – Democratic Republic of the Congo

A year ago, the DR Congo was ranked 11th in the world in terms of the impact of terrorism, but this year it is included among the 10 worst countries (Egypt has dropped out of the list of ten), as a result of the activities of groups such as the Allied Democratic Forces (ADF), the Democratic Front for the Liberation of Rwanda (FDLR) and Mayi Mayi militias.

Last year there were 135 terrorist incidents in the central African country, leading to 410 deaths and 145 injuries. The assaults have tended to be concentrated in the east of the country, near the borders with Uganda, Rwanda and Burundi. The most frequent forms of terrorism in 2018 were hostage taking and armed assault, which between them comprised 84% of the attacks.

Terrorism activity in Pakistan has been falling for the past five years, but it still remains one of the five deadliest countries in the world for violence by non-state groups. Last year 537 people were killed and 1,016 injured in 366 incidents. Those figures represent an improvement of 81% in terms of the number of deaths and a fall of 77% in terms of incidents since 2013, when terrorism was at its worst in the country.

The deadliest group is the Khorasan Chapter of Islamic State, which accounted for 251 of the deaths last year. It was followed by Tehrik-i-Taliban Pakistan which killed 151 people. Another group which had been very active in the past, Lashkar-e-Jhangvi, was relatively quiet last year, carrying out just two attacks and killing six people.

While war is still raging across many parts of the country, the fighting has become less intense in many areas, contributing to a 40% decline in terrorist-related deaths last year to 662. Alongside that, there were 725 injuries from the 131 terrorist incidents. Aleppo was the worth affected part of the country, followed by Idlib, the capital Damascus and Deir es-Zour in the east.

The fall in deaths is in part a result of the largely successful campaign against Islamic State – last year the group was responsible for the lowest number of deaths since 2013. However, Islamic State remains the most lethal group in the country. It, along with the Kurdistan Workers Party (PKK) and Hayat Tahrir Al-Sham, were still responsible for 77% of terrorist deaths last year.

Nigeria accounted for 13% of all terrorist-related deaths globally in 2018, with a 33% rise in the number of fatalities compared to the year before – that translates into 2,040 deaths and 772 injuries from the 562 terrorist incidents. Despite that rise, the total number of deaths was still 72% below the peak in 2014.

The deadliest group, Boko Haram, continues to be put under pressure by a multinational task force set up by the government of Nigeria with assistance from Cameroon, Chad and Niger and, as a result, it was responsible for fewer deaths last year than the year before. However, the danger from other groups is rising. The IEP says the increase in deaths across the country in 2018 was a result of extremist Fulani groups who have become more active and were responsible for 1,158 deaths last year (compared to 589 for Boko Haram). Between them, Boko Haram and the various Fulani groups accounted for 78% of attacks and 86% of terrorist deaths last year.