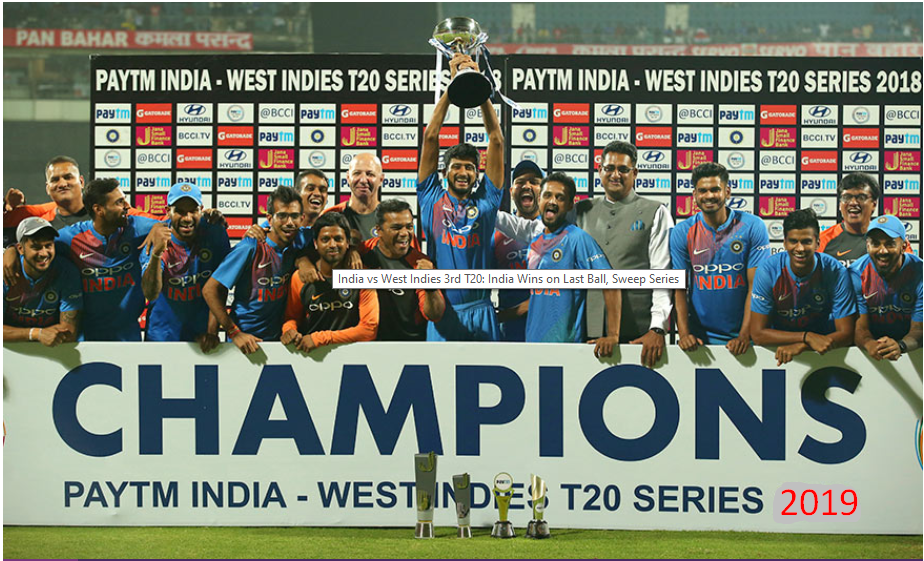 Today, according to Indian Time, the game started at 8:30 pm. West Indies won the toss and decided to bat first. Even today, like the first two matches, the West Indies team could not do much. West Indies scored 146 runs at 6 wickets in 20 overs. West Indies' 3rd wickets were fell for just 14 runs. Evin Lewis, Sunil Narine, Shimron Hetmyer and Carlos Brathwaite (c) again failed, Evin Lewis scored 10 runs in 11 balls, Sunil Narine 2 runs in 6 balls, Shimron Hetmyer 1 run in 2 balls and Carlos Brathwaite (c) 10 runs in 7 balls. Kieron Pollard and Rovman Powell did well, Kieron Pollard scored 58 runs help out of 6 sixes and 1 boundary in 45 balls, Rovman Powell 32 runs help out of 2 sixes and 1 boundary in 20 balls, he played match till the end. Nicholas Pooran (wk) also played well he scored 17 runs help out of 1 six and 1 boundary in 23 balls. West Indies target total of 146 runs for India.

Now India's innings start from here. Lokesh Rahul and Shikhar Dhawan came for the opening, Lokesh Rahul was out in 20 runs with 1 six and 2 boundaries he played 18 balls. Shikhar Dhawan was out in only 3 runs he played 5 balls. Virat Kohli (c) and Rishabh Pant (wk) both are played very well. Virat Kohli scored 59 runs help out of 6 boundaries in 45 balls. Rishabh Pant who failed in both the previous matches, today he played very well and he played till win the match. he scored 65 runs to help out of 4 sixes and 4 boundaries in 42 balls.