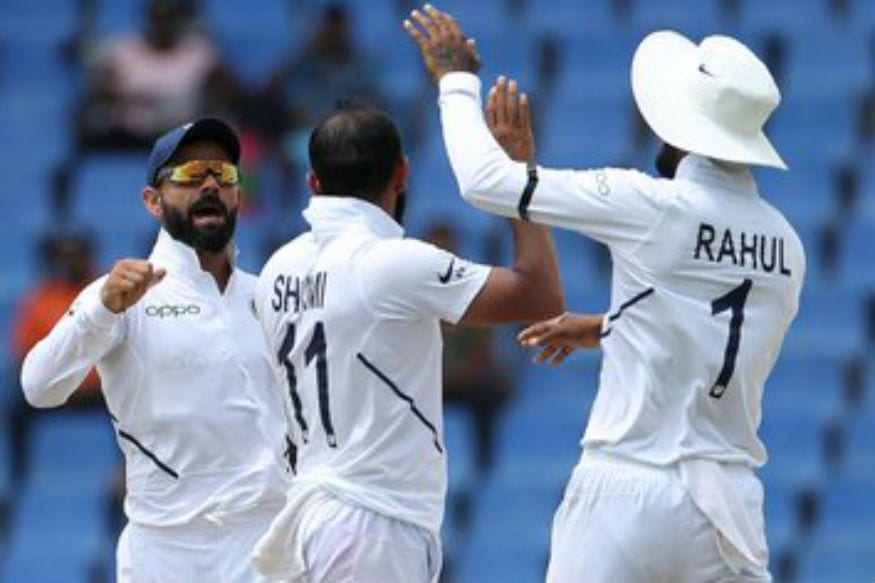 Hello friends, today I'm going to discuss, what happened 3rd-day of 1st test match of India vs West Indies. without talking too much let's start on the topic.

As we saw before the end of the game, West Indies had scored 189 runs for 8 wickets. Moving on from here, the third day of play, Jason Holder and Miguel Cummins were at the crease, Jason contributed well to the team, he scored 39 runs in 65 balls, till the crease. One could not do much as one wicket kept falling at zero and the West Indies' first innings ended at just 222 runs.

After a while, India's second innings Start Hoovi, Lokesh Rahul and Mayank Agarwal came to start the innings, India's first wicket fell at 30 as Mayank Agarwal, contributed 16 runs by playing 43 balls for the team. Cheteshwar Pujara came in as the next batsman, both of them batted well for a while, taking 73, then Lokesh Rahul was dismissed for 38 in 85 balls as the second wicket. Captain Virat Kohli himself came in at number three, shortly after that Cheteshwar Pujara was bowled by Roach, contributed 25 runs by playing 53 balls for Cheteshwar Pujara, the entire team had lost 3 wickets by scoring 81 runs. The next batsman Ajinkya Rahane came to support for Virat Kohli, both of them batted excellently, taking the team score to 185, Ajinkya Rahane and Virat Kohli remained on the wicket till the third day's play ended, Ajinkya Rahane scored 53 runs in 140 balls and Virat Kohli had scored 51 runs in 111 balls. By the end of the third day's game, India has scored 185 runs losing 3 wickets.