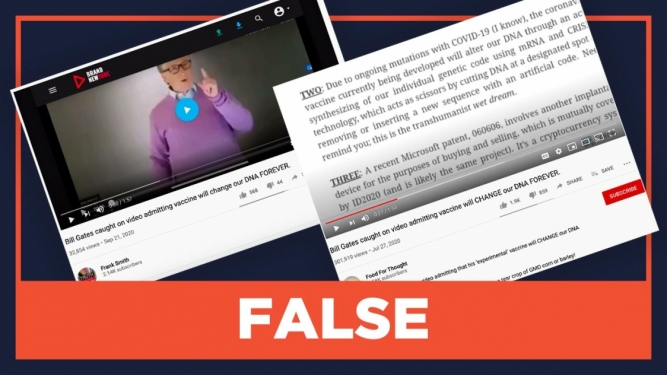 I've been flabbergasted by the amount of mis-information and spreading of conspiracies of mRNA altering DNA which has lead me to write an explainer on why the mRNA oligo in the Pfizer/BioNTech and Moderna vaccines can't possibly alter our DNA.

This is probably the most challenging explainer I've ever written because the cellular and molecular biology involved is relatively complex and I'd like to hand-wave away as little of that complexity as possible while keeping this readable to the intelligent laymen that doesn't read cellular biology textbooks for fun and profit.

A quick refresher on some cell biology: the cell is surrounded by a cellular membrane, and enclosed within this cellular membrane is a salt-water(ish) plasma we call cytosol. Suspended in the cytosol are organ-like structures called organelles. This write-up will focus on one organelle in particular - the nucleus - with guest appearances by other organelles such as "ribosomes" and "mitochondria".

Let's get mitochondria's guest appearance out of the way right now: as we all learned ad nauseum in our 9th grade biology class "mitochondria are the powerhouse of the cell". Besides being tiny little power-plants, there is one other function of mitochondria that we should cover. As most readers already know, the overwhelming majority of the 30,000 or so genes in the human genome are found in 23 pairs of the DNA double-helix in the nucleus of the cell. There are 13 exceptions to this... 13 genes that are not within the nucleus, but are instead found within a small, circular DNA molecule in the mitochondria. I am mentioning the mitochondrial DNA here only to acknowledge that it exists, and to do the one major hand-wave that I'm going to allow myself: mRNA is incapable of altering mitochondrial DNA for reasons that are beyond the scope of this paper. With that, we bid adieu to the mitochondria, tell it that we will mail it a lovely gift for appearing on our show, and usher it off the stage.

Back to our refresher: as mentioned, virtually all of those 30,000 genes of ours live in the nucleus. Each of those genes serves as the blue-print for a protein. (To be a little more exact, each gene can serve as the blue-print for multiple different proteins). How do we get from that blueprint (a gene) to the actual physical protein that is encoded by that gene? Via the bombastically named "Central dogma of molecular biology". This "central dogma" is nothing more than the first couple pages of the "biology of the cell" textbook we all read in 10th grade: DNA is transcribed into mRNA, mRNA is exported from the nucleus into the cytosol, the mRNA eventually bumps up against a ribosome, and the ribosome translates the information encoded in the mRNA into a protein. There are a few other moving parts in that process (if tRNA is out there in the audience somewhere, stand up and take a bow), but that's the general outline of the process that makes us "us".

Go back and re-read the previous paragraph and commit to memory the fact that "DNA is transcribed into mRNA". It will be on the test.

So what stands between our enthusiastic, young mRNA molecule from the vaccine, and its life-long dream of becoming part of our DNA? (And here I would like encourage the reader to hum the song "Dream the Impossible Dream") The two windmills against which our bold but hapless mRNA molecule must tilt in order to achieve its dream of altering our DNA are 1: endonucleosis (i.e., how's it going to break into the the nucleus?) and (if it could find a way to enter the nucleus),2: how is it going to execute the reverse of the standard transcription process and archive itself in the DNA?

Spoiler alert: it's not. Our plucky little mRNA molecule is about to run smack into two hard realities. Feel free to insert your own Don Quixote references here.

Let's start with the problem of endonucleosis, which is a fancy way of saying "getting into the nucleus".

The nucleus is surrounded by an envelope (called the "nuclear envelope", which sounds like something we should keep away from our least favorite president) made of two distinct layers of lipids. Lipids are just molecules of (essentially) fats, and are fairly boring as molecules go. Embedded within the nuclear envelope are complex arrangements of proteins that serve as as pore, or gateway through the envelope. Each of these is called, appropriately enough, a "Nuclear Pore Complex", or NPC. Video game players should feel free to snicker and insert your favorite NPC joke here.

There are essentially two ways for a macromolecule to pass through an NPC, the easy way and the hard way. The easy way is called "passive diffusion". In "passive diffusion", if a macromolecule is small enough, Brownian motion (the eternal jiggling of atoms and molecules that Einstein got a Nobel Prize for explaining) will occasionally push the molecule in question through the NPC. Imagine a wild party in a home packed shoulder to shoulder with revelers, with everyone slam-dancing and flailing and vibrating wildly: if the bathroom door is open, every now and then, someone is going to get bounced through the bathroom doorway.

So could this be our plucky mRNA hero's route into the nucleus?

There is an upper limit to the mass of a molecule that can be transmitted through an NPC via passive diffusion, and that limit is about 60 kDa. (1 Dalton or "Da" is roughly the mass of a proton. 1 kDa is roughly the mass of 1000 protons). Sadly for our rats-foiled-again mRNA strand, the mRNA oligo used in the vaccines has a mass of about 1388 kDa. Our fat-boy mRNA molecule is just too tubby to squeeze through the ductwork. It'll have to find another way in.

When we first spoke of the NPC, I mentioned that there's an easy way through ("passive diffusion") and a hard way through. So what about the hard way.... is that route open to our mRNA molecule?

Remember when I said that the nuclear envelope is composed of two distinct layers? Each NPC spans both of those layers and has a distinct "inside" and "outside". The NPC itself is composed of specialized proteins called "nucleoporins", but we're just going to call them "nups" because (A) that's adorable, and (B) that's what everyone else calls them.

So, back to describing "the hard way in". For molecules that are too large to fit through an NPC via passive diffusion (and we're looking at you mRNA fat-boy), there is an option for nups to mediate their passage. There are several different kind of nups, and each kind is capable of admitting a specific kind of molecule. Remember way back there when we said that mRNA is exported from the nucleus into the cytoplasm in the hopes of hooking up with a lonely ribosome? The nups on the inner-side of an NPC are specialized in such a way that they are capable of admitting mRNA and mediating its passage out of the nucleus into the cytosol. What about the nups on the outside of the NPC, the one's facing the cytosol outside of the nucleus? Those nups are specialized in such a way as to admit proteins and mediate their passage from the cytosol into the nucleus, but here's the rub: those nups on the outside of the NPC can admit only proteins (bound by other proteins called "nuclear transport factors"), not mRNA. Those nups on the outside of the nucleus will mediate the flow of proteins into the nucleus, but nothing else... including mRNA. The nups act like a bouncer at an exclusive club: once mRNA has been shown the way out, there is no re-admittance. (If there are any molecular biologists reading this, I intentionally glossed over the details of the Ran-GTP cycle). I should note here that there is a mechanism by which sophisticated reteroviruses (like HIV) can fool the nups into admitting them into nucleus, but that's beyond the scope of this paper.

I had fully intended to continue on to explain the problem of reverse transcription, but I just glanced at a clock and have discovered it's just before 3am. I will pick this up again in a day or two, but for now I am going to go spend the remainder of what Louis Armstrong called "the dark, sacred night" reading a good book that has absolutely nothing to do with cellular biology.

Join us next time for the continuing adventures of "Ye gods, I wish conspiracy theorists would occasionally pick up a biology textbook".