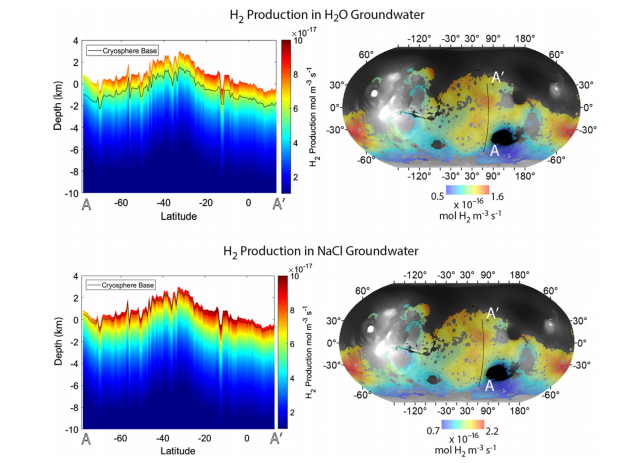 I can't begin to express my joy at finding myself living in an era where we can read papers on astrobiology that are something other than complete speculation and flights of fancy. I suspect that perhaps all of 3 or 4 people might read this, but I'm going to write it anyway.

Those electrochemical reactions that result in one atom donating electrons while another atom accepts electrons are called "redox reactions". The resulting electron transport is what powers all life we have have ever encountered. From human beings, to the mightiest redwood groves, to the tiniest ultramicrobacteria, they are all powered by the electron transport from redox reactions.

Hydrogen is the most common substance in the universe, and it serves as an electron donor. Even in potential biomes where free molecular hydrogen (H2) isn't naturally abundant, if H2 can be separated from water, the possibility of life exists. In high-school, most of us probably did or saw the demonstration whereby if we add enough energy to water (in high-school, we used electricity, in a process called electrolysis), we can split water into its hydrogen and oxygen components. Two other ways to add enough energy to water to cause it to disassociate are by adding heat (in a process called "thermolysis") or by absorbing alpha or gamma radiation (in a process called "radiolysis"). Radioactive isotopes that decay either by alpha decay or gamma decay exist in the crust of all the rocky planets of our solar system. (One of the most common radio-isotopes is U-238, whose decay is used to convert water to steam in nuclear reactors.) We have solid evidence that radioactive isotopes of potassium and thorium are relatively abundant in the Martian crust.

Two years ago, Jesse Tarnas (et al.) published a paper estimating the radiolytic production of H2 in the crust of Mars during the early formation of the solar system, when the inner planets were still being bombarded with asteroids on a constant basis. (This period, known as the Late Heavy Bombardment, is responsible for most of the large craters we see on the moon, and for massive impact features such as the Hellas basin on Mars)

Tarnas & company in their paper in "Earth and Planetary Science Letters" begin:

The paper goes on to demonstrate that radiolysis likely generated concentrations of dissolved H2 capable of sustaining microbial communities in the subsurface of Mars during the early history of the solar system. (3.7 - 4.1 billion years ago). The authors compute estimates for free H2 concentrations in the subsurface habitable zone under various environment scenarios:

Assuming available water was in the form of NaCl brine (i.e., saltwater):

Those concentrations are orders of magnitude greater than the concentrations that are known to sustain microbial life meters below the sedimentary surface at the bottom of the Earth's oceans. The presence of free molecular hydrogen is only one of the requirements for discovering microbial life in harsh environments (also fundamental is the abiotic synthesis of RNA, a process we do not yet understand), but the consequences of radiolytic H2 on Mars is sufficient to suspect that life may have once existed there.

The casual reader can skip over virtually all of the mathematics in this excellently written analysis of life-supporting conditions on early Mars.