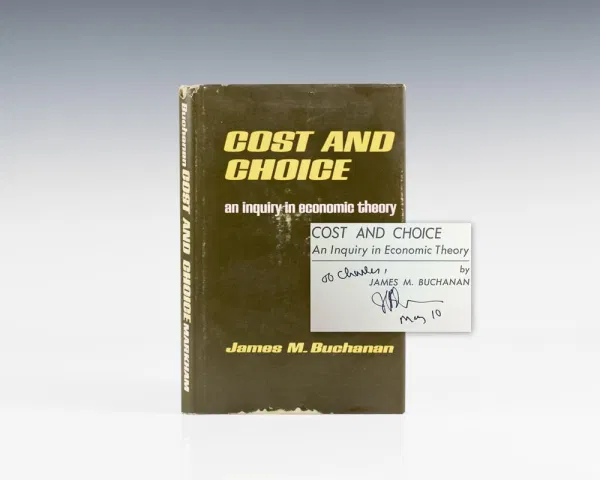 I just finished reading Jim Buchanan's Cost and Choice for the 3rd time. I continue to learn from each reading, with no diminishing returns.

Though it is widely recognized as a classic, one may be forgiven for thinking that its contribution consists of one central idea - the subjective, individualistic, ephemeral nature of opportunity cost - and the distinction between (cost-influencing and cost-influenced) opportunity cost and objective outlays ("real cost" - accounting cost). And if this were all there were to it, it would be substantial.

But, a close reading of the book reveals so many additional subtle implications of this insight that are easily passed over - particularly given Buchanan's economy of expression. His arguments are always precise, but rarely extensive. I feel as if someone with a lot of energy could write a valuable "Guide to Cost and Choice" spelling out, line by line, some of Buchanan's less obvious points and expanding on their implications with revealing applications.

I am much less familiar with Buchanan's vast body of work, than I am with the Austrian literature, but I wonder if it could not be claimed that this little book contains a key set of principles that informed all of what he wrote, a kind of window into the structure of his thinking. In addition, it is to my mind, a solid bridge between Public Choice and (Austrian) Market Process economics. It is clearly Hayekian in nature, and, more surprisingly, Misesian. In fact, astoundingly, it adds a different angle to the Hayekian knowledge-problem. Hayek's knowledge papers are implicitly based on opportunity-cost notions. Buchanan's short analysis complements the Austrian contribution to the Socialist Calculation Debate perfectly - connecting the incentive and knowledge problems.

[Mises was the clearest of the Austrians on opportunity-cost, came the furthest prior to Buchanan and Thirlby along that road. Mises was less encumbered by the need to address the question of neoclassical "economic efficiency", rightfully so. A non-equilibrium economics sheds a lot of confusing baggage]

And, anyone familiar with Ludwig Lachmann's work cannot fail to see an independent, alternative approach to much of what Lachmann was about (Buchanan endorsed Shackle's subjectivism, which was also Lachmann's). I wonder if Lachmann had ever read Cost and Choice. His own arguments, approaching from the direction of individual expectations, would have benefitted greatly from the addition of an opportunity-cost perspective.