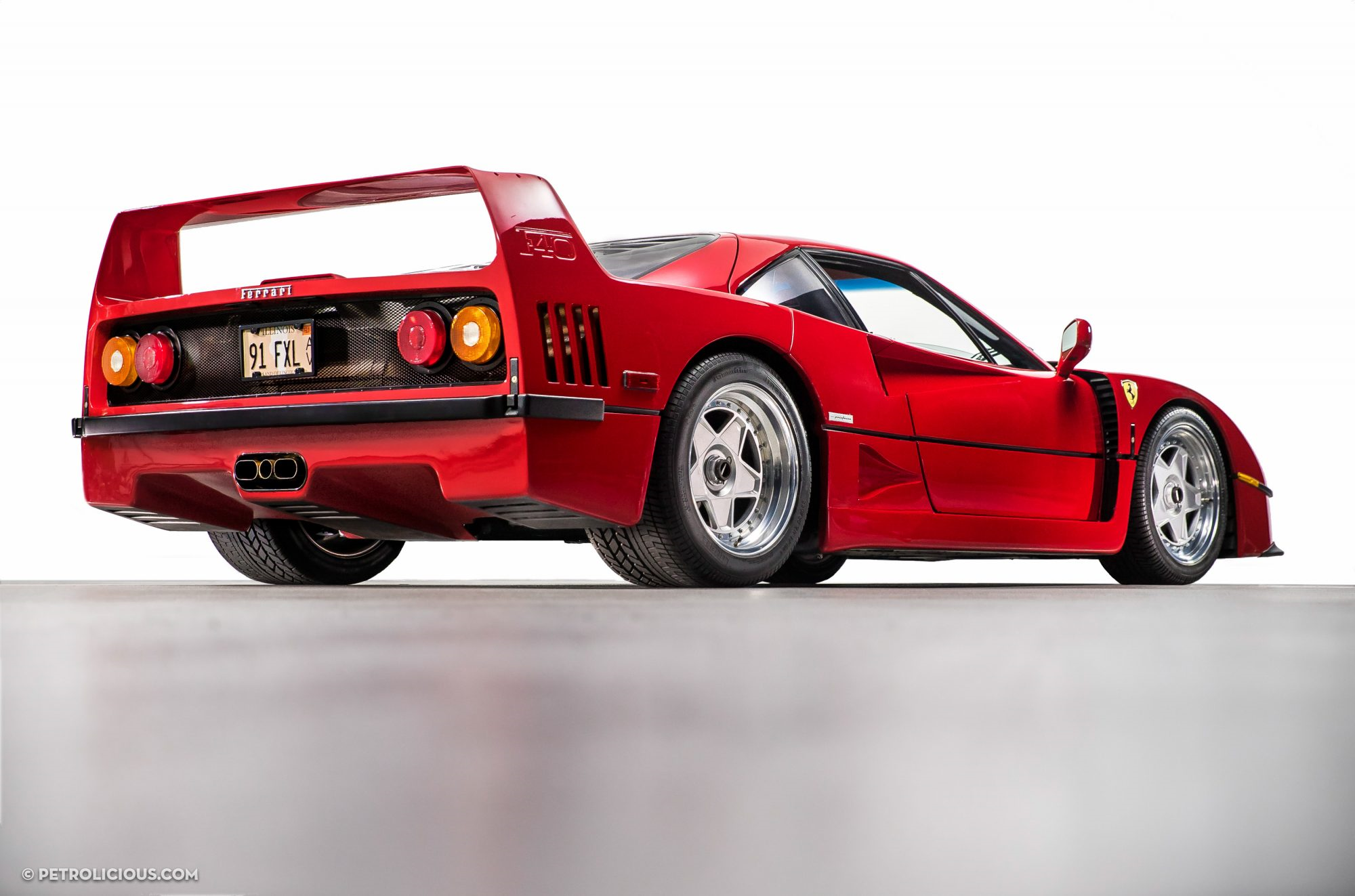 To date, there are approximately 1.3 billion cars all over the world. That's billion, with a strong 'b'. Somewhere in the world, a car is being driven for some purpose.

Either there's taxi ferrying people about, a police cruiser chasing down baddies, a minivan taking children to school, or a muscle car traveling down Route 66.

Whether you choose to use a car as a tool, or to enjoy it as a sensation; every person can understand the importance that the car brings to the world.

Even if you see the car as only an appliance, there's a likelihood that you have that one special automobile to aspire to. We may even have references to it; a poster on the wall, or a laptop screensaver.

I'd like to talk about my dream car; one that aspires me to achieve greater heights, if it meant having a chance at getting into the driver's seat.

To me, there is no greater expression of an automobile as moving emotion, than the quintessential bedroom poster car; the Ferrari F40.

Though I must admit, I had not first heard of this car until the late 2000s; as I was born 5 years after the F40 ran out of production.

But putting aside all that, as soon as I first saw the F40 and started learning more about it, the impression struck a deep note inside of me, pushing me to an urgency of "I want this".

Those purposeful straight lines forming a smooth wedge to cut through the air, that bright red paintwork covering the lightweight carbon fibre body, and those popup headlights.

To me, everything about it is just right.

The F40 was conceived on the remains of the Ferrari 288 GTO Evoluzione; designed to race in Group B rally before the series was shelved altogether. 1986 was Group B's last year, and Ferrari was left with 5 production-ready 288 Evos at Maranello to gather dust.

Since the design of the 288 Evo disqualified them from other racing series; Enzo Ferrari, then 88 years old, decided to re-engineer it as a race car for the road.

Feeling the criticism that Ferrari's cars were "becoming too plush and comfortable", Enzo decided to make his last sports car a true performance machine for the enthusiast, with no expense spared and no compromises.

"We wanted it to be very fast, sporting in the extreme and Spartan"

Enzo Ferrari tasked the mission of building the last of his legacy to engineer Nicola Materazzi; which I may argue to be one of the greatest engineers in the car industry, and someone who is seriously underrated.

Nicola Materazzi, or il ingegnere (Italian for 'the engineer') as he was popularly known, was responsible for some of history's greatest cars including, but not limited to; the Lancia Stratos, Ferrari 288 GTO Evoluzione, and of course, the Ferrari F40.

It was il ingegnere that had convinced Enzo Ferrari and his fellow engineers, to experiment more with turbocharged engines - and what a marvelous decision that was!

The F40 was penned almost completely by Materazzi. He designed the engine, gearbox, suspension, chassis, and most other mechanical components in the car.

Even the Pininfarina bodywork was done with Materazzi's advice. It was noted by a colleague of il ingegnere ; that he had never seen any car engineer design an automobile almost single-handedly from start to finish.

It was noted that only 400 Ferrari F40s were planned by Enzo Ferrari. But due to strong reception from Ferrari's clientele, and urging from Materazzi; il Commendatore (Enzo's nickname) then chose to increase production.

This increased production was suspected due to slowing demand for some of Ferrari's other road cars. Nevertheless, over 1300 F40s were made, until their last production year in 1992.

Materazzi himself later argued that the F40, along with the 512 Testarossa and the 412; had saved Ferrari's reputation, and business from possibly going under.

Looking under the hood.

The F40s 2.9L V8 engine was derived from the road-going 288 GTO; which was then enlarged slightly, and further improvements were made to the IHI (Ishikawajima-Harima Heavy Industries) twin-turbochargers.

The engine produced 471hp and 426lb-ft of torque - according to Ferrari. When given the beans, the F40 can accelerate from 0 to 62mph in 4.1 seconds, and on to an officially claimed 201mph top speed.

Similar to other old-fashioned turbocharged cars, there's plenty of turbo lag. The turbochargers do take some time to kick in; and when they do spool up, the car takes off into hyperspace. It's a classic case of 1-2-step, and nothing really happens until at least 4000rpm.

This is then shrouded under the aerodynamic body. The large, fixed rear-wing adds downforce to improve stability at higher speeds, while the aerospace inspired NACA (National Advisory Committee for Aeronautics; precursor to NASA) ducts/scoops provide excellent airflow and cooling.

The immense speed is further aided by the F40s relatively light kerb weight of about 1300kg. This lightness, one of the F40's main highlights, was due to the construction of the car. The body panels were made of mostly carbon fibre and Kevlar, sitting on top of a steel tubular space frame.

Another contributor to the lightness is the simplicity of the F40. It was decided by Enzo and Materazzi that the inclusion of any computers or electronic aids would impede driver enjoyment.

This was a complete opposite to another 90s supercar of the day; the Porsche 959. While the 959 had advanced AWD, adjustable suspension, and traction control system; the F40 had none of that.

The car will only be as good as the human driver, and gave it a go-kart type feel.

You don't even get door handles; just a cord to do the job.

Since you've read this far into the article (of which I appreciate so much!), I shall gift you some pics and facts on a rather special, and insane F40.

More crucial however, was the removal of more than 300kg of weight, reducing the LM's kerb weight to just over 1 tonne. Then, the engine and turbos were tuned, to make a total combined output of 720hp!

The LMs raced all the way up until 1996 in various endurance and GT championships, including the IMSA series. What is often not talked about, is the fact that the F40 LM remained competitive, gaining podiums long after the end of its production run, even compared to newer cars like the McLaren F1 GTR.

Our sports cars are chosen by people who want to be different, who want a performance which cannot be matched by any other car. Today we're not looking for absolute speed, but instant speed. I believe this is Ferrari's secret; to use ultramodern machinery to obtain extremely detailed parts.

Leave me a comment for your thoughts on the F40, and I'd like to know what your dream car is.