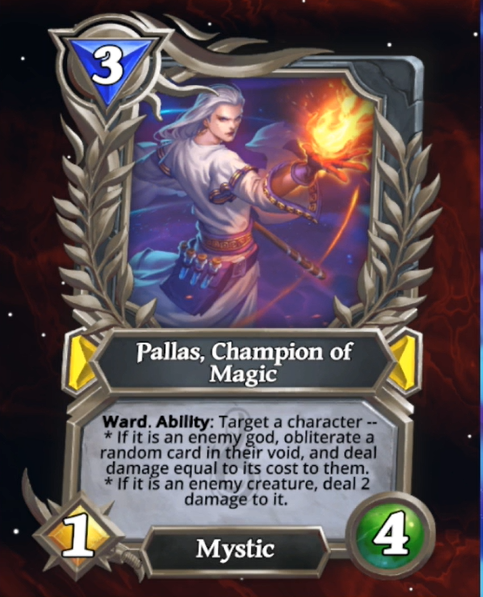 Hey guys, yesterday we had another reveal on Official Gods Unchained stream where we were shown the third champion, Pallas, Champion of Magic and couple of cards as well. On top of that, they finally showed us a glimpse of Favor mechanic which acts as some kind of in-game sideboard but we will get to that later. Let's first take a look at the champion and some of the new cards.

If you want to watch the VOD of the Official stream go here.

Also, the Chapter 4 of the lore came out.

Of course, as always, these cards are subject to change but that doesn't mean we can't analyze current states and find the implications or problems with those cards and see how to deal with that.

In contrast to the first two champion cards that were really impactful mid-sized creatures, this one seems like an early game type of card or a potential combo piece for some kind of weird scenario that interacts with your opponents void, but as you'll see there will be new cards that will be doing just that so void manipulation might be a thing in the new expansion. Other than that, doing 2 damage to an enemy creature is quiet alright but not something you would expect from the Champion card. Pallas isn't looking too impressive in comparison to already revealed champions but we might get support around it that will make more sense later. Just by itself, this is a 2 mana relic that can draw you a card the next turn which is of course less than mediocre but after playing 3 Magic cards you can draw one extra card and if you are able to get at least one extra draw out of this I think it's worth it. Now is this type of card going to find a place in the meta Magic decks? Currently, I don't really think so because it just ramps up too slow and since every god will get a legendary relic we will most likely see an increase in relic hate cards so get value out of this will be really hard to accomplish. Magic is getting a new board clear, even though Magic already has a lot of those, this one is limited as to what it can do but has an interesting function as well. Affecting only 6+ mana cost creatures this doesn't seem like the main reason one would choose to run this card in their list. The reason would be to counter void dependant archetypes, such as Reanimate Death or Olympians tribe synergies and cards like Born Again and Radiant Embalmer from Light, and it also counter a card that we will discuss in a moment. It can also be used to filter out early game cards from the void to get better results from the Pallas Roar effect but there will still be rats in the void after that so it doesn't guarantee anything.

Trial of the Underworld

Now, this is a late-game bomb drop! For 8 mana you could potentially summon 30 mana worth of creatures, which is crazy! Even summoning just a 6 and 7-drops it is more than worth it. This spell has huge potential and it will definitely see play in meta, probably as some type of finisher for Death decks that are trying to discard as many huge creatures as possible and since it pulls creatures from both voids there will be even more implications for running this spell aside from archetypal purposes. This is also the card that can be countered with Pallas' Incantation which is good since if Trial of the Underworld goes unchecked it would most certainly break the meta with that amount of power in a single card.

Form of Unity, Power, and Wisdom

Just to note, these are all individual cards but are revealed as a package and we will analyze them like that, it is obvious that they were meant to be used together in some kind of aggressive Magic archetype. We can see that they are all pretty cheap spells that might be a good support for Pallas' Wand.

Form of Unity... umm, I'd say in its current form the card is busted. For 3 mana to make this card worth it, you would need 2 creatures and anything else is excellent. With 3 creatures on the board, this makes Whyrmbreath look silly but that isn't all, the maximum damage goes to 12, which is simply absurd for only 3 mana even though this won't be so easily achieved it is possible and should be considered. To make it fair it should at least cost 4 mana and/or the spell should only be able to target creatures.

Form of Power goes well with Unity as it provides more aggressive tools to remove creatures and damage face. For 1 mana it essentially deals 4 damage but since it is split like that it feels fair. With this trend of Form of... cards, it is reasonable to assume that we will have some kind of aggro Magic type of deck that will be focused around spells so we might see an increase in the use of Spell Boost creatures as well.

Form of Wisdom compliments the package well. For 2 mana drawing a card is really that good but if you manage to pull a cheap spell it can be worth it. It recycles itself, potentially gives you 1 durability on Pallas' Wand and thins out your deck, everything you would like in a synergistic aggressive decklist. Aside from that, it can find its place in some kind of combo deck that needs more draw and uses a lot of cheaper spells.

Finally, we get to see how they imagined Favor. To explain this picture a bit. The Sanctum will be a button you can click on the right from the both players void and it will open a sideboard that will look something like this. Above and below the SANCTUM are numbers representing how much favor each player has. On the right of that, you can see some cards you can pull to your hand if you decide to spend your favor. There will always be 3 choices from 5 different decks of 12 cards that will be packed with similar cards (labeled as these, Win More, Board Clears, Tempo, etc.). Don't get confused by current labels as those were just placeholders to help casters explain it during the stream.

Favor is designed so that you can earn it while playing the game "normally", what I mean by that is the following.

Dealing damage to your opponent's face gives you favor, I'm guessing that you get favor for each point of damage but that wasn't fully explained.

Destroying the opponent's creatures also gives favor, I'm guessing that you get favor equal to the mana cost of the destroyed creature but that also wasn't fully explained. It is the impression I got from watching the presentation.

When you get enough favor you can spend it to get a card that you need or want to take from your opponent, because the sideboard is shared for both players and you have the same choices.

As I said, there are 5 different decks with 12 cards each game and you can only choose between 3 of those at the time. When you take a card from one deck, that spot will be blank until your opponent's next turn and the deck you took the card from will be replaced by one of the other 2 that weren't available.

These decks will have only Core cards with a possibility of having season 1 cards but Genesis cards won't be a part of it.

This is it for this batch of reveals. This time we had a lot to talk about. Pallas didn't impress too much but the reveal of the Favor mechanic definitely compensates it. Favor will bring more decision-making in the game and raise the skill-cap required to stay on the top of the game. That will be good refreshment for players looking for more challenge and bring back to game those that played a lot with genesis set and got bored with stale meta we currently have.

This time we didn't get the next teaser silhouette, maybe we get more than we expect?!

One more thing, a Game Designer on the stream said something about how they might borrow us cards from the season 1 set. That could be a hint of letting us test the cards to balance them. If that's the case, this is so exciting, can't wait to play them and make use of God's favors!