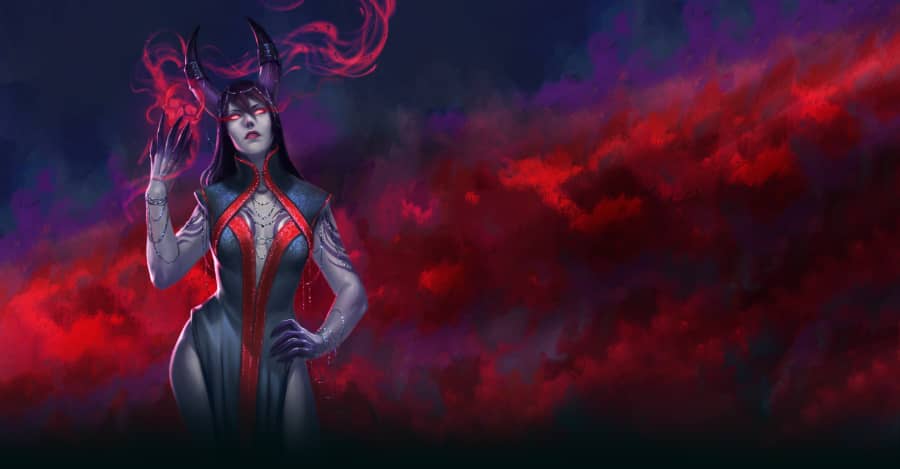 Another weekend event has ended and I wanted to analyze a bit a deck that I was playing over this weekend and had pretty good success with. I had a record of 47-17 (73.4%), not a lot of games but enough to get a general sense of how to play the deck and what are the strengths and weaknesses. Here is the list I used:

What I like about this deck is the ability to play around board clears, the almost "infinite" value and the potential for tempo swings. Of course, the deck shines because of Death's God Power, Reanimate. That is why the mana cost of creatures on the list needs to be specific to get the most out of the God Power.

Soul Jar is are number 1 card when it comes to generating value in this deck. This is possible because the Afterlife effect spawn 2/2 that have a mana cost of 2 and if we use our Reanimate God Power on one of those we can summon Soul Jar from the void and repeat this as much as we want. Also while having a board presence and a Soul Jar on the board as well if the opponent decides to use a board clear we will again have those 2/2s on the board and the cycle can continue.

Untold Greed is a powerful inclusion in a deck that revolves around Afterlife creatures. In most cases, this is a 1 mana draw two and pop a Soul Jar or Chicken Egg which also gives us some tempo. Not much else about it but it is a really important card in this list.

Millenium Matryoshka doesn't seem like a too strong of a card but the key components of it are mana costs. As a 4 mana card we can bring back Anputian Magus and Rockdrake from the void and with the Anim leftover from its Afterlife which is a 2 mana cost creature, we can once again bring Soul Jar or even Viking Bloodguard. Also, it helps in playing around board clears.

Anputian Magus is a great Backline value generator, a piece of our Rune synergies. It is easy to make Anputian safe because most of our creatures summon more creatures so if the opponent doesn't have a direct removal they will hardly ever reach it and if they somehow do, that will cost them generating us 3-4 runes at least. Even though its a part Rune synergy package it fits the deck so well it could be used on its own just for the value it brings.

Rune Smuggler is a strong card in general, plus it generates more runes, which is great. The Hidden ability makes it good for trading and then Reanimating for actually any other creature in the void that fits the situation which gives so much flexibility with the card that is usually just a straightforward 6-drop.

Ocular Fiend as we all know, the god of Rune archetype. Potentially big body with clear, I already recommended everyone to get their hand on 2 copies of this bad boy in my last post.

The biggest surprise on the list (at least for me) is Rockdrake Egg. It looks like a really risky card to run that won't activate as often and it is in aggro match-ups at least, but it actually performs really well versus value-oriented decks. Rune generation often fills the hand up enough to satisfy the 6 cards in hand requirement to activate the Rockdrakes Egg afterlife effect, Untold Greed is also a great tool to activate it because the drawing part of its effect triggers before destroying the egg and makes it easier to pull off. This card wins really slow opponents sometimes on its own.

Against aggressive decks, the early game can be a real struggle if we don't get the right tools. Blight Bombs are a must keep, I guess any 1 cost is a good keep but removal is quite necessary. Untold Greed is also a must keep because it enables a nice tempo swing with Soul Jar early on so that we can stay relevant with the board presence to fight of the aggression. Mana ramping 2 drops get us to the mid-game quicker, where we can start outpacing the aggressor.

Keep in hand: Blight Bomb, Untold Greed, Backstreet Bouncer, Expectant Chicken, keep Soul Jar (or Rockdrake Egg) only if you have something to pop it with (Untold Greed or Living Container)
Runed Asp and Fanatic of Khnum are bad to keep but like I already said it can be risky.

Against control decks, early game won't be an issue so its best to try and find as many cards that we can cycle with the God Power, such as Soul Jar, Trojan Golem, Viking Bloodguards because not only does that give us value but also enables us to play around board clears and most of the time forces opponents to use their cards inefficiently. The late-game plan is to get as many runes as possible in hand so that Ocular Fiend can become a finisher.

Keep in hand: Soul Jar, Trojan Golem, Viking Bloodguard, Rockdrake Egg, Untold Greed, Daemonic Offering. Keep Anputian Magus only if you have other solid cards already in your starting hand, it is a greedy move but more often than not is a card that you want to play on turn 5 to get runes fast.

The current price for this decklist is 0.346 ETH (around $60), with a couple of swaps its possible to shave off $15-$20 if you are on the budget. For example, Expectant chicken can be replaced with Card Shark and Daemon Offering can be replaced with Hunger Daemon or Void Flash to get a single target removal.

This is it for this deck review, I had a huge success with it, hope you will too. A nerf to the Rune of Life won't make much of a difference, probably Slayer War matchup will be a bit worse but that isn't a great match-up anyway so not much will change. I'll make a non-rune version of this deck in the future either way. Got some ideas on how that might work? Tell me in the comments below.

I need a new deck. I may try this. Just missing a few of the core cards. They will be harder to get.

Fortunately, there are no epics just a single legendary from the core set in the deck. Deuteria is pretty awesome as well, forgot to mention that in the post but if the game goes a bit longer and you draw a 6/6 version of her that becomes bonkers because you can reanimate any other creature into her because she is only 1 mana :D