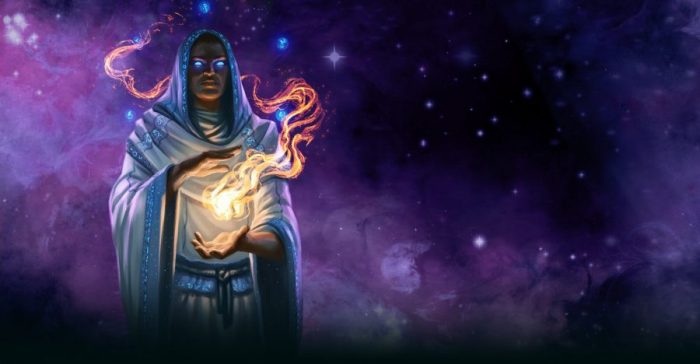 Hey, guys! There was no deck review last week cause I didn't have much time to play, this time it wasn't much different but I had a bit of fun with this silly list for today so I decided to share it. This list was made basically to test ramp cards in Magic and Foresee mechanic as much as possible while still having a decent win-rate on the ladder. Okay now, this is the list:

This time around I can't point out the core cards in the deck because what it really consists of is packages of cards that are focused heavily on doing a particular thing and every package needs most of these cards to make it work.

This package is pretty straight forward, Mana Toad is more or less a staple card in Magic decks and that also goes for Sip of Elixir.
Well of Power is not that popular of inclusion but since we need more ramp for this strategy it is a decent inclusion. It works really well (pun unintended xD) versus narrow boards with higher attack creatures because essentially it heals us for the lowest damage we should be dealt the next turn. Also, it's a cycle card which thins our deck a bit.

Guardian of the Gates is the most important one, not only because it ramps the mana but it also gives our god Ward which protects us from Deceptions Cutthroat and that's why we also use O Fortuna to protect our hand even more.

AoE, AoE and some AoE. It's the only form of removal we need because this deck is using Clear Mind god power, single big creatures don't pose a threat so we can lower its health with AoE while killing other stuff on the board as well and eventually get right of it. Demogorgons are also included because... well they are just too good, can't seem to make a slower deck without including them, clear, sleep, heal, everything control deck needs.

This is actually the reason I decided to test this list out. Foresee is an interesting mechanic that has the main function of making your deck more consistent and lower the chance of a bad draw. But actually when you have enough Foresee in the deck to use it all the time it becomes a cycle tool enabling you to "rig" the deck for later turns.

What I mean by that, let's say for example you use Foresee and you decide to put your Avatar of Magic on the bottom of the deck because it was too early. We can say that you put it in position 0. Every time you Foresee a card after that you will push Avatar closer to the top of the deck, for example, you Foresee another card, Avatar would now be in position -1, for next time -2 then -3, -4 and so on. Now if you have 15 cards left in the deck with Avatar in the position -5, it will be the 10th card in the deck. So as you move closer to the 9 mana you can use more Foresee cards to rapidly move Avatar to the top and get to it on the turn you plan to use it or reduce its cost to start comboing.

Coincidently all these cards are 1 mana so are good for a starting hand and enable you to start rigging your deck from turn 1.

Warp Engineer is a combo piece that ideally lowers the mana cost of Avatar of Magic which in combination with one spell reduced to 0 mana also can produce a 15/10 damage burst (with/without a bag of tricks), with second Warp Engineer this can be increased by another 10 damage, but most of the time it doesn't seem necessary.
I like Arcane Transcendent better even though it can only reduce the cost of spells, 3/3 body makes it easier to play against aggressive decks where we shouldn't focus on the combo but surviving aggression.
Echophon is here as another big threat for control match-ups that usually requires 2-3 cards to get removed and in most cases, it clears the opponent board which gives us more defense versus fast decks.

No matter the matchup, the goal is to keep at least one fortune-teller, because they are all 1 mana so its a good start nonetheless.

Against aggressive decks, we mostly aim to get cards from the Control Package, Inferno and Demogorgons are just too expensive for the start, but Astric Implosion can be almost like an insurance card so we more easily sacrifice tempo to ramp a bit faster because we know that on 6 mana we have a board wipe ready. Tracking Bolt and Starshard Bolt are always a keep and Arcane Transcendent can be used as a tempo card with 2 mana spells to fight for the board or reduce the cost of Well of Power so we can use it with a smaller tempo loss later.

Keep in hand: Tracking Bolt, Starshard Bolt, Arcane Transcendent, if you get Astric Implosion also keep Mana Toads and Guardian of the Gates.

Against control decks, we just need to ramp as quickly as possible so that we can start with our Finisher package while our opponent is still at 7 mana so that they don't have time to play threats like Helian Elite and such because we don't have solutions for creatures that big. Last week the most popular control deck was Deception and versus that particular one god, we need to find Guardian of the Gates and O Fortuna as fast as possible to protect our hand so that we don't lose our win condition to Cutthroat.

Keep in hand: any card from Ramp Package while second priority is the Foresee Package.

Probably you noticed that this list is missing one crucial card and of course, it's Frey, Archmage of Selene. Well sadly, I can't pull it from the Core packs and trading Core cards isn't possible yet.

Even after two nerfs to this card, reducing a mana cost of the drawn card to 2 instead of 1 and another nerf that came after but I couldn't find a high-resolution image of that is the Foresee going down from 6 to just 2.
If we use the same principle or rigging our deck with Foresee, we can almost guarantee that Frey will discount our Avatar of Magic and create easy OTK scenarios even if our opponent is at 30 Health. Anyone that has Frey in their collection and want to try out this type of deck, please share your experience I can guarantee you will have a really good time testing this one out.

This decklist costs around 0.735 ETH (around $95), one Demogorgon can be swapped for another Inferno and the second one can be swapped for Ashen Drake to shave off almost a third of the price of the whole list. Even though both of these replacements are also used to clear the board, you will lose the only Heal this deck has but it's definitely more affordable.

That's it for today's deck review, this time I didn't go for a competitive list but more for fun and experimentation. I think that this deck has a lot of potential in the future if we get introduced to other Foresee and Ramp options or more board clears in the form of creatures to get a bit more presence on the board and more stability in the midgame while preparing late-game finishers.

Special thanks to @cryptoznewb for lending me Avatar of Magic to try out this idea in the first place.