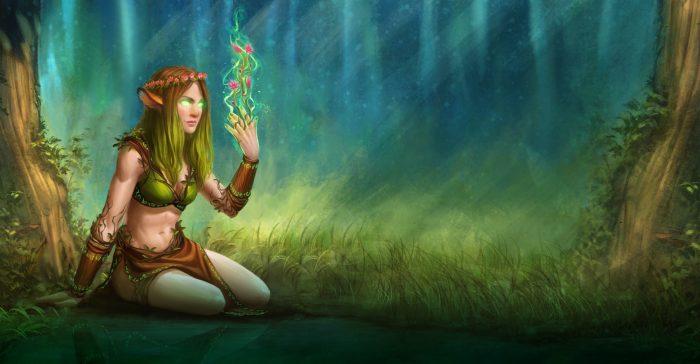 Another week, another deck review. This time I wanted to try out Nature. Ever since Natures god power Flourish got nerfed this god is the least played one. The last couple of weeks Nature has been receiving buffs to many different cards so I thought it is finally time to try and make it work again, but not in the old zoo fashion, rather in the control style deck. Yes, there are some Amazon decklists that seem to work but still, it feels too much dependant on certain draws like Arkonian Onlasught and Penthesilean Warrior to make it work so I didn't like that. Okay, let's take a look at this control list I came up with:

Before we take a look at the core cards of the deck I'd like to point out that Black Jaguar wouldn't really make this list but I didn't have Underbrush Boars to replace them so I had to compensate and it worked out well but not as good as Boars could easily do a better job removing threats from the board. Also, Valewarden Minotaur seems really decent since the buff, but I don't have them either so... yeah.

Arrow of Rage once a really awful card, with the latest rework, became probably the strongest removal for Nature. 1 mana for removal that actually Targets a creature, a great tempo, and removal tool. It works really well with big creatures because of the random damage it deals and it is easily manipulated. Great combo on 5 mana with Overgrown Rhino, developing a 5/5 and dealing 5 damage to a creature helps so much in taking over the board in the middle game.

Lightning Strike another buffed removal that used to cost 4 mana, now feels much stronger even tho its random, the creature it removes becomes less relevant because the spell itself is cheaper. 8 damage is more than enough to remove any creature that costs 7 mana or less.

Wildfire is not the strongest board clear but it serves well against aggressive decks. A random effect for surviving creatures is not as relevant although it can be a really nice bonus to give burn to 3 health creatures to potential kill those in the following turn. Since most of our creatures already have confused, hitting those with the effect sometimes doesn't give any downsides.

Revivification has an obvious role. Sustain versus aggressive decks and recycle in slower match-ups. Since its only a 1 mana spell, it can fit in many turns easily while still doing something relevant in both types of match-ups.

Demogorgon, just a broken card that feels like a core card in any controlling deck. Gives sustain, stops aggression and clears creatures. It is one of the best cards in genesis set and is a must for slower strategies. I can't stress enough how good this card is, especially because current options that counter the sleep mechanic are currently fairly weak.

Avatar of Nature, more sustain. Acts as a pseudo frontline because if left ignored it just keeps on giving you Walking Plants for even more sustain. Great stats with an upside, good for fighting for the board control and keeping you alive. 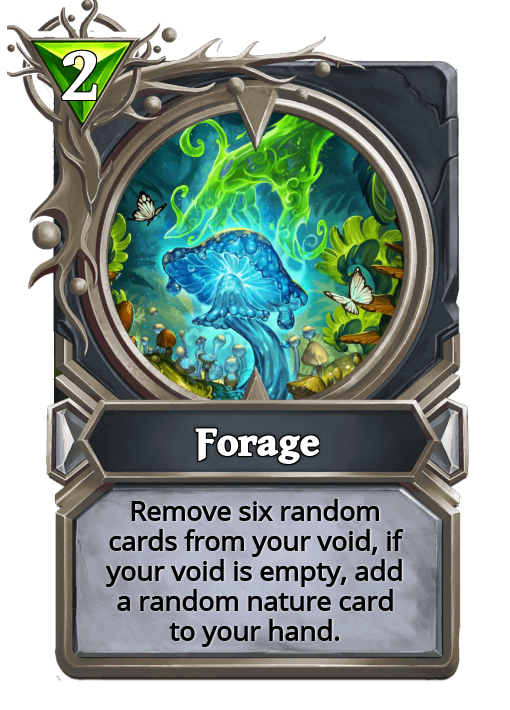 The purpose of this list is to fight off the aggression with sustain and removal, also there are a couple of big threats but that's not enough to challenge late-game decks and that's why we use god power Forage to give us more value which keeps us in the game for as long as we need. Of course, Forage gives random cards and sometimes those will be awful for the situation but if it gives us at least something useful, even just a random mid-sized creature that gets cleared with some of their removals we get a little bit of advantage over the opponent each time and that can sum up the longer the game goes. The god power gives us the most advantage versus decks like Rune Magic and Onslaught War because both of those decks are reactive and most of the time if there is nothing on the board they don't do much so using Forage to get a couple of cards in the early game, isn't that problematic.

Against aggressive decks we need all of the sustain and removal cards we can get. Revivification buys us more time which is what we need to get to big frontlines and eventually Demogorgon to shutdown any aggression left so its a must keep, any removal card is a keep, Vine Armour can be really powerful, even though it doesn't actually prevent us from taking damage it can serve as a removal that costs health which can then be replenished with so many sustain cards in the deck. There is not much else, survive to turn 6-7 and that's most of the time enough.

Keep in hand: Revivification, Compost Charm, Arrow of Rage, Pyramid Warden, Vine Armour, Wildfire, The Hunt can be a good keep but it's risky if we don't have a decent hand already. (As I said earlier if we replace Black Jaguar with Underbrush Board, we have and extra nice keep versus aggression)

Against control decks just go for single target removals and midrange creatures. Our early game doesn't need to be as good because we can easily compensate that with Forage but having Arrow of Rage and Lightning Strike can come in handy if the opponent plays something that we really need to remove. Other than that its good to have Overgrown Rhino and Agrodor Protector to keep them busy while we get more value from our god power.

Keep in hand: Arrow of Rage, Lightning Strike, Managarmr, Moon Hound, Agrodor Protector, Overgrown Rhino, Canopy Barrage. (In this case, I like having Black Jaguar for a more resilient early game creature but the Boar can also be as good)

The current price for this decklist is 0.548 ETH (around $82) largely due to the high price of Demogorgons. It's possible to shave off $30 if you replace Demos with Ashen Drake which can do a similar thing clearing the board a bit better but without providing additional sustain.

That's it for yet another deck review. I think that Nature got quite a bit more competitive, we can see that with the increased popularity in the Mythic rank. With the latest buff to Cryodyne Trident, a relic card from the Etherbot set that got its mana cost reduced by 1 and additionally now it has Blitz which easily can replace Vine Armour and make this list even stronger.

You didn't tell me you started posting again man! Love it! Great article.

Yeah, should've let you know. Thanks again for introducing me to this wonderful game, man! :D

Hey @z3ll, here is a little bit of BEER from @isnochys for you. Enjoy it!