Hey guys, today we have the fourth edition of custom Gods Unchained cards. As always, cards were created using this simple card generator. Today's artwork is made by two artists, Irenbee and Sandara if you want to see more of their work follow them on Devianart.com at Irenbee and Sandara.

The fourth edition will be about another currently unused tag, Dragon. Dragons currently don't have any special synergies or type of strategies expect there are a couple of them using the trigger requirement of holding enough cards in hand to activate, like Rockdragon Egg and Quicksilver Dragon so I'm going to expand a little on that too. Dragons are primarily Neutral creatures with some exceptions and this is the case here also.

This isn't supposed to be a set of cards that work together but individual cards that show what direction Dragon tribe could take in God's Unchained future expansions. Okay, let's take a look at some of these cards.

For starters, let's start with this Magic Dragon that would similarly to Circe be used as a board clear in the form of a creature but has the same scaling as spells because the damage would be increased with Spell Boost effects. 6 mana 7/4 body seems fair here as it is made to create pressure after clearing the board (potentially) but with on 4 health, it is easily removed in the following turn by the opponent. Spell Boost creatures currently aren't used that much so expanding this keyword in more areas should give it more usability and bring more variety to the meta. Next up we have a bit of synergy for the tribe itself mixed with a mechanic I already mentioned that is currently tied to the Dragon tribe and that's the "if you have six cards or more in hand" trigger for their abilities. This requirement is a bit harder to fulfill because, well... you have to play cards in order to win/not lose so the reward should be a bit higher than with usual synergy. So if you play a Dragon heavy deck giving this buff to like 2-3 creatures is actually insane but because you had to play it slow and acquire at least six cards in hand it is something that will take time to even out your board presence and tempo advantage. 5 mana 5/5 is maybe a bit too good of a body for this effect but in most cases that is all it will be so making it smaller might be too big of a risk for running this type of card in the deck. 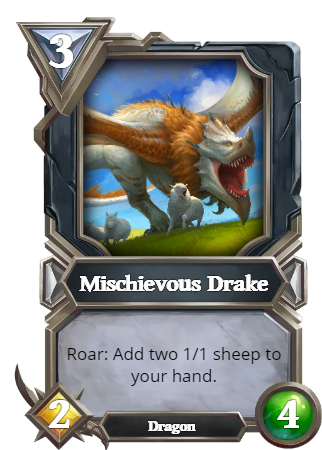 This one is a simple example of how Dragon synergies could work. 3 mana 2/4 is obviously an under stated body and the effect doesn't seem too powerful. But if our plan is to reach card in hand requirements for other more powerful effects, it could be worth it in the long run. If tribe synergies can be indirect as opposed to "if you have Amazon, Nether, Aether, etc. the do this", the creation of synergies can be more creative and open-ended which gives more freedom of expression and experimental ideas to try out, both for card designers and players. Let's get back to the plain old tribe synergy and in this case, an infinite value type of card. When I was thinking about this mechanic I didn't go too much into the balancing because it was too hard to imagine how could this work in Death so I made it more for the thematic feel of it. A creature constantly resurrecting from your void is what Death god does the best. A 5 mana 4/4 body can easily become too much for the recursive effect like this so it being a legendary card would solve this a bit because you could have only 1 in your deck and adding "Whenever an OTHER friendly Dragon dies" would disable potential infinite loop with two of those Dragons. Anyway, it would be nice to see a more powerful version of "Enduring Lemure" that would actually see play and apparently we will get this in the form of Neferu, Champion of Death and I can't wait to see it in action. A simple but tricky creature to deal with. Really bad versus aggression but can excel quite well versus slow controlling opponents. For 3 mana being only a 1/1 doesn't do much in terms of pressure but definitely has the potential to stop your opponent from developing meaningful board presence. Ward is just icing on this one cause it makes it really difficult to remove with spells or used against you with spells like Umber Arrow. With that said, it looks like Ward would be just too much on this card so maybe 4 mana is more suitable for this to be fair but is it something you would choose to have in your deck in the real meta environment? This Roar is very powerful indeed but is broken though? A 6 mana for a 4/4 body that doesn't have effects like Frontline, Protected or anything is really punishing if you don't have the Roar upside. Having six cards in the later stages of the game is really difficult unless you are playing decks that focus on generating cards like Runes. But then you have the problem of fitting this card in weaken that plan to get the advantage of this card, which makes bigger deckbuilding decisions come into play. The power of this card depends on Dragon card pool in the game and with the current pool it is a bit too much but as we get more mid-sized dragons, the average power of this effect would flatten out a bit with some edge-cases where you can get lucky in exchange for the risk you are taking with having a 6 mana 4/4 in your deck. A bit more rewarding than last one, or more precisely less punishing if you aren't able to fulfill the Roar requirement. In a sense, it is a stronger version of Agrodor Protector if you pass a couple of turns in the early game or play with Forage to fill your hand more easily but then again a 4 mana 3/6 is so bad to play either so it gives it enough balance to be considered as a potential option in a variety of Nature decklists.

Roar: Give Burn +6 to all enemy creatures. During your opponent's next turn whenever they summon a creature, give that creature Burn +3.

The idea behind this one is to cripple your opponent's next turn while creating a pseudo-frontline for all the creatures that just got burned for 6. A 7/8 body is enough to create a lot of pressure so the opponent's best course of action would to answer Shakar with removal, if they don't have one, it will be hard to contest him with creatures on the next turn. This works especially well with Deception as sleep effects go nice together with burn, but also Magic can have a nice follow-up with AoE for creatures already burned for 3 after they have been played. Even though Shakar doesn't do anything concrete the turn he's played, the pressure is felt immediately, this kind of effect would be an interesting one to have in the game.

This is it for today's custom cards edition. Dragons are really scarce in the current Gods Unchained card pool, hope this changes in the upcoming expansion. Also, I would like to see where this tag goes in terms of synergies and specific types of effects such as "six cards or more in hand" requirement roars.

As a little bonus, the first to answer which artist made the artwork for Nightscale Explorer gets 3 STEEM.