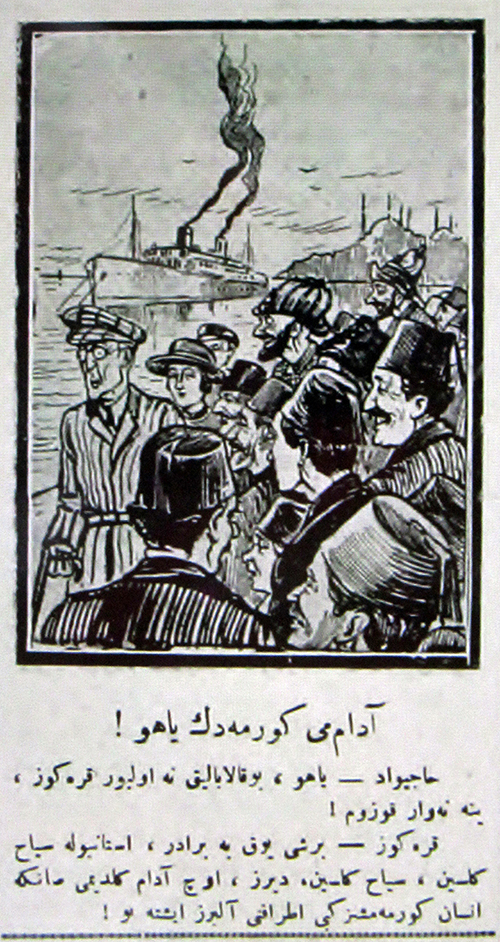 English
Have We Never Seen a Person!
Hacivat: What’s going on with this crowd Karagöz, what’s the matter now my dear fellow!
Karagöz: It’s nothing, brother. We keep saying that travelers should come to Istanbul, yet as soon as a few people arrive we surround them like we’ve never seen a person before, that’s all!

Comments:
The bi-weekly satirical journal, Karagöz was also a self-proclaimed “people’s gazette” (halk gazetesi) and as such, often featured edifying commentary or cautionary tales for its readers. Such content could also be described as “public service announcements” that could also cross into the satirical, if necessary. Today’s quip consists of both text and image and is located on the magazine’s back page where small informative illustrations like this one are usually placed. The text is a dialogue between the journal’s namesake character, Karagöz and his companion, Hacivat. The two figures are permanent features of the journal’s nameplate and more often than not, included in the publication’s cartoons. They are located in the present illustration’s crowd of people. They are identifiable by their flashy hats and beards. Gathered at a pier, the crowd has, apparently, amassed for the purpose of viewing the arrival of new tourists into the city. A nearby ship docked at the port signifies the long distance traveled. The tourists and the locals are readily discernable from one another based on their headgear as all of the Turks are wearing fezzes. The touristic motivations of the newly arrived travelers is echoed in the imagery where the familiar silhouette of the historical peninsula, peppered with an assortment of minarets and domes, appears in the background.

The journal Karagöz is published in Istanbul and as such many of its stories and imagery are centered around the city, its characters, quirks, events, and idiosyncrasies. A major tourist destination, Istanbul has been welcoming travelers to her coasts for centuries and similarly, tourism and tourists are a recurring subject covered in Karagöz. The text elaborates on the imagery when Hacivat asks Karagöz for the source of the commotion. Karagöz responds with disapproval, accusing his fellow countrymen of inappropriately gawking at foreigners and, presumably, making them uncomfortable. In this way, the snippet functions to caution readers against excessive staring, especially at travelers. Usually texts like this are accompanied by a moralizing statement about modernity or behaving in a civilized fashion, but this is lacking here. Nevertheless, it seems to me that the point of this public “shaming” is to communicate to people that they should act normal (or in common parlance, “be cool”) when they encounter foreigners and newcomers.

Much has been made of the Orientalist and modern tourist gaze that objectifies the world and regards it as a global buffet of exotic people and places to consume. Here, however, we are reminded of the locals and the dual-directionality of this gaze. By this account, here the spectacle-seekers (i.e. tourists) are transformed into the spectacle with the simple act of turning the focus on the local, counter-gander.