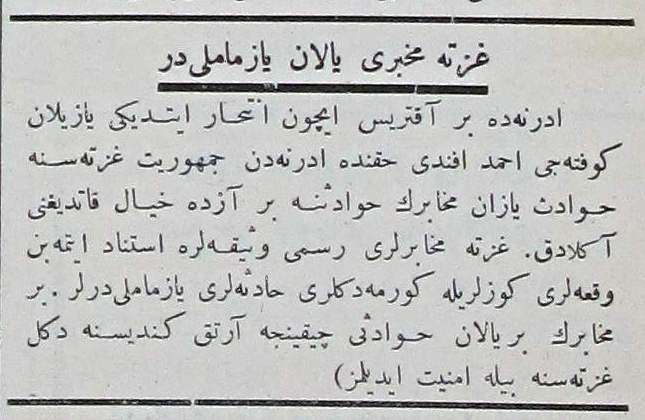 EnglishA Newspaper RReporter Should ot Write Lies
We understand that a reporter from Edirne writing news for the newspaper “The Republic” added a bit of imagination into his story written about the lyricist, Ahmed Efendi who committed suicide for an actress in Edirne. Newspaper reporters should not write about events that they have not seen with their (own) eyes (or) that do not rely on official documents. Once false news comes from a journalist, neither he nor his newspaper can carry (any) significance.

Comments:
Content about journalism and the publishing business always iinterests me. Thesnippet offers a rather vague account of a “misinformed” news story that was embellished by its reporter and then printed by a prominent newspaper, Cumhuriyet (The Republic). The brief summary of the event is followed by a scolding which functions to dissuade (through shaming) other potential offenders from committing similar acts of dishonesty. As far as journalistic integrity is concerned, both the reporter and newspaper bear the responsibility for spreading factually incorrect information. This note draws our attention to the importance of reliability, trust, and reputation—all of which can be damaged, permanently, with such acts of carelessness. Indeed, since there are various rivalries and other industry dynamics between publishing houses and their respective news organs, the Turkish press is keen on airing this kind of dirty laundry and keeping each other honest and upholding journalistic standards, within certain parameters.