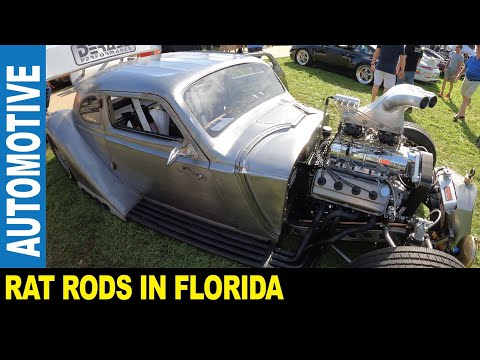 The modern definition of a rat rod is a custom car with a deliberately worn-down, unfinished appearance, typically lacking paint, showing rust, and made from cheap or cast-off parts. These parts can include non-automotive items that have been repurposed, such as using a rifle as a gear shifter, wrenches as door handles, and old saws as sun visors. A rat rod may or may not have extraneous decorations, but will always exude a great deal of personality due to the imagination required of the builder.

An alternate, and outdated, definition of a "rat rod" is a style of hot rod or custom car that, in most cases, imitates (or exaggerates) the early hot rods of the 1940s, 1950s, and early-1960s. The style is not to be confused with the somewhat closely related "traditional" hot rod, which is an accurate re-creation or period-correct restoration of a hot rod from the same era.

Originally, rat rods were a counter-reaction to the high-priced "customs" and typical hot rods, many of which were seldom driven and served only a decorative purpose. The rat rod's inception signified a throwback to the hot rods of the earlier days of hot-rod culture—built according to the owner's abilities and with the intention of being driven. Rat rods are meant to loosely imitate, in both form and function, the "traditional" hot rods of the era. Biker, greaser, rockabilly, psychobilly, and punk sub-cultures are often cited as influences that shaped rat rodding.

The typical rat rod is a late-1920s through to late-1950s coupe or roadster, but sometimes a truck or sedan. Many early (pre-World War II) vehicles were not built with fenders, hoods, running boards, and bumpers. The bodies are frequently channeled over the frame and sectioned, or the roofs are chopped, for a lower profile. Later-era post-war vehicles were rarely constructed without fenders and were often customized in the fashion of kustoms, leadsleds, and lowriders; Maltese crosses, skulls, and other accessories were often added. The owner of the vehicle was typically responsible for most, or all, of the work present in the vehicle.

Good morning, dear friends! Thank you for the interesting article, but I can say that I recently read a very interesting review toyota sienna! I was just choosing a car for myself and I could not imagine anything better than this option! I think you will really like it too because it is very family friendly.