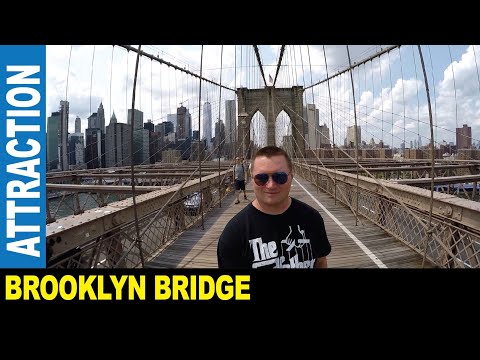 The Brooklyn Bridge is a hybrid cable-stayed/suspension bridge in New York City. It connects the boroughs of Manhattan and Brooklyn, spanning the East River. The Brooklyn Bridge has a main span of 1,595.5 feet (486.3 m) and a height of 133 ft (40.5 m) above Mean High Water. It is one of the oldest roadway bridges in the United States and was the world's first steel-wire suspension bridge, as well as the first fixed crossing across the East River.

The Brooklyn Bridge started construction in 1869 and was completed fourteen years later in 1883. It was originally called the New York and Brooklyn Bridge and the East River Bridge, but it was later dubbed the Brooklyn Bridge. However, it was not named as such until the city government passed a law to that extent in 1915. Over the years, the Brooklyn Bridge has undergone several reconfigurations; it formerly carried horse-drawn vehicles and elevated railway lines, but now carries vehicular, pedestrian, and bicycle traffic. Commercial vehicles are banned from the bridge.

I am the owner of the video