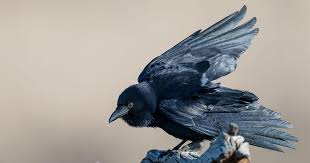 In a small Cornish seaside town in early December, wounded war veteran Nat Hocken is working part-time for a farm owner when he notices a large number of birds behaving strangely along the peninsula where his family lives. He attributes this to a recent cold snap and the sudden arrival of winter. That night, Nat hears a tapping on his bedroom window and encounters a bird that pecks his hand, causing him to bleed. As the night progresses he encounters more birds, especially those flocking into his children's room, but the birds leave at dawn. Nat reassures his wife that they were restless because of a sudden change in the weather.

The next day, Nat tells his fellow workers about the night's events, but they give his story no credence. As Nat later walks to the beach to dispose of dead birds, he notices what appear to be whitecaps on the sea, but it is actually a great line of seagulls waiting for the tide to rise. When Nat arrives home, his concerns about the aggressive behaviour of the birds are confirmed by a radio report saying that birds are massing all over Britain and some people have been attacked, presumably because of the unnatural weather. When Nat notices more birds, including the gulls, above the sea waiting for the tide he decides to board up the windows and chimneys of his house as a precaution.
Nat rushes to pick up his daughter, Jill, from the school bus stop to keep her safe. On his way back he spots his boss, Mr Trigg, who has a car, and persuades him to give Jill a lift home. Mr Trigg cheerfully professes to be unfazed by the announcements and plans on shooting at the birds for fun. He invites Nat to come along, but Nat rejects the offer and continues home, believing that hunting them would be futile. Just before he reaches home, the gulls descend and attack. Luckily, Nat manages to reach the cottage door with only minor injuries.
Soon, massive flocks of birds attack. A national emergency is declared on BBC Radio , and people are told not to leave their homes. Then, due to the "unprecedented nature of the emergency," the BBC announces that it is going silent for the night and will resume broadcasting the next morning. For safety, Nat brings the family into the kitchen for the night. During their dinner they hear what sounds like aeroplanes overhead, followed by the sound of the planes crashing. The attacks from the birds die down, and Nat theorises that the birds will only attack at high tide.
The next morning, wireless broadcasts do not resume and the radio is silent. The tide recedes, and Nat sets out to obtain supplies from his neighbours. He finds piles of dead birds around the houses; those still alive peer at him from afar. Nat walks to the farm where he is employed, only to find Mr Trigg, his wife and their workman dead. Later he finds the postman's body by the road; soon he comes to the realisation that his neighbours have all been killed by the birds. Nat returns home with the supplies but soon the birds attack once again. As if facing a firing squad , Nat smokes his last cigarette, then throws the empty pack into the fire and watches it burn.

Thank you all I hope you enjoy reading my article.

Disturbing situation is lived by the strange aggressiveness of the birds, where Nat is hit after wanting to look for provisions for his family.

Thanks for your entry to the contest.