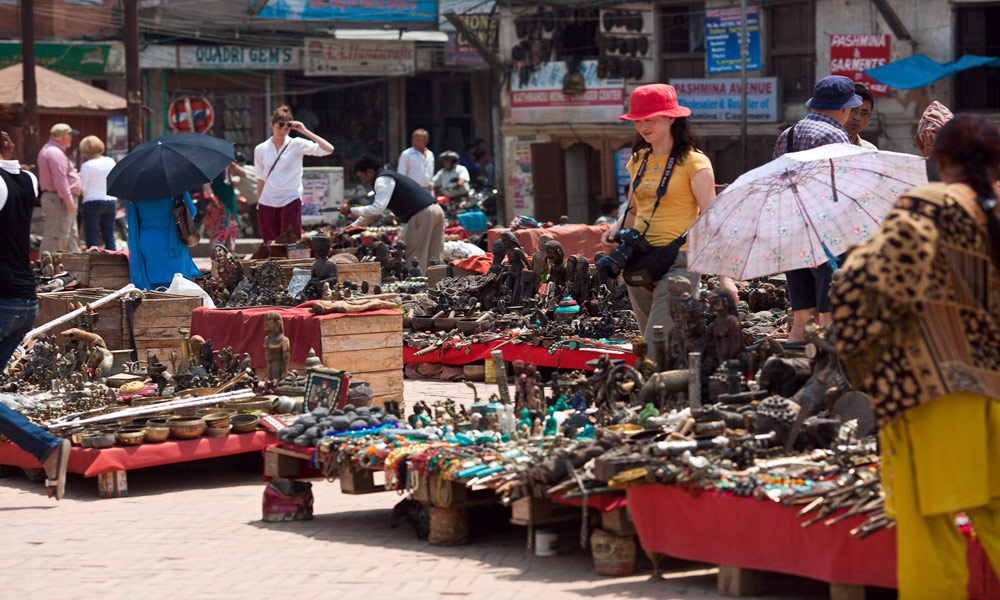 For most, visitors traveling Nepal, Kathmandu is the start point of their Nepal journey. Kathmandu is the largest city in the country and the main business center of the country. At places, this amazing city seems like a medieval capsule where in some places it is just another developing capital rushing into the modern era with concrete jungles and traffic pollution.

A day Kathmandu tour can be quite an experience.

Starting early from the hotel for Kathmandu tour, expect the sights, sounds and smell sensory overload. However, after an hour you’ll get used to it.

Kathmandu Durbar Square
This marvelous Durbar square is the number one tourist visit site in Kathmandu. It is a place where the king’s were crowned and legitimized. As now there is no glorious coronation, this place makes a good exploration site for the local and tourists. However, the tourist will have to pay an entrance fee to get into this site.

Many loosely connected squares makes up Durbar Square. To ellaborate, to the south is a Basantapur Square area. Consequently, the main Durbar Square is to the west, The other portion towards northeast consists the Hanuman Dhoka ” gets its name from the stone image of Hanuman, the Hindu deity ” and an assortment temple. From here, at one time the main road in Kathmandu Makhan Tole is still the most interesting streets to walk down.

Rebuilt over the generations, most of the monuments you see here dates back from the 17th and 18th century. It’s easy to spend hours strolling around the often crowded Durbar Square and adjoining Basantapur Square. Further, this is the focal point of the town, where you can order a glass of tea and watch the world go by.

Glimpse of Living Goddesses ” Kumari”
One of the beautiful three- storey courtyard with intricately carved windows, with its door guarded by stone lions inside Durbar Square, known as Kumari Bahal lives a young girl (the Kumari) selected to be town’s living goddesses.

She remains Kumari until she reaches puberty and reverts to being a mere mortal. The Kumari generally shows her face between 9am and 11am. However, you cannot photograph the goddess, but you are quite free to photograph the courtyard when she is not present. Furthermore, the beautiful courtyard contains a miniature Stupa carrying the symbols of Saraswati, the goddesses of learning.

Swayambhunath Stupa
After visiting the beautiful courtyard, drive to one of the most popular and instantly recognizable symbols of Nepal, the Buddhist temple of Swoyambhunath. Amid the sightseeing spot during your Kathmandu tour this site is a must visit. The temple is also popularly known as the ” Monkey Temple”, after the large tribe of handsome macaque that guards the hill.

Laying on a hillock 3 km west of Kathmandu, Swayambhunath is one of the holiest Buddhist stupas in Nepal. It is said to have advanced unexpectedly when the valley was made out of a primordial lake over 2,000 years back. This Buddhist Stupa is the oldest of its sort in Nepal and has various sanctuaries and cloisters on its premises.

From its hill top setting, Swoyambhunath offers fine views of Kathmandu valley. Moreover, it is particularly striking in the early evening when the city gets illuminated, further, the slight glow of moonlight supplements the attractiveness of the city.

Garden Of Dreams
Now, It is already afternoon and you must be getting hungry, why not take a break from a tour and have your lunch at the beautiful Garden of Dreams.

The Garden of Dreams, a neo traditional historical garden, located amidst Kathmandu city, Nepal. The Garden’s structure shares much for all intents and purpose with formal European gardens: cleared border ways, punctuated by structures, trellises, and different planting territories, encompassed by an indented blossom garden with a huge lake at its middle. Moreover, it is a structural scene that urges the guest to walk around and find the Garden’s fortunes from a wide range of vantage focuses.

Lovely garden, serene after stepping in, the commotion and contamination of the traffic outside shut away. Decent walk around delightfully kept grounds and staff keeping up the garden. In addition, Kaiser Cafe offers delightful perspectives on the garden, is very expensive, yet staff are thoughtful and the food is good. Great to spend an hour or two here.

Alongside, a long, narrow alley, craftsman weave fabric and etch timber, squares loaded up with drying pots, and local people assemble in patios to wash, gather water, play a card game and mingle. To begin with, to see this woven artwork of Nepali life, tourist have to pay an entrance fee, which helps to fund the square maintenance.

Furthermore, the cobblestone street links the arrays of temples, monastery courtyards and monumental squares. The lack of traffic inside the Square makes it easy to walk and take photographs.

As a matter of fact,the most of the monuments in the Durbar Square dates from the end of the 17th century.

Moreover, this town is a curving road, which links many of the squares and you should not miss all this effortless blending of the modern and medieval.

This is one of the extraordinary opportunity to taste basic Nepali food called “Dal Baht”. It is basically rice with lentils and various curries. Furthermore, enjoy the assortments of Nepalese dishes that will keep coming. The server with a sensitive grin on their face will name you everything in Nepali similar as in English language before serving you. At the same time, you will be kept drawn in by a cultural show presentation by various ethical gatherings of Nepal.

Finally, after enjoying the show, you will be transferred back to your hotel.