How investors are looking at the cryptocurrency space in 2021 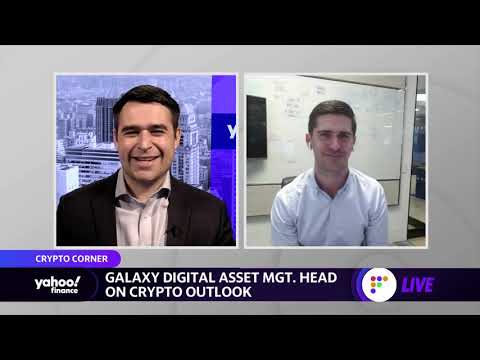 ZACK GUZMAN: Well, as legendary investor John Templeton said, the four most expensive words in investing are this time is different. But when you look at the crypto world, it actually might be this time around. And that's the focus of today's crypto corner here on Yahoo Finance, trademark pending.

When you look at what Coinbase filed in their S-1 last week, you can see the surge in institutional interest in terms of trading volume there, rising for the last three years $120 billion in the institutional volumes that Coinbase reported versus the $73 billion on the retail side-- very different than what we saw last time.

Bitcoin hit its prior all-time high around $20,000 a coin, now up well beyond that. You have a lot of people talking about could this be another bubble, but that data would seem to indicate otherwise. And for more on that, I want to bring on our guest in today's crypto corner. That would be our next guest here.

Galaxy Digital Asset Management head Steve Kurz joins us now. Steve, good to be chatting with you today. And I suppose you'd be the perfect guy to talk to you about institutional interest. But what have you seen maybe relative to what we saw in 2017 in the way that investors now are looking at the crypto space?

STEVE KURZ: Yeah, and thanks so much for having me today. It really is night and day. We put out a piece in December. That was why this all-time high is different, and that was back in 20,000, which seems like a long time ago for Bitcoin. And we really identified a few different trends that really led us to feel that this is just the beginning of a new phase of a secular bull market. It's a less retail-driven market. It's a healthier underlying liquidity and spot volume dynamic.

The regulatory environment has improved dramatically. The service provider quality has improved dramatically. And you really do have this unprecedented macro backdrop alongside an adoption story. So you just have so many things working in tandem that are taking down barriers that existed in 2017, that it's almost inevitable that you're going to have more players come into the space for those reasons collectively.

ZACK GUZMAN: Yeah, and since then, we have seen two ETFs in Canada for Bitcoin launch. But it's not just Bitcoin, too. The other thing that caught my eye in the Coinbase filing was also kind of the surge in alt coins, Ether, but also, a pretty considerable chunk of their trading volume came from other crypto assets. And Bitcoin actually fell in terms of relative percentage.

So when you look at that, maybe what's the interest look like now? Because Mike Novogratz, your founder at Galaxy Digital, had talked about Bitcoin kind of being this gateway drug that gets people interested in crypto, and then inevitably, they surged past it. So what are you seeing there?

STEVE KURZ: Yeah, yeah, it's a great point. And the numbers are supporting it. Look, our mission in the asset management business here has been to make crypto an asset class. And Bitcoin has been the first lane of that asset class. And so, in many ways, you're seeing the same playbook that made Bitcoin an institutional asset, which it very clearly is today, playing out with ETH. Right, in the last month, we had CME futures for ETH. You have new products and services coming to market for ETH. We launched Ethereum Funds with NZ Funds as an anchor in New Zealand and Vision Hill.

So you have institutional investors supporting those fund launches. You have service providers supporting those fund launches. And you're starting to see the volume follow and the interest follow, even with things like Bloomberg, right? Bloomberg's been a big entrant into the space from an index perspective. We have a family of indices with Bloomberg, and we recently stood up a Bloomberg Galaxy Ethereum index.

So all of these things aren't as sexy as talking about the price going higher. But that's really the foundation that's starting to move from Bitcoin into ETH. And I suspect you'll see that starting to happen for DeFi as well. And those are prerequisites, the big dollars coming into those other parts of the crypto asset class.

ZACK GUZMAN: Well, let's get into that sexier part of where the price goes here then because that is one interesting piece of how you guys build out funds, right? I mean, Ether's not the largest part. You've put most of it into Bitcoin, as it's kind of steadied here and risen. And volatility has come down quite a bit, at least for now.

But how do you look at maybe where Ether and some of those alts go and the right way to look at investing in those, too? Because we have heard some price targets. Fundstrat has theirs north of $10,000 for ETH. So I mean, how do you look at that, and where does that space go?

STEVE KURZ: Well, it's early days. And the price is as exciting, as you say. And I think it's a spectrum. You know, if you would compare it to a venture analog, you would say you're at the seed stage, maybe thinking about a Series A stage when you're talking about DeFi. You're probably in a Series B or growth equity stage for Ethereum. And then Bitcoin's a real asset.

And so the price has a lot more room to run. The volatility is going to be much higher. But I think those targets, while they sound crazy, if you think about what has happened with something like ETH in the last year, instead of in 2017, when it was all about ICOs as a use case, you have DeFi on top of ETH. You have non-fungible tokens on top of ETH. You have stable coins that are part of the ecosystem.

So there are real reasons for Ethereum to exist. The network statistics are increasingly impressive from a volume perspective, locked value-- all of these really strong signals about that network. And of course, the promise for ETH is so big and heady, right, the future of the internet, right, a better decentralized internet, that I don't think anyone would find multiples of capital return on the current price as crazy.

And we're seeing that play out with institutional investors asking about ETH and where it fits in a portfolio. That's a very interesting but early story. And so it's so early that you can get excited about just the dollars that would come in to drive the price much higher.

ZACK GUZMAN: Yeah, I think you just hit on what, to me, is the most impressive and interesting piece of all this, too, when you think about trying to value some of these things. In Bitcoin, we saw this kind of shift over as institutional investors talk about it replacing digital gold. ETH you can look at decentralized applications, how much is being built there, and transactions on that chain as showing growth.

When you look at some of these other more interesting and newer projects, NFTs catching a lot of interest right now for what they're doing in the art space. I don't know. I mean, if you think about total addressable market, you can say, all right, if decentralized apps are going to replace the financial world, ETH has promise, and some of these other crypto projects have promise. NFTs in the art space, though, I'd be curious if you're starting to hear from institutional investors about them and say, look, what's going on over there if these things are completely exploding right now or if it's just too far out of the ordinary for family offices or some of that real institutional capital to start chasing.

STEVE KURZ: Well, look, to be intellectually honest, you have to think about the state of the world and where liquidity is in the world and what that means for liquidity flowing in different pockets. So I certainly don't think the NFT space or the DeFi space will be a straight line. And so you have to be rational, you have to size it appropriately.

But if you think about what an NFT is or represents, it really hits on the fundamental piece of blockchain technology. And that comes from Bitcoin, but it extends all the way through to NFTs, and that's digital scarcity, right? People will always have a bid for something that's cool or different or scarce. And that was never possible in a digital sense until you had blockchain technology really integrate with some of these projects.

So the promise of that is huge. It's the same thing as Picasso. And I would expect that to be a really important source of value and an area that's going to grow dramatically, but it's not going to be a straight line. We haven't yet laid down the rules of the road in an NFT or a DeFi space. And so that's a little bit more interesting for institutional investors taking a look. We have some Bitcoin exposure. Teach us about that, and maybe we'll be putting our money to work over the next one to two years, instead of the next one or two quarters there.

ZACK GUZMAN: Yeah, I'd agree. Very early days, but always interesting to see art pieces purchased for 60 grand and sold later for 6.6 million in just a matter of months. Crazy times in the crypto space. But Steve Kurz, Galaxy Digital Asset Management head, appreciate you taking the time here to chat with us today. Be well.