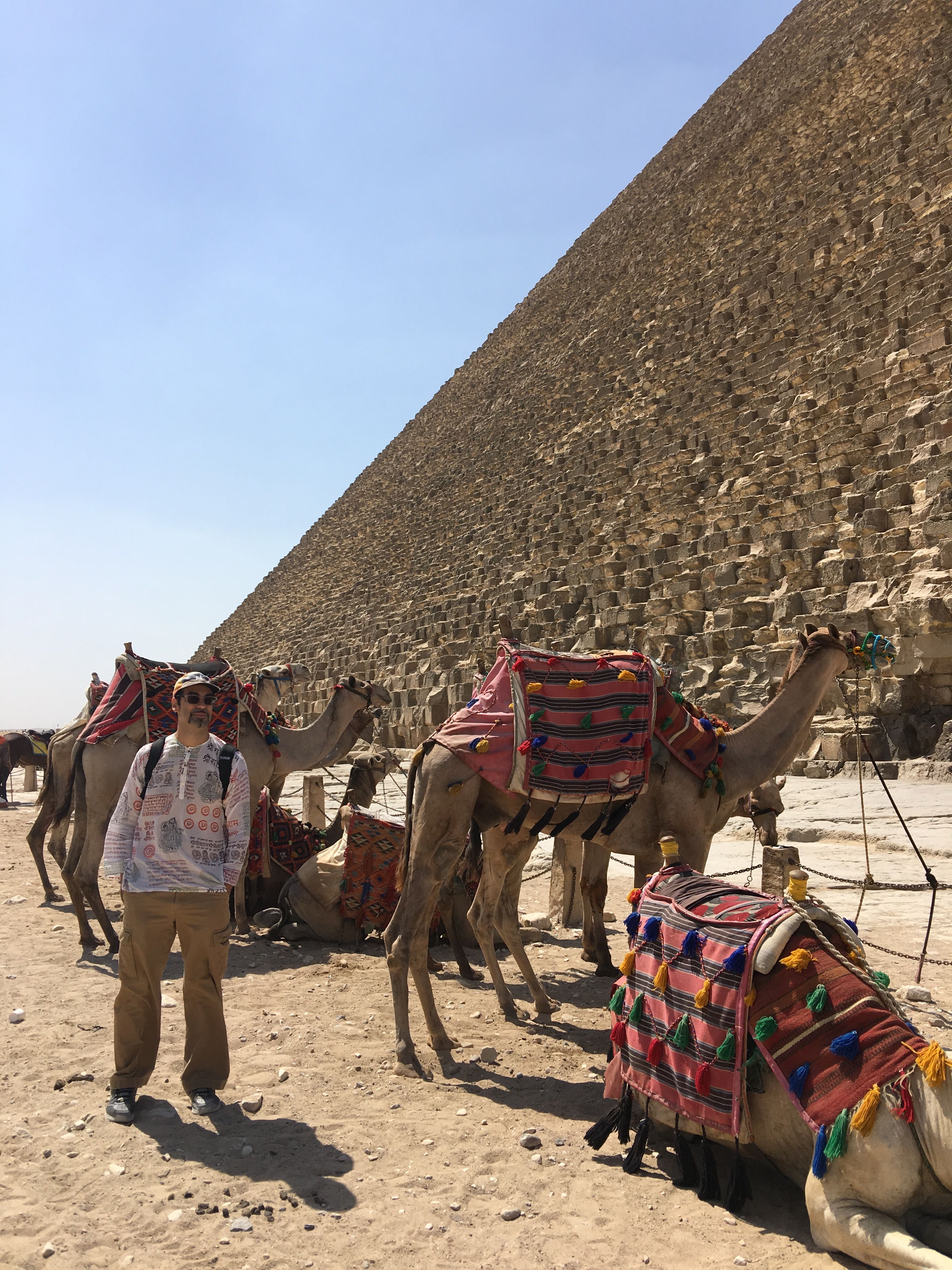 Egypt, as I understand it, is a joyous child whose confidence has been shaken by repeated scolding and attempts at molding. We’re not quite ourselves at the moment, and appear to be battling for our souls. To find ourselves between a rock (the military) and a hard place (Muslim Brotherhood) is not really a healthy mental space. But, I tell myself, we’re just experiencing a mauvais quart d'heure—our unfortunate present moment does not define us; it’s just a hiccup caused by indigestion, viewed in the context of our long illustrious history. And I hear echoes of our fabled wisdom and indomitable spirit in this noble slogan of ours that circulated following our revolution: اليأس خيانة والامل أمانة (“Despair is betrayal, and Hope a responsibility”).

The dashed hopes of 2011’s heroic people’s uprising . . . After witnessing millions of desperate Egyptians dare to care and put their lives on the line to create a new world, and then for this heroic, historic mood to begin to curdle—it was demoralizing to see some of those same people experiencing revolution-fatigue and allowing themselves to become desensitized to the military propaganda machine. What is truly heartbreaking is losing sight of one another’s humanity, and descending into the pit of mounting cynicism, apathy, or, worse, condoning violence.

What I miss is our quick-wittedness. In the Cairo I was born and raised in, one was surrounded by a love of language. So it came as no surprise to me, for example, when our revolution erupted, that masses of peaceful protesters chose to express their dissent and dreams in poetry, chanting jubilantly from Tahrir Square. Wit and verse were always sport, and a kind of national pastime, during the three decades I lived in Cairo. Never mind the high illiteracy rate; it wasn’t about being book-smart. “Knowledge is what’s in your head, not in your notebooks,” an Egyptian saying shrewdly justified (in Arabic, this rhymes, too: el 3elm fil rass mish fil korras).

Also our excellent sense of humor: the innocent joy we take in dancing. Women, men, and children of every shape, age, and class love to shimmy and shake with sensual abandon. This is yet another example of how the current ostentatious religiosity is an instance of cutting off our nose to spite our face. When an exuberant city and its people that were once open to the world, and celebrated for their effortless wit and (belly) dancing, become censorious and closed, they self-sabotage. Thus, a city/people downplays their natural strengths and exaggerates their weaknesses.

I was fortunate to be raised in a household that hosted a sort of informal literary salon, where literary lights like Yusuf Idris (our Chekhov), Louis Awad (intellectual giant), and Ahmed Ragab (famous satirist) passed through. Celebrated poets like Farouk Goudah and Abdul Rahman Al Abnoudi were family friends, as well. So, certainly, I recommend all those. Later, as a young man living in downtown Cairo, I had the opportunity to meet Alaa-Al-Aswany (the movie adaptation of his best-selling novel Yacubian Building was being filmed in my building), as well as up and coming writers, such as Yusuf Rakha. Another Egyptian novelist that I’ve not met, but would like to and who I recommend is Son’allah Ibrahim, revered for his work and for publicly refusing the Arab Novel Award, a prize given by the Egyptian Ministry of Culture, under Hosni Mubarak.

But perhaps in our stifling patriarchal society it is more helpful to recommend female writers, who (perhaps of necessity) also double as inspiring activists, such as: Nawal El Saadawi, Ahdaf Soueif, and (the recently deceased) Radwa Ashour. Also, if I might be permitted one expat living in Cairo for the past couple of decades and who knows/loves Egypt well, I would add American author Maria Golia to this list of rousing voices.

In a review of my new book (in the Alexandria Quarterly) the reviewer writes: “Yahia Lababidi dedicates his collection Balancing Acts to his native Egypt. But it’s ostensibly not the Egypt of Giza and Tutankhamen . . . nor of sprawling Cairo streets and bustling bazaars. Lababidi . . . seems to have something other, and otherworldly, in mind.” Perhaps, they are right. But if so, in my defense I will say that Cairo easily lends itself to myth and metaphor. And while I love all of the lived realities above, which perhaps I do not address directly in my work, I carry the real and imaginary Cairo in my heart—and I visit it in my daydreams, the way one might visit the drowned continent of their youth. This is to say I recognize that the carefree innocence and exuberance that I ascribe to it has as much to do with my younger self as the inscrutable city.

Besides house parties, where literary life thrives, I recommend downtown Cairo, the cultural belly of the beast. It was in downtown, where thinkers and dreamers met, that the Revolution sparked, and in Tahrir (“Liberty”) Square where protestors continued to gather to voice grievances. Pre-revolution, I crossed Tahrir Square for nearly a decade on my way back home from work (at the UNESCO Cairo Office), and I entered a kind of enchanted world. It was there, in downtown Cairo at the iconic Café Riche, that one afternoon I witnessed the deliciously playful vernacular poet and national treasure Ahmed Fouad Negm erupt into a spontaneous call and response performance piece with other literati that were gathered there. The Greek club across the street and the Grillon bar further down are other spaces downtown where one can go for quickening, intellectual conversation, as well the once vibrant cultural center Townhouse Gallery, which came up (in 1998) as I was living in downtown Cairo and, following a prolonged fight with the state government’s censorship bureau, has recently collapsed.

Moulids, or birthday celebrations of Sufi saints, fascinate me. In the heart of Islamic Cairo, for example, you might encounter a hallucinatory, dream-world you would not have imagined existed: of snake charmers; bearded ladies; crowds ecstatically singing, dancing and chanting, in trances (induced by hashish, Divine love, or both); and much, much else. These wild carnivals attract millions of souls seeking spiritual or secular release, and it’s best to navigate them with a guide so as not to get lost or harassed in the press of flesh and overwhelming free-for-all. For the outsider, it is not easy to reconcile such amoral revelry with the city in its comparatively more sober state. But several times a year, the scarcely repressed chaos lets its hair down and everything is permitted in the name (or under the cover) of G_d and his saints. This, too, is part of the hidden, contradictory, and mysterious heart of Cairo, and Egypt at large.

In the chaotic, pulsating street theater, where nearly twenty million souls jostle for space and negotiate their sanity in one of the most densely populated capital cities in the world. And by extension, passion lives in the coffee shops, where people watching, coffee- or tea-sipping, hookah-smoking, joke-swapping, and animated conversations are the best way to pass the day. If you want to escape the heat and (noise) pollution, then the thing to do is hop on a felucca, a wooden sailing boat, and let your troubles melt away along the Nile. (Bring a friend, music, and food or drink for a more lively ride).

In my book Balancing Acts there are many poems written during the three decades I lived in this great capital of memory, a few poems that address the decisive act of “fleeing the stable,” as well as cri de coeur poems that helplessly pine for all that I’ve left behind.

Here is a love letter, inspired by relocating to the US—an unfathomable 14 years ago—and looking back with longing, unable and unwilling to forget:

I buried your face, someplace
by the side of the new road
so I would not trip over it
every morning or on evening strolls

still, I am helplessly drawn
to the scene of this crime
for fear of forgetting
the sum of your splendor

then, there’s also the rain
that loosens the soil
to reveal a bewitching feature
awash with emotion

an eye, perhaps tender or
a pale, becalmed cheek
a mouth, tight with reproach or
lips pursed in a deathless smile

other times you are inscrutable
worse, is when I seem to lose you
and pick at the earth like a scab
frantic, and faithful, like a dog.

Cairo is a mad mother that devours her children. No matter how voluntary it may appear, exile is never really a choice. Yet exiles always feel a little posthumous; just as the exile’s love is absolute, pining as it does for an Ideal. So in a sense there is no outside Cairo, even though, in the devastating phrasing of Kenyan-Somali poet Warsan Shire, “Home is the mouth of a shark.” Here are a few more lines from Shire’s poem “Home,” which speak me better than myself:

“no one leaves home until home is a sweaty voice in your ear
saying—
leave,
run away from me now
i don’t know what i’ve become
but i know that anywhere
is safer than here”

Thank you for taking part in the latest 100 Days of Steem Challenge.

Thanks, for reading and your support.