How You Can Help Steemit, Inc Make Money (And Why You Should) 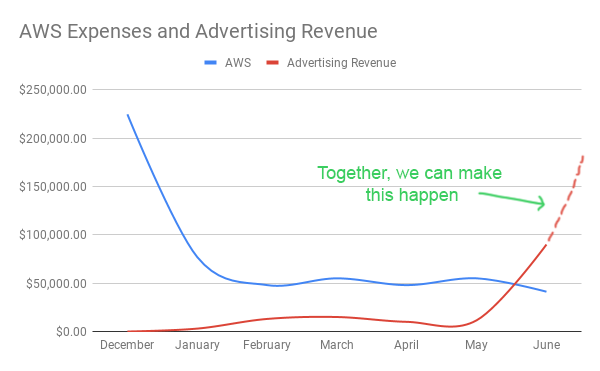 We got a rare (and possibly only?) glimpse into the finances at Steemit, Inc with @elipowell's recent post: Steemit, Inc. Financial Update

The most important part of that post was the following:

The only real variable is the advertising revenue. In order to not programmatically sell Steem each month, we need to bring in enough ad dollars to not only cover expenses, but make enough profit to ensure future stability. Obviously the sooner this happens the better so we can slow down the programmatic selling and ultimately stop it altogether.

For those of you who may not know, Steemit, Inc funds their operations by selling an inordinate amount of STEEM on the markets every month, which is likely weighing very very heavily on the price.

If they are able to replace that source of funding with an actual revenue model, it should:

Therefore, as holders of STEEM, we should all do whatever we can to help Steemit, Inc's advertising business be as successful as possible.

In traditional businesses, the owners love the advertisers, but the users typically hate them. Of course that's the case because the business owners get all of the money and the users get to be annoyed.

The whole point of the Steem platform is to turn this model on its head. Now the "business" is the Steem platform, and the users - you - are the owners. It doesn't matter that Steemit, Inc, a privately owned business, is the one actually selling the ads and receiving the money from it. All STEEM holders stand to benefit greatly from it for the reasons described above.

Since the Steem users are also the owners, it creates a very unusual situation where the users should welcome and support the advertisers instead of blocking and avoiding them.

This is like the holy grail to advertisers. If the Steem userbase can really understand how they benefit from the advertisers, and if the advertisers start to see that the Steem community LIKES them, I expect we might see a rush of advertising dollars, and REAL VALUE, into the Steem platform like we've never seen before.

What Can We Do?

It's pretty simple really - seek out the ads on steemit.com and click on them. Then to take it one step further actually look into the brand or product being advertised and maybe even buy their product if it looks interesting to you.

Even though I generally prefer to use other Steem interfaces like SteemPeak or Partiko, I make it a point to open up steemit.com on a regular basis to see who is advertising. It's even more difficult because I use the Brave browser and had to turn off the ad blocker for the site.

Why do I do this? I want to see who is spending their money to support the Steem platform! If you saw a news article saying:

You would probably be pretty stoked, and want to really support that company...at least I know I would. Well, guess what, THAT'S EXACTLY WHAT THE ADVERTISERS ON STEEMIT.COM ARE DOING!

Sorry for yelling, but it's true.

Right now I'm noticing that an "investment fund" called AMFEIX is being promoted very heavily on Steemit.com, including having the first "sponsored" post that I've seen on the platform. My guess (and it is only a guess) is that they are the primary driver behind the large increase in ad revenues shown on the graph in @elipowell's post linked above.

I wouldn't necessarily advise anyone to invest in their fund as it's very hard to tell if these things are legitimate, but you can at least click on the ad on steemit.com and check it out. If their ad campaign is a success, and it encourages them and/or other companies to put more money into the Steem ecosystem for advertising, then the benefits could be immense for the Steem platform.

It's a bit unfortunate that this particular campaign is for a very risky service that I can't really get behind and promote; however, hopefully in the future there will be many more campaigns in which that is not the case and where we can really showcase the power of the Steem community.

It's Not Only Steemit, Inc

It's important to note that this doesn't only apply to Steemit, Inc. The same thing goes for advertisers or supporters of any Steem-based app/company, be it Steemit, Splinterlands, Steempeak, Partiko, Steem Engine, PALnet, etc. At the end of the day it's all external funds coming into the Steem ecosystem. It means those apps can improve their products and services and not have to sell STEEM to pay their bills.

Steem Monsters / Splinterlands has NEVER sold so much as 1 STEEM in order to pay its bills. Now imagine if every Steem app, including Steemit, could say the same.

All of us, together, have the chance to make that a reality. There have been many articles written about how blockchain can transform the online advertising industry. Well, here it is. Right here, right now. Let's make it happen on Steem.