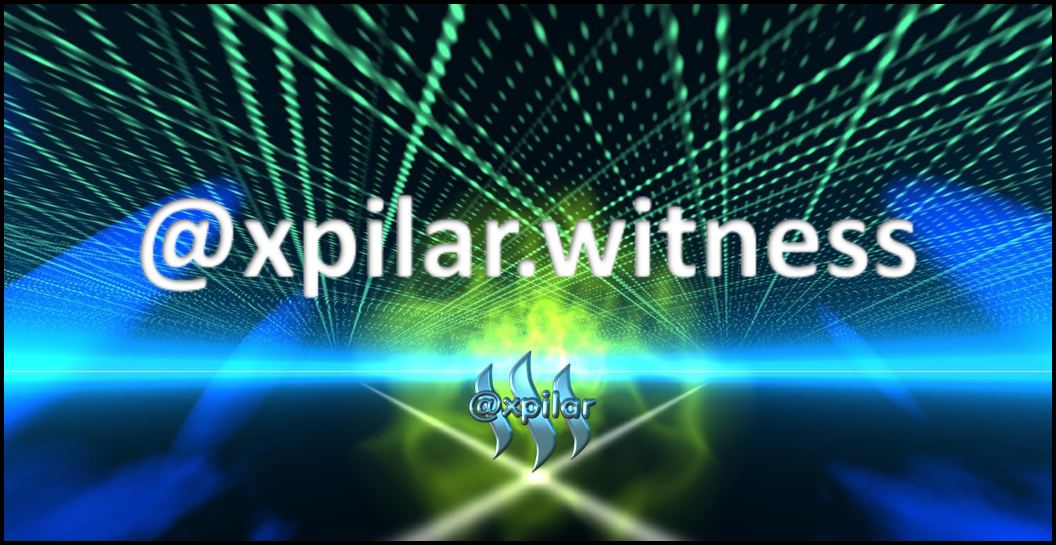 I want to start with myself

I started my journey here at Steem in July 2016, it is almost five years ago

During that time, I have met many people around the world who have become my friends here on this platform.

We were one of the few local communities that did not move to Hive during the split and we fought hard for Steem and Steemit as a blog platform to survive.

We are today the largest local community on steemit with 9,903 subscribers from around the world and 160 active posts every day

To be able to run such a large local community requires a lot of work and planning. Without a skilled team, this would not be possible.
A big thank you to my team, they are also moderators in the World of Xpilar community

10 days ago I announced my witness:

I want to contribute even more and I now want to announce that @xpilar.witness is mine and that I am running this witness

Thanks to everyone who voted for my witness "xpilar.witness"
We started in place 197 of the witnesses, now we are in place 36 after such a short time

Do you also want to vote for "xpilar.witness"

Voting for me:
https://steemit.com/~witnesses type in xpilar.witness and click VOTE

Here are the top 20 witnesses today

What are Steem witnesses?

The Steem blockchain requires a set of people to create blocks and uses a consensus mechanism called delegated proof of stake, or DPOS. The community elects 'witnesses' to act as the network's block producers and governance body. There are 20 full-time witnesses, producing a block every 63-second round. A 21st position is shared by the backup witnesses, who are scheduled proportionally to the amount of stake-weighted community approval they have. Witnesses are compensated with Steem Power for each block they create.

Without witnesses, you would not have received rewards or been able to post. Witnesses are elected by us in the community and it is your duty to vote. Each Steem Blochain account can vote for 30 witnesses

..done voting you as a witness sir @xpilar and thank you for standing by steemit and creat the world of xpilar.😊

Nice to hear, thanks for your vote @carine1988

Hello dear friend @xpilar I know you are a great leader and you will be one of the best witnesses, the platform and our community is in good hands with you. Greetings and thanks for those words towards us moderators!!!!

Nice to hear @franyeligonzalez , without all of you it would not be possible to build such a large community

My Pleasure To vote for you! I'm happy your team kept Art Alive on Steemit... I used to be a big part of @ArtZone many years back, Used to really Love this platform and Community. How do you guys feel Steemit has been doing the last few months? <3

Thanks for your vote
@stef1 and @myskye do a great job with it
I feel we are on the right track, new users are coming every day

I even gave your name in the proxy. I hope your community continues to grow. I like your work

Nice to hear, thanks for your vote @malay-face

We are trying to get more votes for you 💪

Yes I just sent a request over there

Hello dear friend @xpilar we will continue to support you, you do very well

Nice to hear, thanks @sacra97

I have always supported you @xpilar and will continue to do so.

Nice to hear, thanks for your vote @chibas.arkanghil

Here my vote for you @xpilar. Your good innovation to the STEEMIT platform was deserving.

Nice to hear, thank you @natz04 for your vote

I immediately share this to new comers, to vote for you @xpilar as witness here. Goodluck!

I've shared this information to all my steemit user friend most particularly to new comers.

You really deserves this @xpilar.

i am now done voting on you sir @xpilar, congrats sir & god bless you

Done voting ! I Will give you all of my support.

a very extraordinary achievement sir @xpilar, your decision is very right to be a witness, we are here to welcome and very happy for the decision that was taken, and you are a wise person in leading such a large community

Nice to hear, thank you @adi.pisces for your vote

i have in Steem community as a happy blogger since mid of 2017 and i have learnt a lot from it .

It has been almost a year and over after i joined steem as steem-supporter because I was against the chain split , i believed there is no need of secondary or tertiary blogging platforms and i am fully against the Hive split . After that they even started another project called blurt as hive was as well not welcoming to everyone and i am against that as well.

As a witness i am grateful to everyone who has/had voted me as a witness .
Currently I manage Steem Auto with more than 4200 users using it everyday and over 50K transactions processing per day and increasing .
I hope to bring more innovation and utility to the blockchain .

i have been quite fascinated with the work done by you and your team and i think you are doing an awesome work promoting steem .

I'd also like to thank @stephenkendal @kiwiscanfly for helping promoting and staking steem.

But it still is a long jorney to go and we shall grow together .

To vote me as your witness simply click on the image below ..cheers

Thanks for steeping up and being another witness "with a face." For which you get one of my many unused votes... Steem Auto is a very useful utility, even though I tend to be a 100% manual curator, myself. But I might still use it on such occasions as being away on holiday!

You do a great job as a witness for all of us and we really appreciate that
Hope there will be more witnesses who will give their feedback here.
We should all know our witnesses and what they do so that we can vote for them

Thank you @steem-supporter. we are because you are . Your support has been massive .

When I "unvoted" a bunch of old "dead" witnesses and voted for you, I ended up casting only a few of my 30 witness votes because I was just not familiar with most of the witnesses... and I could find almost no information on many of them. And I'm not going to just "blindly" hand out votes.

You might remember that "back in the day" one of the witnesses published a weekly "News from the witnesses" post that at least helped people keep in touch with what was going on... and it made it easier to vote intelligently. Sadly, it's a lot more difficult, these days...

I am also unfamiliar with many of them and want to know who I am voting for.
@pennsif "steem news" will once a week bring news from the witnesses

This is so amazing @xpilar, you really deserve to be @xpilar.witness.
Because you are a very fair leader and very wise in responding to all problems.
We all welcome you as @xpilar.witness with great enthusiasm.

Nice to hear, thank you @jasonmunapasee

Thats a good point to let community hear from the witnesses on a regular basis what they are doing around steemit ecosystem!

Yes @axeman, I hope all the witnesses find their visiting time here 👀

Ever since I knew you and the inception of WorldOfXpilar, you've always stood still to steem and have done a lot in your community as well as steemit. Weldone with your good work and I know soon, you will be among the top 20.

Nice to hear, thank you @maxwellmarcusart

Good to hear within a very short of days @xpilarwitness has moved to 36 from that long button; wow your efforts speak a lot here and I am happy peoples (Steemians) noticed it and appreciate through their vote...

Keep the good spirits and continue working towards that goals; proud of xpilar members community.

I shall continue spreading the news to others to vote for you..

Nice to hear, thank you @davidad

You are welcome.. @xpilar

Nice to hear, thank you @kakilasak

this may be better

thank you @amaroftheking for your vote

Congratulations. This is a big win to the world of xpilar , to steem and to steemit universe at large. @xpilar is great

Thanks, it's nice to hear that

I will try again. Thanks

Thanks for the kind words @sultan-aceh, it's nice to hear that

Lately, we almost forget that the Steem blockchain is run by different witnesses, maybe because everything is running well. As soon as something is wrong then we notice that there is no magic but people and equipment behind. It is a good idea to let the Witnesses know that we would like to hear what is happening behind the scene :)

Yes @stef1, many do not realize that we are dependent on our Witnesses
I hope all the witnesses find their visiting time and comment here

Just voted for you ! Thank you for all :)

Dear @xpilar, I'm glad you made the right decision to become a witness at Steemit. And I am happy to support you with my voice and ask the members of the @steem-bru Community to support you and vote. Good luck to you!

Thanks, it's nice to hear that @vipnata

Huge thanks for keeping as inform of the major responsibility of being a witness. On my part as a steemian I wasn't able to vote for any witnesses as of the time being. I felt ashamed of myself to be honest because I didn't bother to know the importance of steem witnesses but now I am very much well informed. Luckily I came across with a post by @davidad that mention how to vote for witnesses. This time I am obliged to vote for my 30 witnesses, as of the time being I am searching and knowing what they have done so that I can vote wisely. More power!

Thanks, nice to hear that @nickjon

Good day and Huge thanks @xpilar. I am working on the content right now in promoting steem witnesses!

Yes @adikhen1, I hope many will answer by the witnesses

Great initiatived sir @xpilar thank you for letting us knew some information about you. You deserve our votes as one of a witness. We gonna vote and full support for you sir @xpilar

Nice to hear, thank you @sweetnaomi05

Thanks, nice to hear that @rosanita

Interesting..thank you for showing us