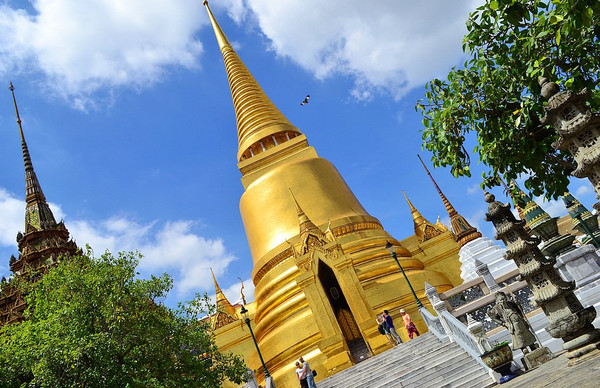 Impression of Bangkok: Although Bangkok is the capital of Thailand, it is not the same as imagined. There are not too many high-rise buildings, and the infrastructure is relatively outdated. There are indeed many temples, which are worthy of the title of "the country of a thousand Buddhas". The people in Bangkok are relatively friendly, and everyone’s life is relatively smooth. There is no fast footsteps in big cities in China. The environment is also very good. You can see plants and small animals around the city. Generally speaking, the city of Bangkok The construction is not as good as the domestic large cities, but the humanities in Bangkok are better than those in China.

Bangkok Transportation: There are probably several types of transportation in Bangkok: 1. The subway, it seems that there is only one line, that is, it leaves at Hua Lamphong Railway Station, passing through 20 stations and making a big circle 2. BTS, commonly known as elevated railway, the main one It is from Bangkok International Airport to the city (east-west direction), and there is one that runs through the north and south. 3. Public transportation. The bus fare in Bangkok is quite confusing. Sometimes there is no charge for non-air-conditioned buses, sometimes there are no charges for flight attendants, and sometimes they are charged again. But air-conditioned buses seem to be all charged, and the cost is proportional to the distance. The starting point is 7B (about 1.4 yuan), usually no more than 15B (3 yuan) 4. Water bus. I haven’t taken this one. I heard that I can come back to shuttle up and down the Chao Phraya River. The fare ranges from dozens of B. 5. Transition boats. This is similar to Guangzhou’s. The boat is a bit smaller. The price is about 4 B (about 0.8 yuan). 6. Taxi, I haven't taken a seat. I heard that drivers generally don't use the meter and are not used to getting change. It is best to prepare your own change. 7. Train. There are two railway stations in Bangkok. The terminus is Hua Lamphong Railway Station. There are trains to all parts of Thailand. Another North Station mainly has a train to the northern city. 8. TUTU car, commonly known as Shuangtiao car, this kind of car is very convenient and can pass through the streets, but it also has safety hazards, and the Shuangtiao drivers near the scenic spot will still kill people. of.

The problem of toileting in Bangkok: Although this problem is not very interesting, it is really important. There are few public toilets on the streets of Bangkok. You can find a shopping mall or a goat fast food restaurant. Personally, the easiest thing is to find a temple. After all, the temples in Bangkok are better than these. More. There is definitely a toilet in the temple, and it's free.

Bangkok attractions: Most of the attractions are concentrated along the Chao Phraya River in the west. The most famous ones are the Grand Palace, Temple of the Reclining Buddha, Teak Palace, Sanyou Temple, Wat Arun, etc. About attractions tickets: The tickets for attractions in Bangkok are still very cheap compared to China. The most expensive Grand Palace is only 400B (80 yuan), and there are not many attractions. There is no charge for the unfamiliar temples like the streets and end of the streets. The most important thing is that many of their tickets are purchased consciously, and no one checks the tickets at all.

Bangkok consumption: consumption is still cheaper than Guangzhou, such as a bag of fruits sold on the street 20B (about 4 yuan), fast food, one meat and one dish 40B (about 8 yuan), Thai massage for about 200B an hour (about 40 yuan) ), mineral water beverage store 7B (1.3 yuan), the most expensive ticket is the Grand Palace 400B (about 80 yuan), the accommodation is generally two three stars no more than 1000B (200 yuan), various fruit ice drinks 20-40B (About 4-8 yuan)

How to get to the city from the airport: The quickest way is to take the CITY LINE, starting at 6 am, on the negative first floor of the airport, the fare is 90B, about 25 minutes to downtown PHTLY THAI, here It is the city center, similar to the Tianhe Sports Center in Guangzhou. It is very convenient to go to the shopping mall SHOPPING from here. All the large and well-known shopping malls are nearby. It takes about 5 minutes by BTS and about 20 minutes on foot. ps: Since the end of 12, the new airport has been opened, so it can be ignored here!

Grand Palace: From the city to the Grand Palace, you can choose to take the subway or taxi. The subway can be transferred at the terminal of the city express line (you need to exit the station and then enter the station). The ticket is 400B, including the teak palace ticket (it seems to be 7 Effective within days), the building inside is very delicate, if you want to look carefully, it is recommended to stay at least half a day.

Wat Pho: Just behind the Grand Palace, the ticket is 100B, one hour is enough.

Sanyou Temple: Near the Huanan Feng Railway Station, I heard that it was built with donations from three Chinese. It is the tallest temple I have seen in Thailand. It is also very golden and the ticket is unknown.

Temple of Dawn: Also called Wat Arun, the whole temple is like a rocket waiting to be launched. I personally think this is the most worth visiting attraction in Bangkok. Tickets are 50B. You can climb the temple tower and overlook the entire Bangkok city and the banks of the Chao Phraya River. , The scenery is indeed pretty good.

Chao Phraya River: The width of the river should be the same as that of the Pearl River or slightly wider. The waves are big and the water is very yellow.

Floating markets: Most of the floating markets in Bangkok are located in the suburbs, dozens of kilometers away from the city. Generally, few people can go there by bus. The most popular choice is to go to Khao San Road for a day trip with a group. I heard that the price is around 600-800B, including round-trip tickets and the like.

Weekend market: In fact, it’s Dazahui. You can buy everything. Friends who like shopping and gadgets should check it out.

Khao San Road: a gathering place for tourists, not far from the Chao Phraya River, not far from attractions such as the Grand Palace Temple of Dawn, so many tourists are attracted here, a bit like West Street in Yangshuo, cafes, bars, massage shops, hawkers everything , And it’s very lively at night. Eat: There are really few restaurants in Bangkok, and many roadside stalls