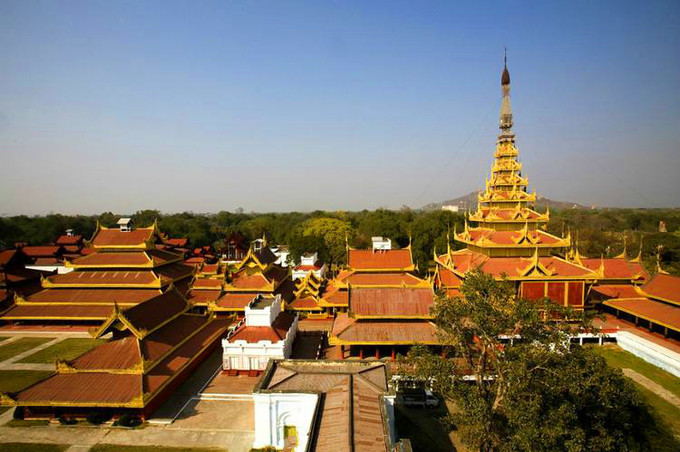 What to do in Mandalay

The picture comes from the Internet

Located in the urban area, Mandalay Palace was the palace of the last dynasty in Myanmar. The original building was completely destroyed during World War II. What you see now is that the Burmese government rebuilt it on the original site in 1989 based on historical data. The entire palace is a square, 3.2 kilometers, surrounded by a moat and city wall. There are four main entrances and eight side gates. There are 104 large and small palaces in the imperial palace, including the living room of the emperor and concubines, the hall of the emperor and ministers, bathing rooms, etc., all buildings are made of teak wood, red, and some tops have scenery paint strokes.

Mandalay Hill is located in the north of downtown Mandalay and the northwest of Mandalay Palace. It is the highest hill in Mandalay, with a height of 236 meters. Legend has it that the Buddha Shakyamuni preached the Dharma here more than 2,000 years ago, and after attracting countless Buddhist followers, he gradually became famous. The climber will go through more than 1,700 steps, with a roof, and there are also large and small temples along the way. Among them, a temple halfway up the mountain enshrines 3 remains of the Buddha. About 2/3 of the position, there is a gilded statue of Shiyata Buddha, pointing to the Grand Palace. On the top of the hill is an Indian temple. The root square pillars are connected to the vaulted top to form a circular corridor. All walls and pillars are covered by glass and gleaming in the sun. The wall in the middle of the temple also says "The person who wants to live long life should be sheltered by the shade of the Mandalay Hill. Standing on the top of the hill, you can overlook the entire Mandalay City. It is also an excellent place to watch the sunrise and sunset.

The pagoda is located between Mandalay Hill and Mandalay Palace, not far from Shandamuni Temple. It is also a group of white pagodas with a gourd-shaped top. The pagoda was built in 1857 and its full name is Mahalokama Rushen Stupa, and it is also called "the world's largest merit pagoda" by the Burmese. The Gudu Tao Pagoda is very famous because when its construction was completed, King Min Dong gathered 2,400 monks from all over the Indochina Peninsula, and completed the fifth Buddhist scripture revision conference here. These revised Buddhist scriptures were engraved on 729 marble steles in Pali script. Later generations built small white pagodas on the periphery of each stele, which are neatly arranged and quite magnificent. These scriptures are known as "the largest books in the world" because of their complete content and grand scale (it is said that if a person reads eight hours a day, it will take one and a half years to finish reading these scriptures)!
4.jpeg

The picture comes from the Internet

Located just south of the Gudutao Pagoda, it was the palace of King Mindong and the place where he died. The entire building was originally in the palace, but because its successor avoided the death of King Min Dong, the entire building was moved to its current location and became a monastery. It is also because it was once the bedroom of King Min Dong, so the whole building is much more exquisite and complicated than ordinary temples. The whole building is three-story, supported by hundreds of teak columns at the bottom, forming a suspended elevated chassis, which is beneficial for ventilation and moisture prevention. The main hall on the first floor is surrounded by a circle of wooden corridors; the two floors that are gathered up step by step have quadruple eaves on the periphery. The pillars on the outer door wall of the main hall are equipped with exquisite carvings, densely packed and dazzling; and the inner walls and roof are painted with golden wall paint, which is why the title of golden palace comes from.

Located on the west side of the Golden Palace, it was built by King Min Dong during the same construction period as the Mandalay Palace. The original building was all teak wood, and it has been known as the most beautiful building in Mandalay before it was burnt down in 1890. Most of what we see now was rebuilt on the original site with cement in 1966 by the Myanmar government. Although not as luxurious as teak, it still retains the original architectural prototype. The main entrance needs to climb more than a dozen steps, and then to the corridor outside the hall. The whole building is mainly white walls, doors, windows and tops are equipped with golden wood carvings, the style is very similar to European cathedrals. The inside of the main hall is mainly a place for chanting and reciting the Buddha, except for the pillars. It is similar to an indoor basketball court and looks empty.