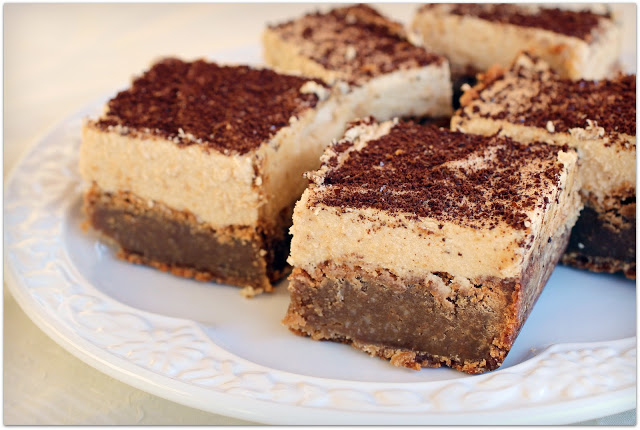 Okay, so I thought I had already found my perfect brownie. I thought I was content and never needed to try another brownie recipe again. But I was wrong. So wrong. Not only are these brownies chewy and fudgy beyond all goodness, but the layer of icing (that is as thick as the brownie) adds a whole new level to this little piece of heaven with its creamy and soft texture, which actually makes these babies quite tall, therefore yielding a thick bar of yummy chocolate goodness. But you’ll have to try them for yourself, as the Rae says in her book, The Pioneer Woman Cooks, there are millions of different of brownie recipes out there ranging from the extremely gooey, to verging on a powdered mess. These are my type of brownie. I vastly prefer the texture of these, the flavor of the mocha icing and the chewy chocolaty brownie is just to die for. and, I’ve never made such aesthetically pleasing brownies before! aren’t they gorgeous?!? As far as methods go, these are not that different from other brownie recipes, so don’t be scared:) I highly recommend you try this recipe, and I will for sure add it to the family favorites binder. this one’s a keeper.
Now, get thee to the kitchen and prepare to be wowed!

Pioneer Woman’s Mocha Brownies
Brownies:
4 1-oz. squares unsweetened chocolate
1/2 lb. (2 sticks) butter
2 cups sugar
4 large eggs
3 tsp. pure vanilla extract
1 1/4 cups all-purpose flour
Mae’s Mocha Icing:
1/2 lb. (2 sticks) butter, softened
5 cups powdered sugar
1/4 cup cocoa powder
1/4 tsp. salt
3 tsp. pure vanilla extract
1/2 to 3/4 cup fresh-brewed coffee, cooled to room temperature
For brownies:
Preheat the oven to 325º F. Spray an 8-inch
square baking pan with nonstick baking spray.
To make the brownie batter, place the chocolate in a microwave-safe bowl. Melt the chocolate in the microwave in 30-second increments, being careful not to let it burn. Set it aside to cool slightly.
In a medium mixing bowl, cream the butter and sugar. Beat in the eggs. With the mixer on low-speed, drizzle in the melted chocolate. Add the vanilla extract and mix. Add the flour to the bowl and mix just until combined; do not over mix. Pour the batter in the baking pan. Spread it to even out the surface. Bake for 40 to 45 minutes, until the center is no longer soft. Set the brownies aside to cool completely before icing.
For icing:
In a large mixing bowl, combine the butter, powdered sugar, cocoa powder, salt and vanilla. Mix until slightly combined, then add 1/2 cup of the brewed coffee. Whip until the icing is the desired consistency. If the icing is overly thick, add 1/4 cup more coffee. It should be very light and fluffy.
Ice the cooled brownies, spreading the icing on thick. Refrigerate until the icing is firm (i usually prefer at least two hours), and then slice the brownies into squares.
HEAVENLY!

Personal Tips:
Add the coffee slowly. i added it all at once at one time and it made my icing very runny.
Remember all that stuff about tiptoeing around the kitchen so as not to make the brownies fall? forget it. with these babies i actually drop them on the counter to make them fall, and or take a spatula and press them down while their cooling. it will make them so much more fudgey and gooey. just the way i like ‘em:)
This recipe does not call for instant coffee powder on top, i added that myself when i realized that my mixture wasn’t strong enough. if you like tha way that looks (which i actually do) than don’t worry about it, however as a matter of forethought, make sure your coffee is strong enough before adding it to your icing.
lastly, you’d better have a friend who likes mocha as much as you do to share them with or you will eat the whole batch before the day’s out. i know i do, but I’m still finishing off my portion all by myself!

In the SteemFoods Community, you can only produce content with your own photos, it is forbidden to post with copyrighted and online photos. This is the first warning, thank you very much for your understanding.

You can review the post below to get detailed information about the SteemFoods Community.