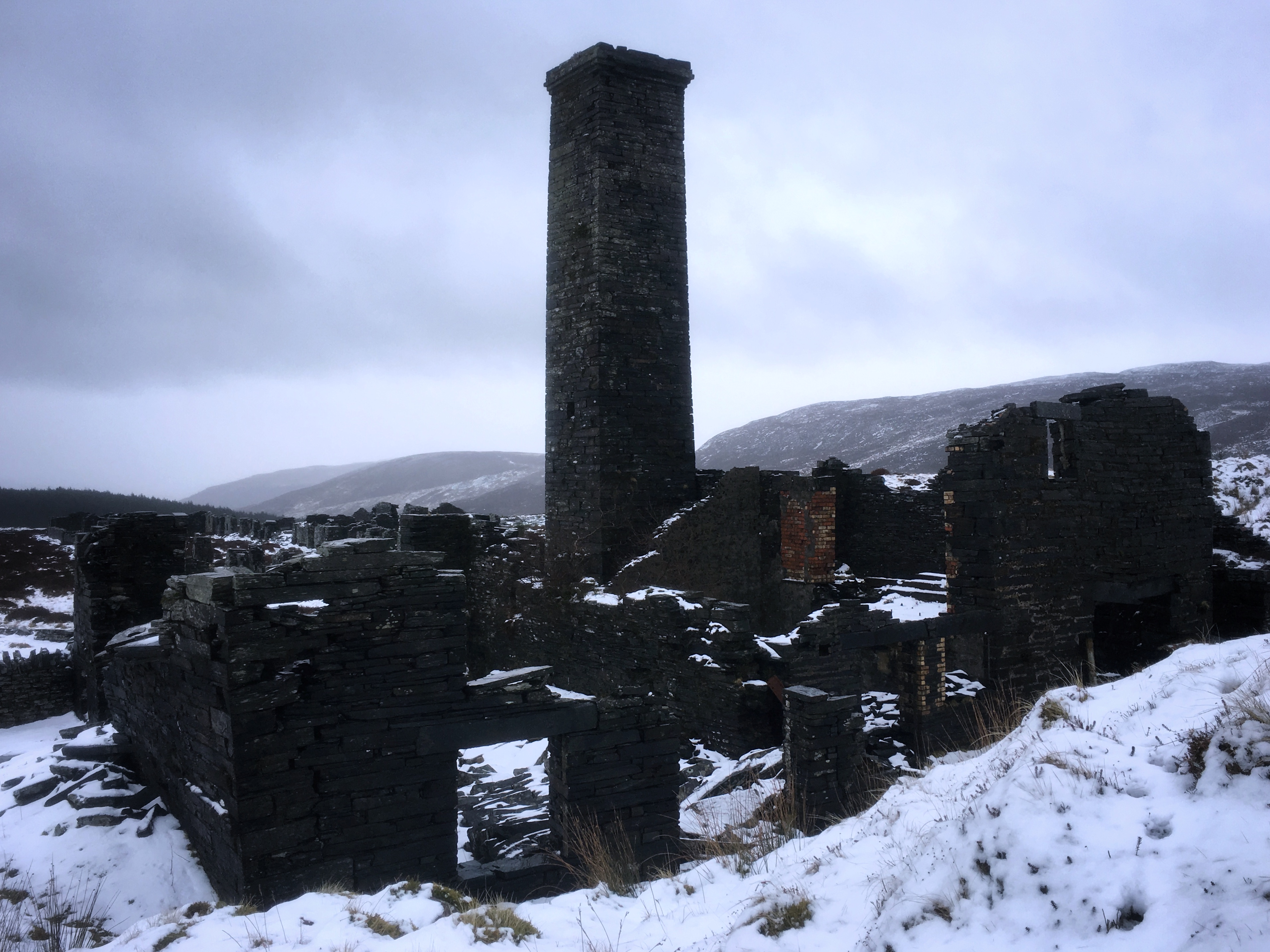 Isolated from the surrounding beauty of Snowdonia national park in North Wales is the old mining town of Blaenau Ffestiniog.

Due to it's ugly, industrial reputation, it is excluded from the park and stands out on the map as a grey island surrounded by luscious green scenery. Once regarded as the slate capital of the world, this place would have been a hive of activity in the late 1800's.

Today, the area is a shadow of its former self. Most of the mining operations have ceased or at least wound down to smaller operations and the disused buildings are all that visibly remain of a golden era long gone.

Due to it's remoteness, workers would have slept at the site in barracks. The skeletal remains of one of these mountain-top mining villages can be explored in depth at Rhiwbach quarry.

Januaries are typically grim up here. Blaenau Ffestiniog itself, once had the highest suicide rate in Europe in relation to population. The lack of natural sunshine and vitamin D, combined with the disappearance of a multi-million pound industry left the town in a dark place (literally).

We set off from the car, crunching through the top layer of snow that had turned into ice in the biting wind. We faced a four mile trek up onto the hilltops on a barely visible trail through the snow.

We picked out some fox prints in the snow and like a couple of Eskimo's tracking their next meal, followed them for about two miles to an old slate mine and its tunnels.

With no sign of the ginger critter and the tracks disappearing in the slush, we took the opportunity to make use of the vacant shelter and fire up the stove for some hot drinks and snacks.

It was nice to get out of the wind and we watched the weather battering the landscape outside, sipping our steamy beverages. It was short-lived though as the wind soon changed direction and funneled straight through the sheltered passage we were sat in, forcing an abrupt end to a much needed brew.

We continued our search, frequently struggling to keep to the trail as we gained altitude and the snow on the ground became deeper.

It wasn't long before we came across some evidence, hinting we weren't far away. An old mine cart lay upturned in the snow, wheels salvaged and the rest of it abandoned for nature to reclaim.

About three hours after leaving the warmth of the car, as we exited a small wooded area, the old mill tower of Rhiwbach quarry came into view, standing out as a black mass on a white background.

With materials in abundance all around, the village was constructed over two-hundred years ago using slabs of Welsh slate. Wooden parts long decayed and metallic parts salvaged, the roofless, rocky ruins sit silently where noise once dominated.

Walking between its freezing cold walls, it's hard to imagine the place being filled with grubby workers sitting in front of open fires, eating their stew after a hard days work down the pit. Paying homage, we fired up the stove again.

The excellent building qualities of Welsh slate are still showcased here, when even after almost a hundred years of inactivity, neglect and constant assaults from the elements, the structural strength and squareness of the slate blocks are visibly evident.

Other than a room that contained some kind of machinery base, it was hard to distinguish the living area from the industrial buildings.

The mill tower was impressive, still standing tall and straight with a small fireplace or kiln like opening visible at the foot.

We explored the ghost town some more before heading up the man-made incline onto the next hill for a birds-eye view of the site.

Leaving the village behind, we explored some of the old shafts and blast holes on the surrounding slopes. We came across a huge cave (probably blasted) and scrambled down to check it out. We joked it was the Welsh dragons lair and we were surely done for!

However, just like the fox, there were no fire-breathers home today. Maybe they were out together?

We fought our way through the increasingly tough terrain and up to our highest point of the walk. From here, we could see the slate mines that are still in operation with Blaenau Ffestiniog in the distance. An old pipework frame sits on the top of the hill marking the way for us to complete our circular before descending back towards where we had parked.

I'll be a little more thankful the next time I clock on for work in a nice warm factory, that's for sure!

Happy new year Steemians and thanks for reading

Interesting reading and nice pictures of the abandoned town 👍

Hey thanks man, really appreciate it!

Congratulations @x-53degreesnorth! Your post brought a smile to the TravelFeed team so we have sent you a smiley. Keep up the good job. 🙂