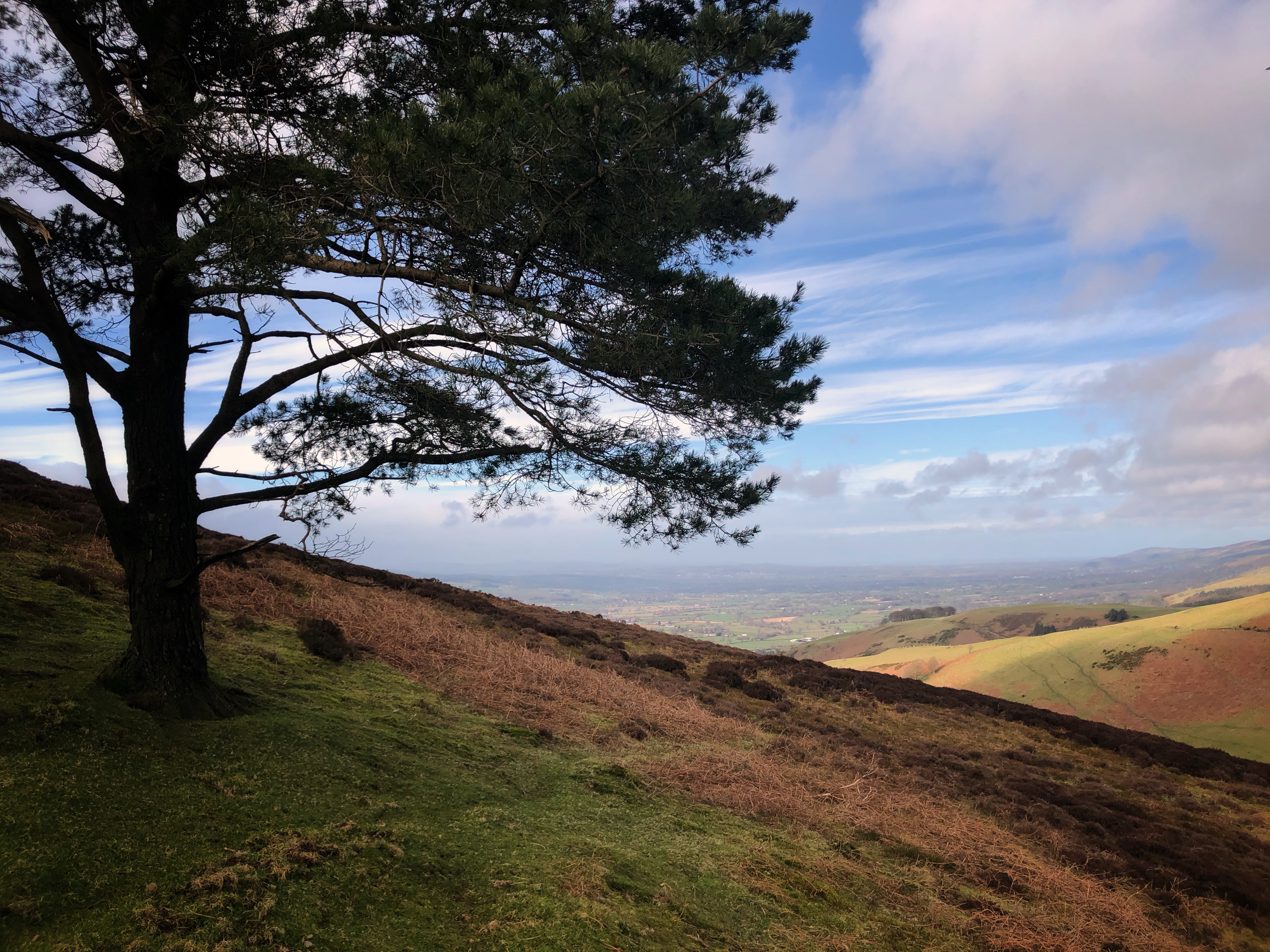 Stage three of our long distance hike presented us with a nine-mile hike to the mountain-bike friendly village of Llandegla.

Finally, unlike the first two stages, storms Ciara, Dennis and Jorge had pissed off and we had an ideal start with the weather situation as we struggled up the super-steep slopes of Moel Fenlli to check out its Bronze Age burial mound and cairn at the summit.

I won't bore you with history of this hill as I've already covered it a few months ago. If you're interested you can take a look here:
https://goldvoice.club/steem/@x-53degreesnorth/moel-fenlli

The opposite view, looking at the remaining peaks of the Clwydian range, was just as impressive, albeit under an ominous looking cloud.

After descending through where the fort entrance would have once stood, thousands of years ago, the path followed the old drover's track which skirted around the hillside, just below the summit's of the next two peak's.

Drover's, on horseback and accompanied by dogs, would transport cattle huge distances across the countryside to be traded or sometimes just to be moved between seasonal pastures.

View from the drover's road to another on the opposite hillside, above a dried up stream. Here would have been a good place to rest the cattle for the night when the water was flowing

They would be contracted by farmer's, who with little time to travel the long distances themselves, would trust the drover's to deliver their cattle from places like North Wales to as far away as London and Yorkshire and await their return with the money owed.

The dog's that accompanied the drover's whilst delivering the herd, were often sent back home alone. They would retrace their route, resting at the same locations and receive food from people who were paid to do so during the outward journey.

To transport a herd of animals these massive distances and keeping them safe whilst on the road for months was considered no mean feat and these fella's, although mostly illiterate, were held in high regard. So much so that they were exempt from the disarming acts of the 1700's, essentially leaving them guardians of the countryside.

Many of the road's themselves, which are often much wider than modern roads, date back to ancient times where the trade of cattle between tribes was an important part of daily life.

Just before the path left the comfortable width of the drover's track, we stumbled upon this ancient stone. The colours, which are not found on many other stones can be a clue to how long it has been battered by the weather for.

The slab which sits solid in the ground has, at some time, had iron hinges inserted, of which only one remains. The hinge looks a couple of hundred years old itself (at least) and the stone has probably been a way marker since pre-Roman times.

After scanning it thoroughly and unsuccessfully for any signs of Coelbren, the ancient British alphabet (which has become a bit of an obsession lately), we continued on.

Close to an old farmhouse, we found this peculiar gate. It must have held some sentimental value to someone as it had been bound together at the top from post to post with wire twisted by a steel handle inserted in the middle, stopping the posts from widening but in the process making it a pretty awkward gate!

The hills were a lot more green now as the heather patches came to an end. We were expecting to find some old burial mounds today and making our way over some unnatural mounds, we were surprised to find they weren't marked up on the map. The ones we were looking for were a mile up the trail.

At a four-way junction on the path there was a small information board showing the location of the burial mounds (tumuli) next to each other.

the reason for the small information board was obvious when it informed us, almost invitingly, that it's never been excavated and they don't really know what lies under them.

It goes on to highlight the importance of upland areas when burying the dead of ancient times. A mound up high would be created over the grave so the deceased' loved ones can be reminded of them from the settlements in the valley's below.

With our path running through the middle, this was the tumulus to the left of us

RH tumulus and Welsh/English information board

Reaching the top of the hill after the tumuli, a nice view of our finish line at Llandegla came into view below us.

On the way down the Llandegla we entered a part of the range called The Shelf, an unusually flat expanse of land for these parts which looked like it used to be a lake. A mound of rocks and woodland, stuck up in the middle. This was the supposed site of St.Garmon's well. There is also a well of an old saint in Llandegla village; the well of St.Tecla, from where the village gets its name.

Either side of some caves, back-filled by farmers to stop the sheep entering, was a brook that ran alongside the drover's road that we had now rejoined.

Huge boulders propped up the track, preventing it from being eroded away by the fast flowing brook. A nice example of structural reinforcement still doing their job today.

The track took us over an old bridge and over the finish line into Llandegla where a cooked breakfast in the local cafe awaited our arrival.

We are now twenty-nine miles in after three hikes and our next outing is pencilled in for Friday.

Stay safe out there in all this craziness and thanks for reading.

thank you for reading

This post was chosen to be voted by THEUNION.