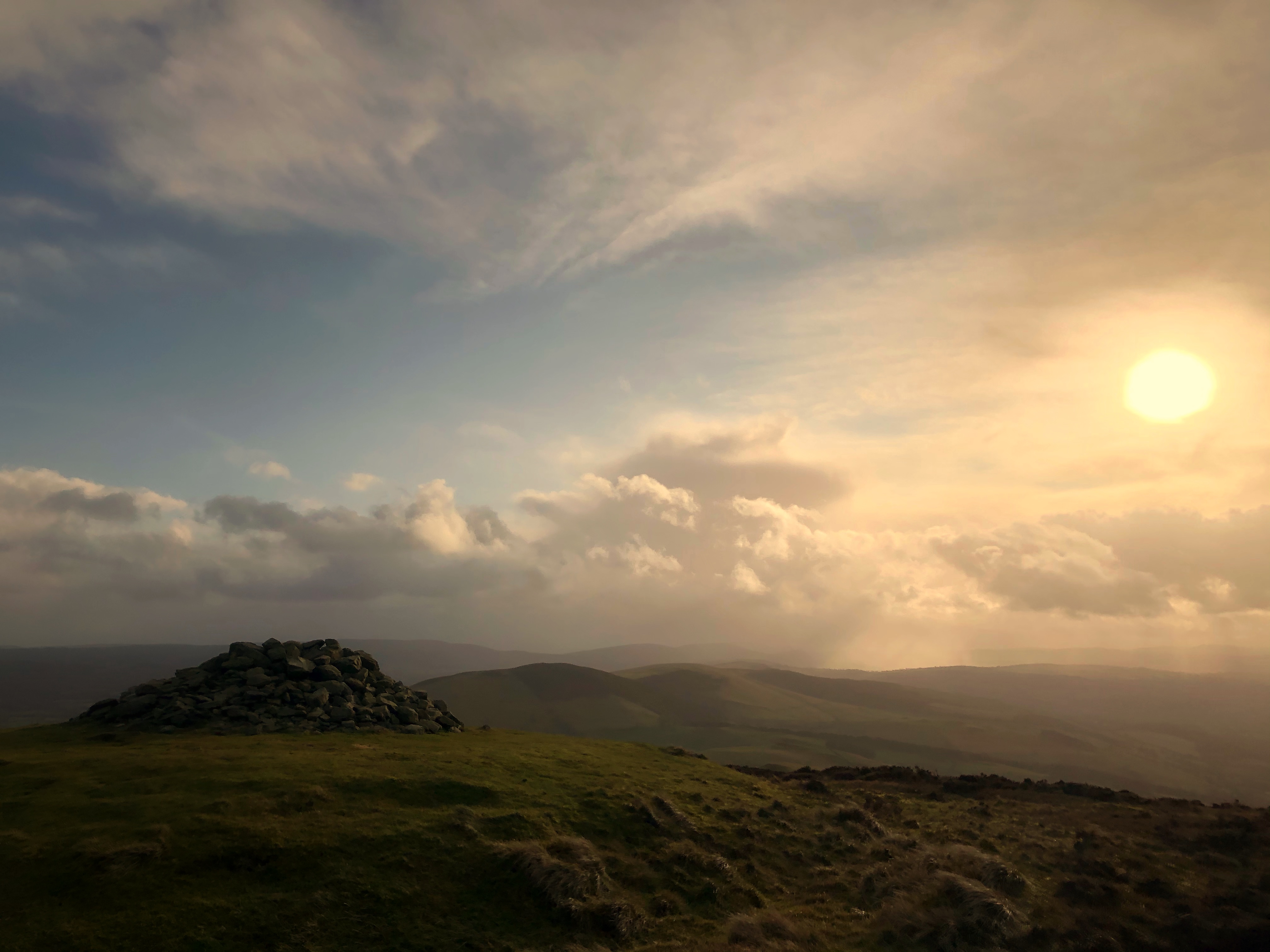 There were lots of Sunday walkers out today so I opted for a neglected trail heading up to the peak of Moel Fenlli, avoiding the crowds and going somewhere I hadn't been for a couple of years.

Foel Fenlli as it's also known, is a small hill in Denbighshire, North Wales. The second highest peak on the Clwydian Range, it features one in a series of Iron Age hillforts running along the peaks of the range. There is also a Bronze Age burial mound at the summit, which is marked by a cairn (pile of stones).

The cairn at the summit looking towards the southern peaks.

The remains of the 2,500 year old fort are impressive and worth the short but steep hike from nearby Bwlch Penbarras car park.

The fort would have benefited from the natural defenses of steep inclines on three sides and the trail takes you up one of them from the north. It winds away from the forest below and with hairpin turns every fifty yards you snake up the first part before hand-railing a farmers fence to near the summit.

There is certain fitness requirement for fence builders around these parts!

On a clear day there are some fantastic views north, towards Moel Famau, the biggest of the ranges peaks and the view west of the silhouette of Snowdonia national park. As I got further away from the car park with the van still in view below, I tested the range of the electronic lock button on my car keys to amuse myself, chuckling when I could see the orange flash of the lights from high up. Small things amuse small minds hey!?

Moel Famau in the distance and my silver van in the bottom right corner of the car park.

A lot of Welsh hills have weird, pointless gates with amazing views behind them. About two thirds of the way up you will find Moel Fenlli's.

From here the path leads up some steps and onto the first visible ramparts of the fort. The fort would have been built up all around with two high walls, separated by a deep ditch. There would have likely been timber defences upon the ramparts making it extremely hard for any invader to gain access. There is evidence of an unorthodox, diagonal fashioned entrance on the south side not common with hill forts of that time.

There is a fresh water spring at the top of the hill and the inhabitants of the fort would have had fresh water as well as security. There are some remains of the foundation stones of circular huts where people would have lived and kept animals behind the safety of the walls.

If it wasn't for the high winds and rainy days it would almost be a cool way of life. Until the rampaging Christians came knocking that is.

Welsh folklore has it that King Benlli occupied the fort, from where it gets its name. A Pagan, he was the target of Saint Germanus to be converted to the beliefs of Christianity. Benlli is portrayed as a tyrannical and wicked ruler. That could well be true, we will never know, but history is written by the victor and Benlli, was not. Apparently, the citadel was consumed with fire from heaven after persistent refusal to kneel to the cross and the inhabitants were never seen again.

All the shots I taken at the summit had a small green light flare coming through the lens. Maybe it was the ghost of King Benlli trying to scare me away!

There has not been much in the form of excavations either, the hill is covered with a thick layer of heather and anything still up there will be entombed under this rooty mess. There was a hoard of 1,500 Roman coins found in the early 1800's suggesting the site was reoccupied in the Dark Ages.

I followed the same path down towards the car park and explored the forest for a while, photographing some of the funghi that was thriving in the shadows of the pine trees.

I treated myself to hot cup of coffee from the flask once back in the van and paraded an interesting looking rock I'd found, on the dashboard!

Hi @x-53degreesnorth,
Thank you for tagging your post with #travelfeed. However, you added more than 5 tags to your post, which is not recommended (except for tribe tags) since only the first 5 tags are indexed by Hivemind, the code that powers most Steem applications, including TravelFeed. This means, that nobody can see your post on TravelFeed, including the TravelFeed curation team. Please edit your post and place #travelfeed within the first 5 tags if you would like your post to be visible on TravelFeed and considered for curation.
Regards, @travelfeed

Congratulations! Your high-quality travel content was selected by @travelfeed curator @worldcapture and earned you a partial upvote. We love your hard work and hope to encourage you to continue to publish strong travel-related content.
Thank you for being part of the TravelFeed community!

Congratulations! Your post has been selected as a daily Steemit truffle! It is listed on rank 2 of all contributions awarded today. You can find the TOP DAILY TRUFFLE PICKS HERE.