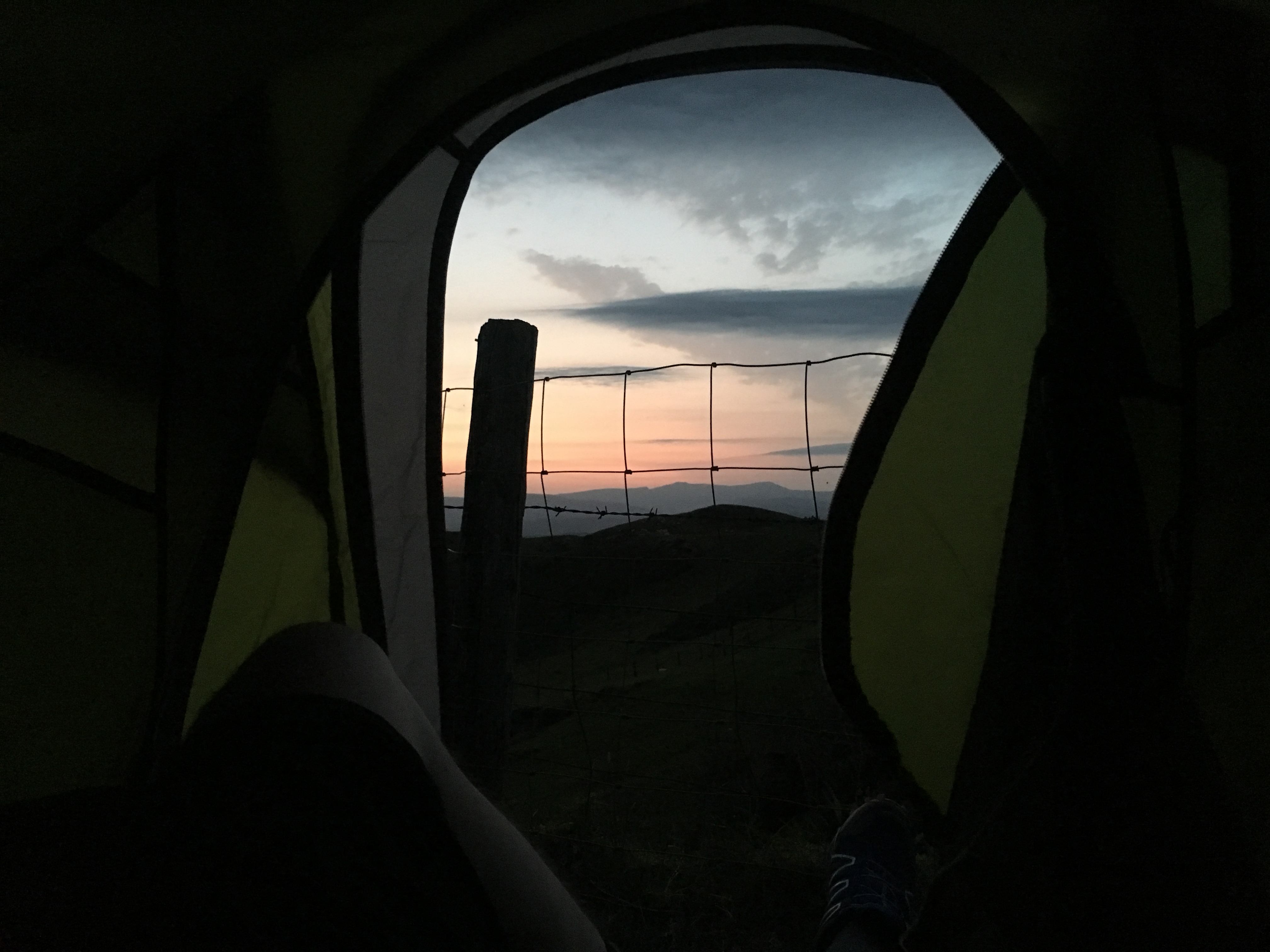 Apologies for the delay in between posts. Parenthood doesn't like six-day bike rides, never mind writing about them!

As idyllic as our camp spot was last night, we managed only four hours sleep and woke at a similar time, around 0420, for a communal effort at breakfast. When I say breakfast, I mean coffee like treacle and Haribo gummies.

We were roughing it now. Living primitively on two wheels. We were in the middle of nowhere, equidistant from home and our final destination. I looked at my bloody shins as I pulled a freshly, hand-washed pair of socks on, relieved some pressure from the horsefly bites and un-pegged the rest of my washing from the barbed wire fence, before packing up the tent and loading everything onto the bike.

I feel like I can speak for the three of us when I say that we felt hardened walking the bikes out of that field. We still faced the remainder of the climb that we'd cut short the previous night but there was no complaints or bad feeling. Every morning brought an overwhelming feeling of accomplishment.

As we exited the field the remoteness and vastness of the place was immediately apparent.

In 2012, April Jones, a five year old girl from this area was murdered. The case attracted a lot of national media attention and I remember watching on the news, the desperate efforts by the police to locate her body, which sadly was never recovered.

The police were joined by hundreds of members of the local community in order to trawl this huge expanse of hills and woodland. I thought about it a lot as we pedalled up hill. I thought about April's family and what they must have gone through seeing hundreds of people walking in lines, examining every blade of grass for any clue to their daughters whereabouts. A living nightmare, I can imagine.

We reached the highest point of elevation for our entire ride in a little less than half-an-hour. The summit was adorned with an impressive looking monument to Welsh broadcaster, author and traveller, Wynford Vaughan-Thomas.

A solo cyclist had been sleeping at the summit, using the horseshoe shaped walls of the monument as a shelter. We chatted with him for a while and discovered he was also headed to Cardiff albeit for a business trip and by looking at his bike, kit and calf muscles; a hell of a lot faster than us!

A high point of elevation meant one hell of a descent back down to sea level and the River Severn. There were now plenty of Red Kite's flying around as we approached Rhayader where there is a sanctuary for them to feed and nest. They are easily distinguished from other birds of prey by their kite like tail.

We stopped at a bridge that crossed the River Severn for some refreshments and a bit of maintenance on the bikes. Having rode only mountain bikes previously, I was unfamiliar with the long, thin Presta valves in the inner tubes I was riding on. In my school boy state, a routine air top-up quickly turned sour after failing to loosen the small nut that sits at the bottom of the valve stem and wheel rim. As the tyre was inflating, with nowhere to go against the tight nut, the valve stem sheered in half, gushing air out into the ground, kicking up a cloud of dust from the path.

Luckily I had made provisions in my preparation and had packed two spare inner tubes. What was a simple refreshment stop was now a wheel off job. With some help and a bit of a ribbing from the lads we were soon back on the road and nearing Builth Wells.

Today had been more of the jolly cycling holiday I had imagined. There was no pressure for the mileage or any race against the sunset and most of the days cycling had been downhill, unlike the brutality of the previous days.

We arrived in Builth Wells at tea time and sampled the towns kebab house, eating alfresco on the steps of a bank, having to move almost as soon as sitting down because a council worker wanted to water the hanging basket of flowers that hung above us. We joked with him about watering us before eating the rest of our food standing up and heading towards our predetermined camp location number three.

We'd pencilled into our plans a campsite for the end of day three as we thought we'd probably need a shower by then. Oh how we were right! Noyadd campsite just outside of Builth Wells, in a place called Llanddewi'r Cwm seemed to fit the bill.

We'd recently discovered that any place that contains the word 'Cwm' in its name is probably situated at the top of a ridiculous hill. Llanddewi'r Cwm was no exception. We climbed 350ft in less than 2.5miles and were greeted warmly by the farmer who ran the campsite as a side business to the farming. The awesome hosts gave us a sweet pitch overlooking the hills where the sun would eventually set and more importantly showed us where the shower was!

With another 50 miles and 4000ft of climbing under our belts we settled down for supper early after taking it in turns to grab a long hot shower. I must have spent forty-five minutes showering, it felt so nice. I had saved a clean set of clothes in my panniers for such an occasion. I jumped back into my sleeping bag and fired the stove up just in time to watch the sun disappear over the hills, leaving silhouettes of distant trees under a strange cloud.

Today was a good day.