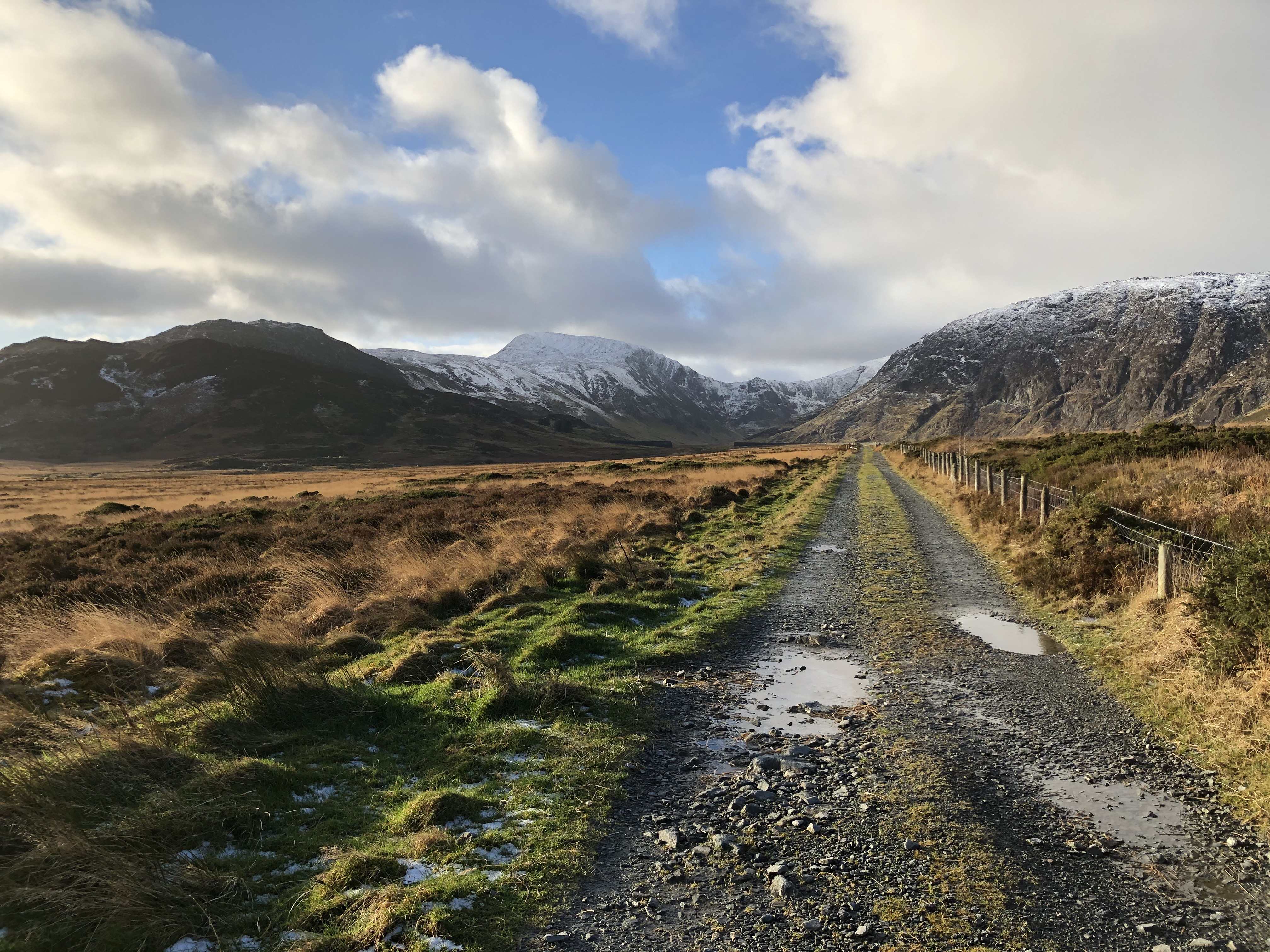 I'll be honest, it's been a struggle to drag myself away from the warmth of the house lately but today I finally gave myself the kick I needed and got myself up in the mountains for an early start.

It wasn't anything spectacular in terms of achievement, in fact - most of the ascent was done in the car on the way there. The narrow country lane takes you most of the way onto the hills to what has to be one of the most remote car parks in the whole of North Wales!

I arrived at the pot-holed car park just as the sun was appearing over the snow topped mountains in front of me. There are a number of routes that can be taken from here; including a popular trail which incorporates two lakes and a mountain hut where you can escape the cold and light the open fire.

Today however, I would be taking the route less travelled towards Llyn Eigiau reservoir and then on to an old, abandoned slate mining village a bit higher up the mountain.

A strong head wind hampered my pace but it was nice to feel some sunshine on my cheeks as I dodged deep puddles along the 4x4 track, leading me to the wall of the infamous Eigiau dam.

The first part of the wall that I came across had a huge opening in it. It was here on the 2nd November 1925 that the dam wall collapsed resulting in the death of sixteen people further down the mountain.

The gaping hole allowed a cascade of water, mud and rubble to wreak havoc on its way down the hillside. It gushed into a neighbouring reservoir, breaking its banks as well and in turn, sent millions of gallons of water and boulders straight into the village of Dolgarrog killing ten adults and six children.

Evidence of how powerful the torrent must have been can still be seen by looking at the earth that surrounds the failed part of the dam.

Here, looking away from the dam, we can see the gully that has been carved out by the water travelling down the hillside at speed.

This photo was taken immediately at the location of the wall collapsing. If the water can change the landscape so much after only just flowing out, can you imagine the ferociousness it must have hit the village with? It would have gained speed, collected rubble and combined with the water from the other reservoir, completely devastated the poor community of sleepy Dolgarrog.

It was believed that the death toll would have been much higher had most of the village not been in the theatre watching a film at the time.

Llyn Eigiau today holds very little water in comparison to a hundred years ago and is now popular for fishermen catching brown trout or even an Arctic char.

Gaining elevation slightly and heading away from the lake I approached my next target - the old slate village.

Looking back down the valley there were crisp views of Llyn Eigiau under a blue sky. You can see the dam wall at the end of the lake with a large portion missing. This was done purposely to prevent any further bursts.

However, the views behind me were a sharp contrast to where I was heading:

About half way down the valley there was a quaint little hut with white door and shutters. I used its steps to shelter from the wind and wonder what its purpose was. A small plaque above the door stated it was a local 'community hut' complete with a phone number for bookings! I smiled imagining a big line of people sploshing all the way up here through the mud, carrying chairs and cake for grannies 70th birthday party!

About an hour after leaving the car park I arrived at the ghost town that was the old mining village. The frozen hail appeared like snow on the ground and a mid-level wind whipped around in all directions.

The village is marked by the the remains of the old roofless buildings and pump houses that litter the area. Their sharp slate corners glistened in the sunlight that was trying to burn through the low cloud that had began to form on the mountain tops that flanking me.

I explored around the dilapidated buildings , following some unusual animal prints in the slush but losing them when I came to a small stream.

Locating a grassy route over the water I approached what looked like an area that had been heavily mined. An ugly black scar on the hillside accompanied by an equally ugly spoil tip provoked me to imagine what it looked like before it was ravaged for its famous Welsh slate.

Stepping over some fresh wild pony droppings on the grass, I expected to find them sheltering somewhere by the mine.

The mine sat in a bowl, surrounded by snowy mountains and the wind fell silent. I scanned the area for ponies who can get super defensive if they have foals in tow. Satisfied I was alone I explored around the face of the mined cliff face, looking at nothing in particular but enjoying the time out of the wind.

I found a small shelter that would have been ideal had it not been full of toilet paper and who knows what else!

There were some rusty steel objects scattered in the ice but not much else of interest to be found.

I decided to utilise one of the old ruins to cook up some food before heading back. There's not much up here that is dry so I'd pre-packed some kiln-dried wood in my rucksack and my Biolite stove which travels with me on every outing.

I'd rejected the first few shells as their walls either weren't high enough or there were too many openings causing the wind to funnel into the space and whip around violently.

After a short search I found the perfect little spot complete with an icy table and a bench!

The space had four walls and the only opening was facing the relative shelter of the mountain in front of me. Within minutes I had a fire going and began boiling a pan of water.

I had some porridge pouches left over from my monstrous cycling adventure last summer and salivated at the thought of some hot steamy porridge at my little stone table.

Yes, table for one and can you turn the air-conditioning off please? It's a little chilly.

After preparing my porridge I removed the pan from the stove and placed my freezing hands close enough so that the flames gently lapped my fingers as I held my steaming pouch of oaty goodness.

I kept the stove going until all the wood was gone and then replaced my gloves onto my warm hands to keep the heat in.

As I waited for the stove to cool enough for it to be safely stowed back in my rucksack, I peered over the walls of my improvised dwelling and savoured the moment, marvelling at the white and black, rugged and daunting masses of rock that towered around me.

I headed back the way I came (roughly) and upon arriving back at the dam I was treated to the illusive herd of wild ponies that I had expected to see earlier.

They were sheltered up against the dam wall and must have came down away from the snow line to find something to eat.

Not seeing any foals amongst them, I took the opportunity to get some close-up shots before the white one made it clear the photo shoot was over! You can see him beginning to get agitated here:

Albeit a short and relatively flat hike, it was good to get out of the house. I always find a walk with some points of interest feed my desire to get back outdoors and I'm fired up now for my next outing, wherever that may be...

I appreciate you stopping by, thanks for reading.