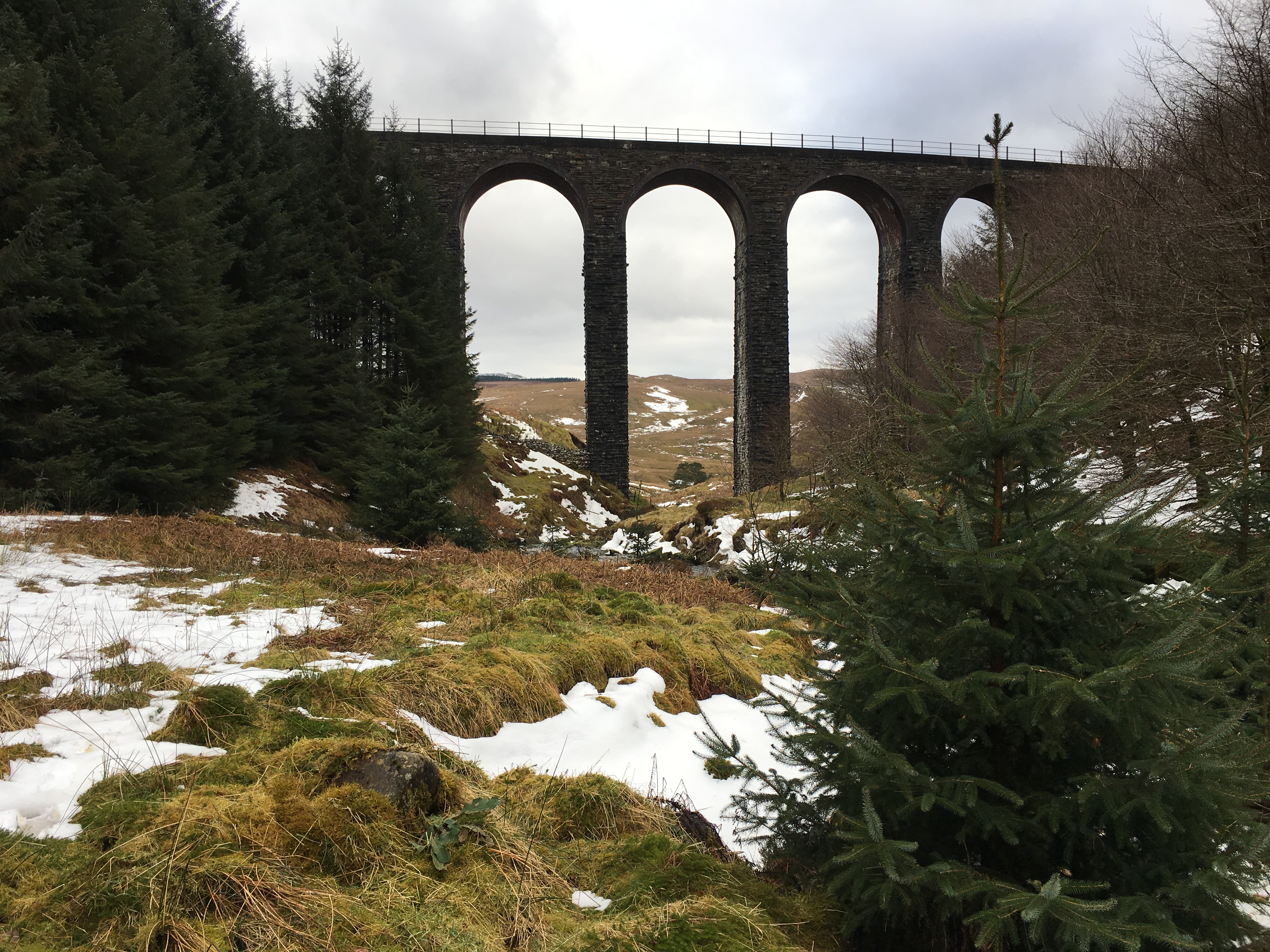 I've been snatching every opportunity to get outside lately.

I get two weeks off over the holidays as the factory where I work shuts down for annual maintenance. Susceptible to severe cases of cabin fever due to repetitive TV and electronic toys, I'll pick out somewhere remote and obscure on the map and make a beeline for it!

This time round, it was one that had been burning a hole in my 'things to do' list. Cwm Prysor viaduct sits on a disused railway line heading through Snowdonia national park in North Wales. The line would have once serviced the many quarries and mines in this area, transporting things like slate and gold away from the mines to the industrial town of Blaenau Ffestiniog to be processed.

The viaduct itself sits almost on top of a mine. A gold one.

The Arenig gold mine is disused and hasn't produced anything since the thirty-five ounces of gold that were mined from there in the ten-year period from 1898-1908. It was purchased again in 1910 but no work was ever undertaken.

The air was really cold and there was a light dusting of snow on the ground. The weather was overcast but no rain was forecast. Our walk was pretty easy, following the flat, old railway line (minus the tracks) the short distance to the viaduct, try and locate the mine and continue along the railway for a few miles before heading back the way we came.

Carved into the rocky hillside, the trail is like a big long corridor with huge granite walls either side. Acting like a ledge on the side of the hill, we hiked through the snow that had gathered and took some pictures of the ice that had formed from the water running off the slopes.

Not far from where we had parked and after about twenty minutes of walking, the viaduct came into view. We had read that the mine was located at ground level, close to the forest.

We had also read that it can be very prone to flooding and some guys had problems after entering through a tight gap, found themselves up to their waists in freezing water and struggled to get out the way they went in. Scared away by the forum stories, we were happy with just knowing where it was!

If the mine was at ground level, we thought it would be best to continue onto the viaduct and get a birds eye view of the terrain below, looking for any tell-tale signs of shafts, inclines and adits.

After a good look at the stream and surrounding area from above, we thought we could see some unusual mounds on the grassy patch to the left of the stream. The opposite side was thick with pine trees and it seemed unlikely there would be a mine under them:

We agreed to continue our hike, bag some mileage and explore under the viaduct on our return leg.

The trail didn't differ much in terms of incline or terrain. After all, it was built this way for the ease of transporting materials and was now an adopted footpath, transporting people through an otherwise ignored area. Occasionally we would come across old bridges that once crossed above the tracks.

As we turned a corner around the hillside, the wind funneled into the corridor of snow and ice and blasted us, head on, stinging our cheeks as the ice particles whipped up from the snow drifts. We called "Brew time!" and nestled in behind a rocky outcrop to fire up the stove.

As we drank our hot brews we were treated to a low-level pass from a C130 RAF Gunship. The rumble almost shook the tea from my cup as it passed over head. I managed to record the back end of it flying away and grabbed a screen shot. Can you spot it, framed in between the branches here?

On our return leg we decided to shake things up a bit and try to create a circular route back to the car. We headed up onto the hillside we had traversed around the side of and over the tops in an attempt to drop back down to the railway line later on.

As we gained elevation, Llyn Trawsfynyd came into view (the lake in the distance) and some skeleton buildings from industries gone by, littered the landscape. There is also a site of historical interest here in the form of an old Roman training ground. Wading through the long, wet grass, we explored some lakes and mine workings on the tops before being beaten back down to shelter by the icy wind.

It wasn't before long that we dropped back down to the ledge of the disused railway and just as it happened, right next to the viaduct. We scooted down the bank and under the arches to explore the ground next to the stream.

We could see plenty of evidence in the form of spoil tips and unusual lumps on the ground, covered in moss - but no obvious way in. Without too much disappointment, we continued exploring under the viaduct on either side of the stream before heading back to the car just before dusk.

As we reached the car, we picked out the silhouette of Cadair Idris; a mountain on the West coast, sitting perfectly at the end of the valley with a orange-pink hue around its peaks. A fitting end to an interesting winter walk.

What an epic way to spend the day. That icy Valley you had to walk through and the frozen water falls on the right side there sent a shiver down this southern softie's spine!

I've not explored that part of Snowdonia yet but the viaduct looks like a beautiful walk... I'll probably wait til Summer though!

I've climbed up Mount Snowdon a couple of times but yet to see it as clear as every other travel feed post about hikes around the National park 😂 what's the secret? Haha

Thanks for writing this comment through TravelFeed.io!
You have received a 10% upvote from us. We hope to see you soon on TravelFeed.io!

haha I live about an hour away and I still haven't mastered the clear summit shots of Snowdon yet! Even when it looks sunny in the car park, the summits can often be a different story!

Summer is probably your best bet, although the trails can be really busy, especially on weekends.

Thanks again for reading, really appreciate it

I also just had a couple of weeks off because the place I work was shut down for a while. It was actually only shut down for about a week, but it was also so slow at this time of year that I was able to take some extra time off.

I didn't go on any adventures quite as great as yours, but I did take the opportunity of both time off from work and better-than-usual weather in my area to go on some pretty long walks with my dog, mostly near our home, but including a nice secluded river parkway.

That is what it's all about, making the time to get outside. It doesn't have to be to the top of a mountain, it can be something simple like taking the dog out.

I would love a dog to accompany me on my adventures but my mother in law is allergic!

It's important to get away from the noise of every day life - not enough people do it and I can only imagine they will realise when it's too late. It doesn't matter how small or insignificant - you are still doing more than most!

Thanks for the comment, I really appreciate people reading my stuff and apologies again for the late reply!