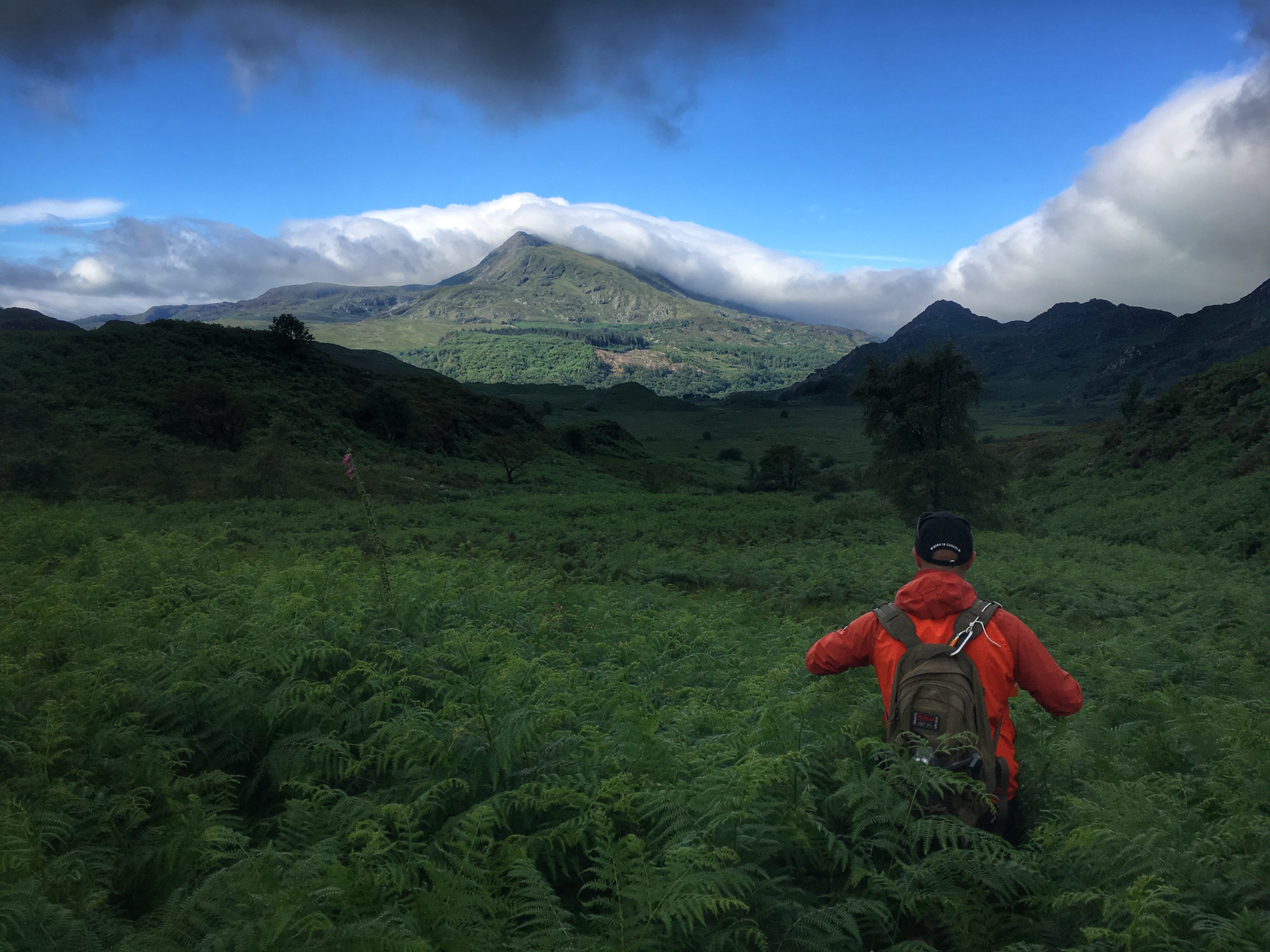 Capel Curig. The wettest place in Wales and one of the wettest places in the whole of the UK; according to the Met Office's measurement of annual rainfall.

However, at the height of summer, this particular visit was about as dry as you will find the green slopes of Capel Curig.

I'd walked this route for the first time last year and fancied another pop at it in the sunshine, dragging along some friends who had never hiked these parts. I love taking people to a place like this for the first time. I like to watch their faces as they marvel at the natural wonders we come across.

We started off around 0930. A little later than usual after taking a slow drive to the mountains and stopping for a tasty cooked Welsh breakfast. Our effort would take us away from Capel Curig itself and towards the green peaks that surround the outdoor pursuit town.

After only twenty minutes on the trail, we were treated to our first photo opportunity of the morning in the form of a slow-worm warming itself on the rocky path.

Neither worm or snake, the slow-worm is actually a legless lizard.

Also known as a deaf adder, blindworm and a long-cripple, we felt sorry for the little guy and his list of unfortunate names and left him to his sunbathing, continuing our ascent into the hills, under the watchful eyes of some more locals from the animal kingdom:

The terrain looks completely different outside of the summer months with the green ferns dying and turning brown against a grey sky. Today though, the scene could be mistaken for somewhere in Southeast Asia under the shadow of Moel Siabod (pronounced Mole Shabod), the mountain in the distance being hugged by a smooth, white cloud.

After losing the trail in the ferns and wandering off track a little, we heard the rumble of a jet engine and stopped in our tracks to wait for it to come into view. Fighter jets are a common occurrence around these parts as the RAF and USAF among other countries air forces, practice low-level flying through the valleys and below the mountain tops.

They often travel in two's, tipping from side to side playing chase around the natural contours of the landscape. The boom that shakes the ground when they are close is immense. So immense, that I usually stand there in awe rather than taking a photo! This time I managed to grab a quick shot of the second one as it banked through the valley.

Escaping the deep ferns we rejoined the trail that we'd lost and hiked to the summit of Crimpiau, our smallest peak of the day. From here we could pick our descent down to lake level and our approach into the forest opposite.

We would be entering the forest by the house in the centre of the image and ascending up onto the opposite hill.

Before finding a way down we bust out some snacks and my friend captured some drone footage. Without warning, as it often does in Wales, the weather changed and a cold front rolled in. We packed away the drone and the Jaffa cakes and made our way down towards the valley.

With amazing views of Llyn Crafnant in front of us as we descended, using the house as a landmark and making a bee line for it, abandoning what little of a path we were following and picking our way down the hillside.

After entering the forest we felt the clouds blow over and the heat of the sun brought out the smell of the pine trees. We quickly gained our elevation again and enjoyed the last stretch of the forest, downhill and a chance for my friend to ditch the hiking boots and go barefoot on the soft grassy floor.

Exiting the shade of the forest, and onto an open grass plateau we all took a seat on some rotten tree stumps to let our barefooted friend replace his boots. Halting the converstion, my other friend raised his finger as the sound of a woman singing came from the forest behind us. A dog walker we expected, we waited it out for them to pass us so we could continue our approach to our next peak without having a dog photo-bombing the shots.

Five minutes passed as we chatted in the sun without anyone exiting the forest. The sound of the singing was close and the trail we were waiting on is the only exit from the dense woodland. We waited some more, before giving up and heading on over to Creigiau Gleision, our next summit which is a collection of peaks running along a cliff edge overlooking the next valley and Llyn Cowlyd reservoir.

Even after weeks of summer heat, the ground up here remains boggy and waterlogged. The less trodden marshes on the peaks up here make it an ideal habitat for all sorts of alpine flowers.

The striking feature of the cliffs is a huge vein of quartz that stands out bright-white along the dark grey edge we had been following. Gold flakes are often found within quartz and there is evidence of mining and blasting from long ago in the area.

We'd taken our time around the cliff edge, taking photo's and taking it in turns to pose on top of the quartz lump, but still nobody had appeared from the forest. Dog walkers, are typically quick paced and surely they would have passed us by now. We debated heading back into the forest to see if anyone had fallen but although the forest was still in view we were now quite far away and decided against going to look for what may just have been a figure of our imagination.

We ticked off our third and final peak of the day on Craig Wen, completing the circular and rejoining the path we started on almost eight hours ago.

Riding passenger for a change, I trawled the internet on the way home for any mountain rescue reports as my conscience played with me. No reports so, as I often do after a hike, I read a bit more about the area we had just visited. Turning the radio down, I began reading out loud when I came across multiple writings about ghostly encounters on the peaks of Creigiau Gleision.

Colin Adams, an experienced mountaineer who has written guidebooks to the Welsh hills, has documented his experiences with mystery voices. He has hiked this route hundreds of times and has heard both Welsh and English voices speaking to him. Although he claims to have been spoken to many times, he has never seen anyone behind the voices.

I can't find anything about any ghosts that sing but I do wonder if our mystery warbler was Colin Adams' spirit of Creigiau Gleision?

Thanks for reading and merry Christmas!

Awesome photos. I was here on my last trip to Snowdonia and it was certainly very wet! In fact it didn't rain the entire week except when we were up on Crimpiau

Yeh that sounds about right, absolutely sodden up there most of the time.