Boxing day on the Alwen 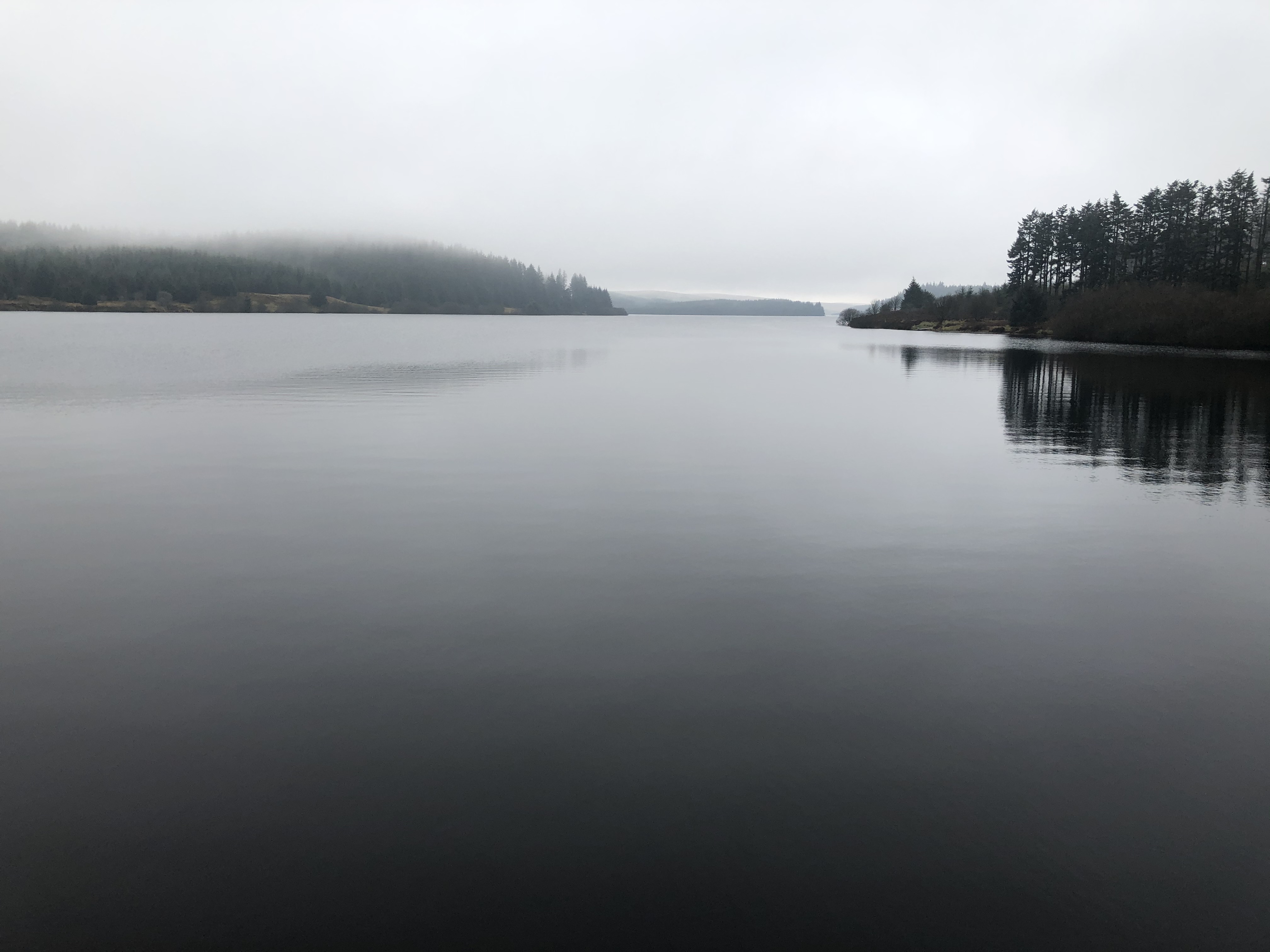 We usually attack this trail on the mountain bikes, but today, with bellies still full of Christmas nosh, we opted for a nice gentle stroll in the mist around the Alwen reservoir in Denbighshire, North Wales.

Unlike Christmas day yesterday, which was gloriously sunny all day, this morning was dark, wet and windy. We bad-mouthed YouTube for most of the drive after their recent assault on the crypto community, as the windscreen wipers struggled to keep up with the surface spray on the roads.

We arrived, surprisingly, to an empty reservoir car park. The walking routes are usually really busy on Boxing day with people often trying to gain a few days head start on their New Year resolutions. By the time we got our boots on, another two cars had arrived. We set off around the reservoir anti-clockwise gaining a little elevation as we entered part of the pine forest that surrounds the water.

Whilst concentrating on the front wheel, brakes and gears it can be easy to fly around these trails on the bike without paying any attention to the scenery other than the lake which dominates the landscape.

At a slow walking pace though, we noticed some features that had previously passed us by. We spotted the roof of a boathouse close to the waters edge and followed a 4x4 track the short distance to investigate.

We discovered the small building was the water skiing clubhouse. With nobody honing their water skiing skills on the icy cold surface today, we took the liberty of fooling around on the pontoon before continuing along the trail.

The next point of interest was the birthplace of local folk-hero Taliesin Hiraethog. A professional story teller, poet and musician known as a bard, he popularised the Welsh tradition of 'Nosweithiau Llawen' (Merry Nights), where family and neighbours would gather on winter nights in front of the fire, enjoying food and entertainment to the sweet sound of a harp.

The ruins that can be seen from the trail are all that is left of the house in which Hiraethog grew up.

The trail widened as we meandered our way through the huge piles of pine trunks, recently stacked and ready to be taken to the saw mills to begin their new lives as furniture and who knows what else.

Our previous visit along this part of the trail was in dark, dense forest. It was like walking along a new trail as the light poured onto the path from both sides, where the mature pine trees have been razed to the ground and all that remains are stumps and deep trenches from the caterpillar-tracks left by the heavy machinery in the soft, mossy ground.

As more hikers, runners and dog walkers appeared on the trails, we came across another feature that would have been otherwise bypassed on the mountain bike.

This one was the ruins of a large building set back into the forest and away from the path. The information board explained that at this location, local farmers and villagers would gather together in the summer evenings to communally undergo the tasks of clipping the wool by hand from the sheep and rolling the fleeces. Once the tasks were complete, all involved would then celebrate with a huge feast.

I think it's sad that communities like this are few and far between these days. We hardly even know what our neighbours' names are in the modern age, never mind inviting them round to help you sheer your animals!

The trees surrounding the old house must be exempt from the chainsaw and look a lot older than the ones in the forestry area. Draped in lichen and moss, they give a Blair Witch feel to already creepy part of the trail.

Leaving the old house behind and rejoining the narrow track we crossed a narrow part of the reservoir over a rickety wooden bridge. At this time of year the wood of the bridge is infested with lichen and it makes for an interesting walk through a pale green, windy passageway.

On the opposite side of the reservoir, the trail is no different as it heads back towards the car park through more forestry land.

This side was more sheltered from the wind and the surface of the water appeared as smooth as glass as we skirted the waters edge looking back to where we were hours earlier.

With our festive hike coming to an end, we still needed to cross back over to get to the car park. This is where the final point of interest of the walk appears; the dam that stops the reservoir from flowing down the valley, which the path heads over and back to the car.

The dam was built in the early 1900's to form the reservoir to supply Birkenhead, England with clean running water.

Is a Christmas hike part of your holiday plans? if so, where are you headed?

I hope you're all enjoying the holidays and have a great New Year.