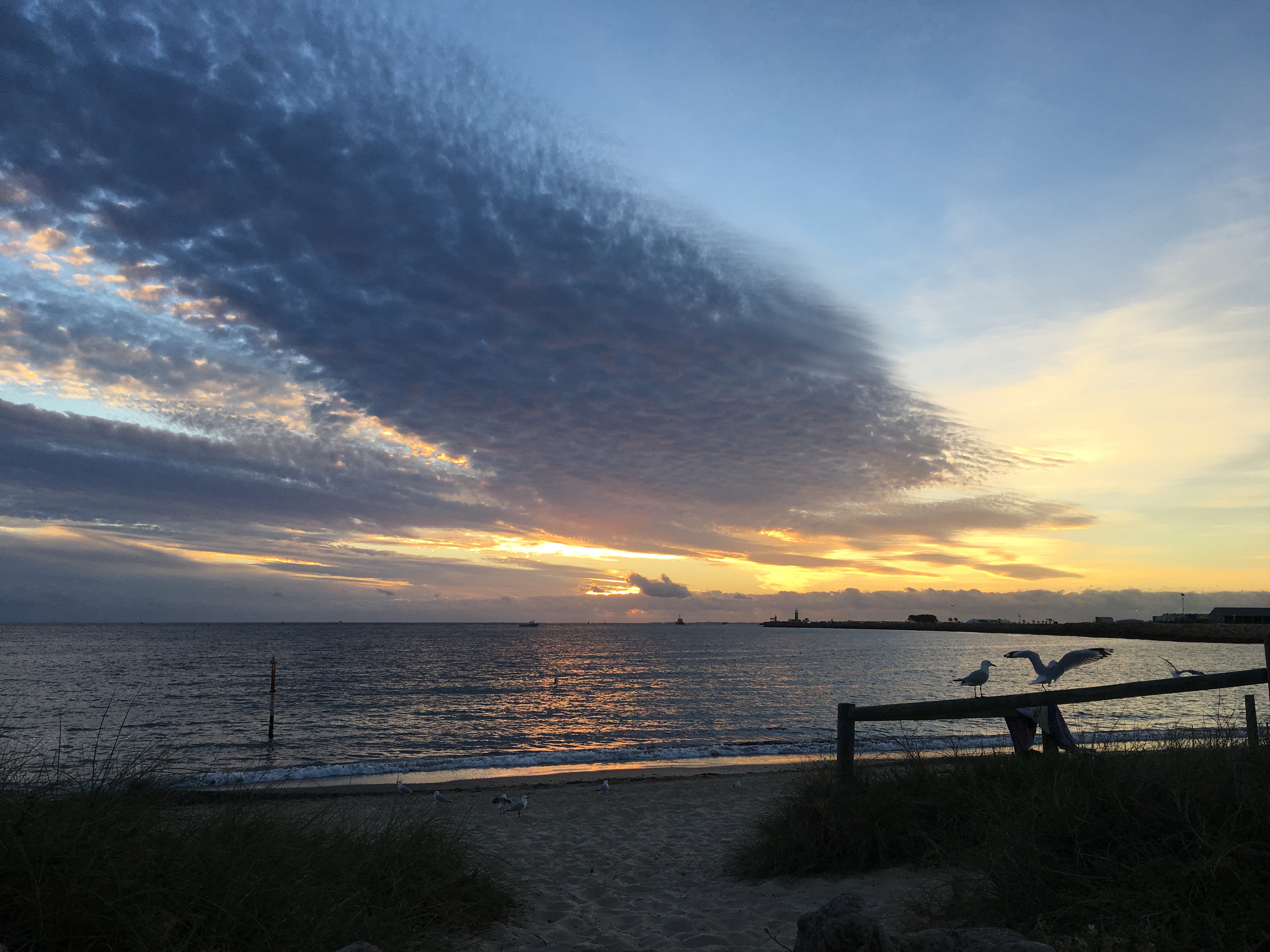 When I'm not outdoors I'm usually stuck in a factory making insulated cladding panels for use in construction. I've worked there for almost fifteen years now and it's always been the same sort of working day, not much in the way of opportunities or excitement.

So, recently when I was lucky enough to be chosen by my boss to travel to Australia to rectify a complaint we'd received, I snatched his hand off before even running it by my pregnant wife! I had a feeling she would be cool with it as she always encourages me to take the leap, also she was not too far along with her bump and besides, I could always change my mind without the opportunity going to someone else! Reservation by acceptance!

Some of the materials we had shipped to the other side of the world had arrived to the customer with small rust stains. The stains were not detected until after they had erected the building and it would be our job to clean and treat the affected areas from a cherry picker.

The site was a lithium plant a couple of hours south of Perth in a place called Kwinana. It was owned by the Australian military and we had to jump through all sorts of hoops to acquire access.

After spending the last week completing site competence tests, waivers, visa's, a working at height course and receiving our Aussie cherry picker licenses, not to mention flying to the other side of the world, we finally arrived at the site gatehouse to a very strict security guard who, without any pleasantries, proceeded to breath test the two of us. We looked at each other nervously knowing we'd probably drank too many Japanese beers in the hotel the night before.

Before we could even find out what the readings were, he checked some paperwork, looked back at us both and said,

"You guys can't do any work"

My boss stepped in and asked the reason.

"Your visa's are wrong mate. You're on visiting visa's instead of working ones"

Every part of me wanted to tear the portacabin down with excitement. I was stuck in Oz with no work to do for the next ten days! However, these were some pretty pissed off customers and it was my boss' mistake with the visa's so I reduced my sheer joy to a mere clenched fist inside my pocket.

With the threat of deportation hanging over us at the first sign of labour, we visited our would-be workplace and advised some others on how to deal with the problem and signed out with some free time to explore Perth.

My boss, Paul, owned his mistake pretty well and we took a drive down to Freemantle to grab some food and beers for our first Aussie sunset, awaiting our next orders from the UK.

We made use of the unexpected holiday and explored Perth whilst running. We'd meet for breakfast and attack a different route each morning.

A mate of mine had moved to Perth a few years ago, so that night, I got in touch with him and we spent a few hours bar hopping around the city, having a good catch up. I'd told Paul I wouldn't be running in the morning as I would probably be feeling a bit fragile.

After a good knees up around Perth I woke to the sound of the telephone in my hotel room ringing at about 0700. It was Paul.

"Get changed mate, there's been a development"

This was it, I thought. They're sending us home. As I exited the lift into the lobby, Paul's face said otherwise. Grinning from ear to ear he explained that instead of us staying in Perth for the duration twiddling our thumbs, the powers that be wanted us to fly to Sydney to visit a sister factory that had recently been established there.

We took the overnight 'red eye' flight from Perth to Sydney that night. After a five hour flight, crammed in like cattle, it became apparent why it was nicknamed 'the red eye'.

Our new digs were close to the factory, in a place called St Mary's, a couple of hours west of Sydney and right on the edge of the bush. We grabbed a quick shower and headed straight out to the factory without any sleep. If we got this out the way with we would have the remainder of our time to do what we wanted.

When the factory first began producing, some British lads from our plant emigrated to provide them with some skills and experience. One guy, Jason, who I was good friends with back home, very kindly offered to take us out around the city the following day with his wife and little boy.

After a flying visit to the factory and ticking some boxes, we caught up on some sleep and woke early to catch the train to Sydney to meet Jason and his family.

The plan was to meet outside the train station close to the famous Harbour bridge, walk over it and do the tourist thing around the opera house etc.

Jase, his wife Angela and son Morgan were great hosts and we had a good catch up over a few beers. They recommended we take a hike in the Blue Mountains as it was close to where we were staying in St Mary's.

Never one to turn down a recommendation, I was up at dawn with my hiking boots on, waiting for Paul on the benches outside the hotel. As I smoked a cigarette in a world of my own, something big moved in my peripheral vision.

They seemed really tame and bit mischievous as they didn't seem too bothered about being close to humans. I expected them to be more timid and definitely didn't expect to see them so close to the hotel car park.

We arrived at a popular hiking spot in the Blue Mountains, called Wentworth Falls. The sun had not long risen and we witnessed the blue morning mist of the Eucalyptus trees from which the mountains name hails.

The trail took us down a stone stairway cut into the side of a huge cliff face. Every so often the water that cascaded down the cliff face pooled on plateaus, filling up and cascading down again to the next one.

The scenery was stunning and like nothing I'd ever seen. The wildlife, abundant, with hundreds of different bird songs echoing out over the canopies. You can see why famous naturalist, Darwin found it an attractive place to visit.

The thought of carving out this awesome staircase with such primitive tools provoked us to take a break under a massive overhang of rock, marvelling at the waterfalls and the mist travelling in the opposite direction.

We reached the lowest point of our hike and now faced a good slog back up another more gradual trail through some dense forest.

We arrived back at the car after about three hours in the bush. I slung my jacket and rucksack onto the back seat and we headed back towards Sydney for an afternoon on Bondi beach.

We hit some heavy Sydney traffic on our way back into the city and my boss pulled the car over after seeing a sports store. He ran in to grab his dad a souvenir rugby shirt allowing me to make use of the quick stop to stretch my legs and grab a smoke. As I pulled my jacket off the back seat and shut the door, something big dropped from the roof inside of the car. I froze. Whatever it was, at least I'd locked it in. I smoked frantically, peering through the window for a any clue as to what in the hell it was.

Paul appeared and I told him in no uncertain terms I wasn't getting back into the car. He thought I was joking and swung the door open to see for himself. Whatever it was had scurried away to safety and some passing Aussies laughed as we roped them in to finding the mystery critter. We told them we'd been hiking in the mountains and they put forward the probability that we had picked up a hitch hiker in the form of a Huntsman spider.

Sure enough, after a five minute search we found a large Huntsman hiding under the rear door I had slammed shut. I'd seen videos of these things jumping so I stood at a safe distance and grabbed a quick shot.

It's hard to see the true size of it from this photo but after some gentle persuasion with my bosses wallet, its legs opened up wide and it scurried up the side of the door at speed and onto the window. Another flick with the wallet sent it onto the pavement. We thanked the Aussies and jokingly apologised for causing a scene. I can't believe that thing was with us in the car for almost two hours! It must have hitched on when we had sat down under the rocky overhang.

We spent the rest of the short drive to Bondi laughing about the spider incident and wondered if we'd see Jaws once at the beach.

My cousin is an air hostess and just happened to be stationed in Sydney so we met up with her and one of her colleagues in the beach car park.

Bondi didn't disappoint. It was exactly how I imagined. Blonde, sun-kissed people everywhere carrying boards. It was a Sunday and the beach was unusually quiet. There was some live music being played and we watched the surfers over some more Japanese lagers which we had now acquired a taste for. Alice, my cousin and her colleague James had hired some boards and offered them to us. This was after he had told me that the low flying helicopter circling the beach was a shark spotter.

Having already had a close call with the eight-legged hairy one, I didn't push my luck and politely declined.

There had been some nasty bush fires lately and a large plume of black smoke darkened the horizon, contrasting with the golden-white sand.

Twelve days we spent in Australia. What should have been almost two weeks of hard work turned out to be the chance of a lifetime to see places and things I probably wouldn't get to see until retirement. We flew home via a one day stay in Abu Dhabi and landed back in Manchester the following day to my wife and her now bigger bump!

Have you ever had a work trip that went pear shaped for the better? Let me know...

Congratulations! Your post has been selected as a daily Steemit truffle! It is listed on rank 3 of all contributions awarded today. You can find the TOP DAILY TRUFFLE PICKS HERE.