A Little Bit of Americana (with a CP Twist) 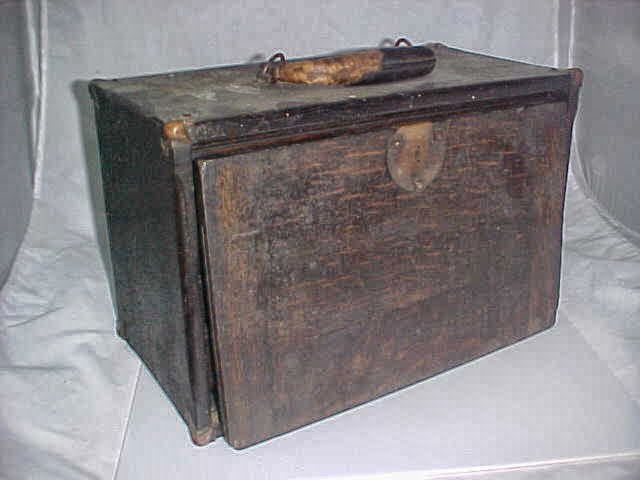 My boys great-grandfather, Luther Smith, was a railroad worker. I never had the opportunity to meet the man, but he worked on railroads in Pennsylvania and Ohio his entire life.

I have, in my position, two of his toolboxes. One of them is big, and metal, and I can barely lift it with two arms. He must have been One Big Man. It's full of tools that you might expect a railroad mechanic to have, and they're sized just as huge.

The other one is this one, with some much finer tools in it.

(in hindsight, there was no reason to put this in my light-tent, but I didn't really have anywhere else to put it)

What I really like best about this toolbox is that it contains within it the smell of the railroad. I kid you not. As soon as any of the drawers in the toolbox are opened the aroma of the railroad emanates forth. Unfortunately we do not yet have access to smellovision or aromagraphs, so my cheap photographs will need to work.

Some of the tools in this chest are obvious. Some of them I honestly have no idea what they are or what they were used for: a railroad mechanic I obviously am not.

There is some paperwork in the top drawer, too; one was just a check-in slip, but the other was a little more ominous. Luther was apparently laid off in May of 1949. It's hard to read, but the note says "Your position as ___ will be abolished and you will be carried on the furloughed list unless you exercise your seniority as provided in the Regulations." (emphasis mine)

There is another sheet in the drawer that has his response:

The sheet is empty, so Luther chose not to transfer his furlough to anyone else. He apparently had the opportunity to name someone else with less seniority to be laid off instead. He chose not to.

I don't know exactly what these would have been used for, but I tink they look neat.

So, finally, here is my CP twist (no, it's not a dance). I'm not a railroader, but I like steam locomotives (there is a pun in there, somewhere) and I really like model trains. Here is a picture of my CP HO scale engine:

I have other engines, including the Hogwart's Express, as well as a new-to-me Z-scale setup that fits on my desk! It's tiny.

All pictures in this post were taken by my crappy Sony FD Mavica camera and saved to floppy disk. The two documents are not photographs; they are scans.

(c) All images and photographs, unless otherwise specified, are created and owned by me.
(c) Victor Wiebe

I have picked your post for my daily voting initiative! Keep it up and Steem on!

Wow! That's a piece of history and impressive how solid it is. Glad I saw this on #PYPT! :)

I know, right? I have a large number of small tools that would fit perfectly into that, but I can't bring myself to break up the set that is already there. So, a decoration it remains. :)

I am a history buff and this is great to see things like this. The history of the railroad is an interesting subject to me. Thanks for sharing!

Thank you for the comment! I love the railroad, I really do. There are two volunteer steam railroads near me that I really wish I could find the time to volunteer at.

I think those are baggage tags - the brass discs - to help match bag and train.

My bad eyesight! Thought it was RRR! PRR = Penn Railroad.

or, as was with a toolbox, a tool tag. lol

That looks exactly like what it is! Awesome. Thank you!

Congratulations @rycharde, 4.71% upvote has been shared with your successful call on the post that shared by @wwwiebe!

It's so interesting to look at old things. Especially if it's part of your family history. It’s like a bridge from you to those previous generations. This is a story that you can touch and hold in your hands.

Exactly. I know a nearby Railroad museum desperately wants me to donate this, but I don't have the heart (at least not yet) to let it go outside the family.

This brought out memories of a similar tool box my father had, thanks for that :)

And yes, you should! I'm positive you'd be able to do some fantastic things with one.

It is now on my things to do when I retire list ;) Posted with ![](https://cdn.steemitimages.com/DQmbroYujK9LNd2s8zDKPUCADmseyJDuNbhwBPrrF7xM8FL/logo-comment.png)

Hi. Such a beautiful story of your grandfather. And his keepsake is a treasure to your family. How proud he must be to know his descendants are relishing something he used to make a living for his family. It's just so neat to see. I love antiques and old family treasures.

Have a blessed day, and thanks for sharing.

I'm sure he didn't mean to leave it as a keepsake, but it really has become one. Thank you very much for the nice comment!

It's the item that didn't mean to be that becomes one. When we cherish something, sometimes we are the only ones that find value one way or another in it. And it doesn't mean anything to anyone else, whether in the present or later one.

It's the items that are necessary for us in some capacity that we sometimes don't think about the time that anyone else would wnat or cherish that becomes the most valuable.

I have such an item I found too.

Amazing glimpse of a fascinating slice of history!

Thanks to @freedomring, this post has been resteemed and featured in today's edition of The Daily Sneak.

Thank you for your efforts to create quality content!

Howdy sir wwwiebe! Those are all great pictures and I love the post and that old tool box, super super cool! Z-gauge is awesome!