CREATIVE WRITING CONTEST: In English-speaking Cameroon, an NGO facilitates the legalization of marriages 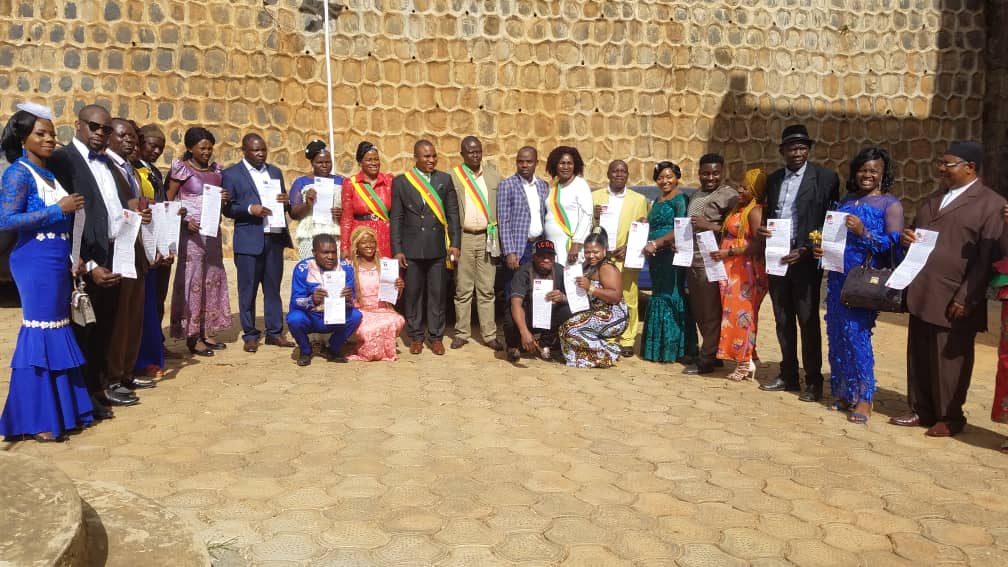 In this part of the country where an armed conflict has been raging for more than 4 years, several couples are unable to formalize their union. Through the African Institute for Economic and Social Development (INADES), collective marriages are organized in these conflict zones to allow couples living together, some for several years, to unite officially

In this hall of the city of Bamenda, the mayor of the municipality of Bafut celebrates the wedding ceremony of 14 couples. This scene takes place under the gaze of family members singing to encourage the couples to get married. Among them, Ambe Fidelis, for 3 years now, he has been seeking to formalize his marriage in front of the mayor, he said. But in his locality of Bafut, one of the epicenter of the armed struggle, the council is closed, its services moved to Bamenda. When the African Institute for Economic and Social Development heard from INADES, set up this collective marriage program, his couple subscribed to it. For his wife Colette, this is a dream come true. “It was an opportunity for me to get a security certificate. I am so happy today, me and my husband,” she said.

Like her, several people living as a couple in the English-speaking regions of Cameroon have not been able to formalize their marriage. According to national statistics, nearly 90% of Cameroonians do not have a marriage contract. The reasons vary from region to region. but in the English-speaking area, it is today more accentuated by the ongoing armed conflict according to INADES. According to Claude Sango, project manager, "we have so far formalized the Union of 350 couples. Add to this, another project on obtaining birth and death certificates, the project will continue," he said. .

According to Ngwakongho Lawrence, mayor of the municipality of Bafut, these collective marriages are part of the social vision of the council, namely to unite couples who have lived in free union for a long time and this to ensure a certain security for their kids. He added that “No matter how many years a couple lives together, if you don't have a marriage certificate like the one we gave to couples today, you are not married. other advantages! ".

Collective weddings have been organized in Cameroon since 2007.

Woow that is the mayor of bafut in black suit with the cameroon flag,I know him well . nice write up bro thanks for the update about collective wedding here in cameroon.i didn't know

Thanks for the enlightenment on collective marriage. So interesting