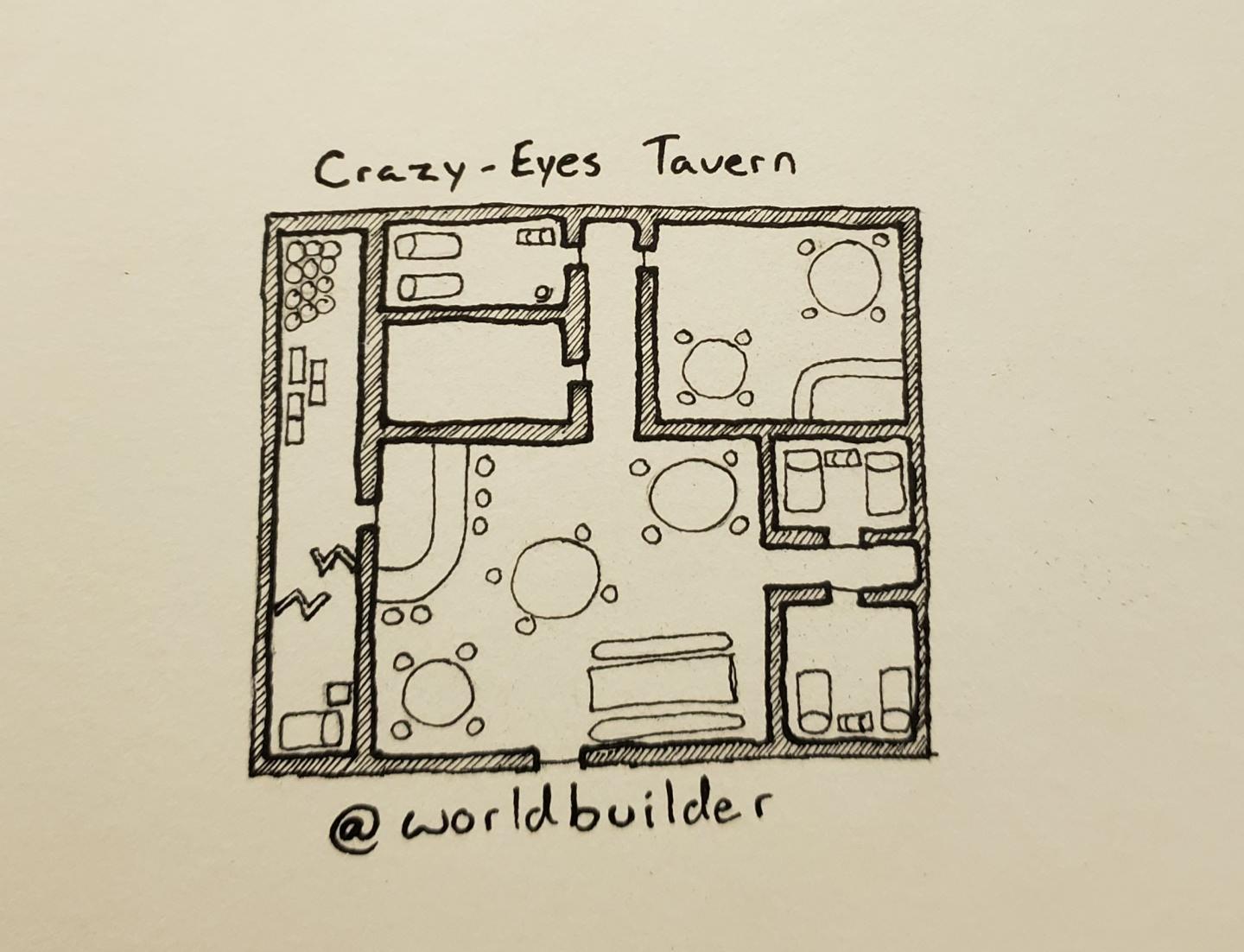 Crazy-Eyes is a tavern in the Neti port city of Aluru that services the darker elements of the city. Cutthroats and thieves are the dominant patrons of this dark, smelly hole in the wall. Many adventurers end up on their asses outside the doors of the bar. Which is preferable for the tavernkeeper, a large and imposing female Orc known only as Crazy-Eyes. Upon meeting the strong woman, the nickname becomes apparent. Her eyes had but one color to it, a deep purple. There was no sign of a pupil nor any way to tell when she was looking you in the eye. But she most definitely could see, snatching coins thrown at her out of the air, and sliding mugs of ale across the bar with the precision only a master of their craft can pull off.

The tavern hosts many backdoor activities. From poker to knucklebones, gambling was allowed in the backrooms of the building, although the city guard would prefer they wouldn't and regularly enter the establishment to break up the gambling rings. There is also a fence that can be found at any time within the Crazy-Eyes Tavern. Someone who can pay you for those earrings you just stole.

The Crazy-Eyes Tavern is an excellent location for the less savory party members to go to in order to find out secrets from the underbelly of the city without spooking the citizens at the higher class establishments like the Crooked Noose or Five Fists. But be careful when entering Crazy-Eyes because you do not want to cross the wrong patron.

Just a small description of a tavern I hope to feature in my fantasy world. I should work to develop Crazy-Eyes the person better as well. I like the idea of idiotic customers treating an orc as if it's blind when it can probably see better than you and I.

You have used the Hashtag #[CC] and can now reward 134.0 comments under your post with one CC.

This is a brilliant use of the prompt! I have got to remember to try something like this myself! Very well done. I love the image I get of Crazy-Eyes and her establishment.

It was your using the prompts as character names that gave me the idea to use it for buildings and the likes lol.

hahaha That's freaking awesome. I'm glad that my NPC Generator idea prompted you to be inspired to make a map as the challenge. It's an avenue I would've never considered and definitely opens up some really neat new options of - like you said - items, etc. Very rad!

Love your descriptions and World Building - you're a master!
Have you read "Thick as Thieves" by Ken Lizzi? It opens with a retired soldier working as a bouncer for a tavern similar to this one. Great novel, great author. You'll be publishing soon I hope? If I miss the news when it happens, be sure to ping me!

No publishing for me in the near future, I've barely just begun hehe. I haven't read Thick as Thieves before, but will definitely be checking it out. Not sure if it shares the same tones as Terry Pratchett, but my favorite characters from his books were always the Night Watch guards. Thank you for the kind words.

Are you sure you are world building or being word builder? Such an awesome way of interpreting the prompt!

I often struggle with names, so having a prompt do it for me is awesome! Thanks!

I believe the prompts help every one of us (freewriters). It's easier to create something from something than from nothing. Welcome :)

Nice background to a location and the owner. I think you worked the prompt pretty good, I love the thought of the purple eyes no pupils that kind of make her seem blind.

Very well written @worldbuilder, you made this tavern come alive and it's hostess and what goes on there, I am glad you continue to build your fantasy world, it's awesome.

It has therefore got a manual 100% upvote from @thisisawesome, for the Awesome Daily Upvotes in category Freewrite, I give out 1 such vote in that category per day, plus 4 more in other categories, and your post will also be featured in today's Awesome Daily report for more visibility.