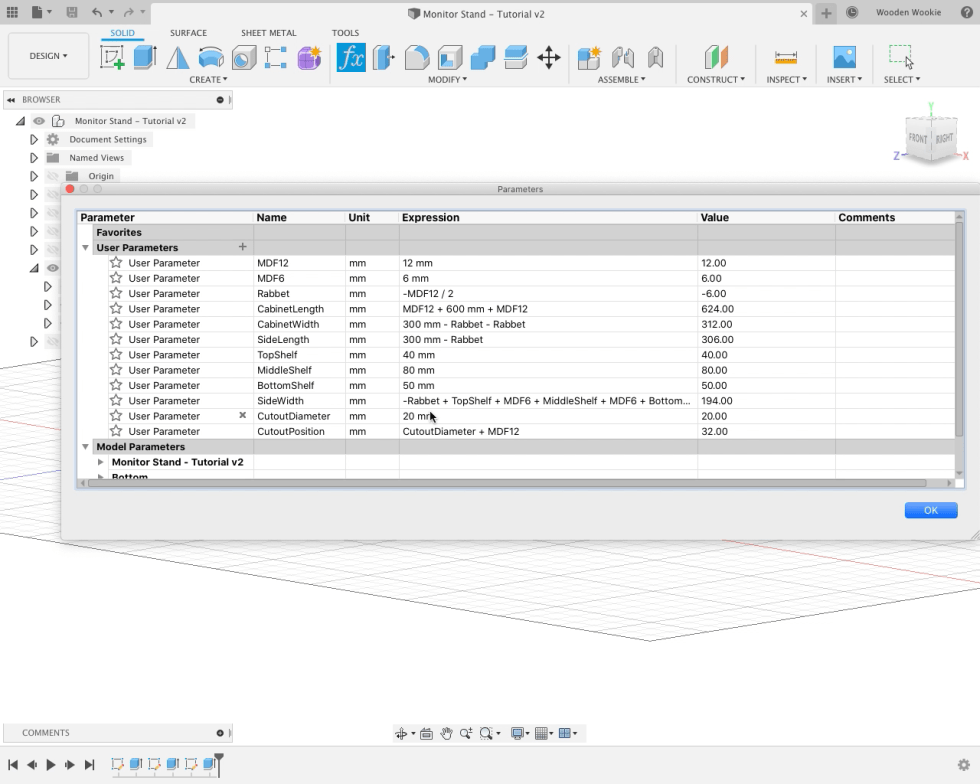 I’m not going to lie to you, I will always use technology over old school every time. It’s not that I don’t like pen and paper. It’s a great medium but I find it limited due to physical constraints that don’t exist in the digital world. I've tried to make this post platform agnostic. If you're using Fusion 360, SketchUp, AutoCAD, or pen and paper then this post is still going to work for you.

On a recent project I kind of ballsed things up by working with wrong thinking. The outside dimensions were right but it ended up too small because I forgot about the width of the timber.

I repurposed that project as a charging station. I then redesigned the project in Fusion 360 using an inside out method. Inside out design is simple. Say you have an object that you want to contain. The dimensions of that object become the basis of the entire project. My project was a "Monitor Stand" that would house my laptop and hard drives as well as my WiFi. This is an effort to save space on the desk and tidy things up a bit. Everything I’m trying to hide away has a given size. By measuring them and adding them together I got a size that would work - 600mm x 300mm. This became my internal measurements which I would base everything else at. This next part now is more suited to two apps Fusion 360 and pen and paper. The reason for this is because it requires calculations to determine other parameters.

Parametric design is not only for Fusion 360

So the above measurements become my base numbers. Because I’m using Fusion 360 I would create a couple of parameters. So I created “Internal Length” and “Internal Width” with values of 600 and 300.

There are other base parameters as well. MDF12 and MDF6 refers to the dimensions of the wood I was using. I like to name these according to the type of wood. MDF refers to the fact I’m using MDF or Custom Board for this project and the 12 and 6 refer to the thickness.

This is where Fusion 360 gets cool and rules it over all other apps except for pen and paper. I needed a parameter to define the depth of the rabbet. That was this:

I created a negative value because a rabbet is a cut so…
Already you can see why Fusion 360 is a great option for designing. This negative value creates a rabbet exactly half the thickness of the MDF I’m working with. Why not use -MDF6? Because if I change MDF12 to say MDF18 then the size of the rabbet would be out.
So now I have all the information I need to set the dimensions of this project. This is where Fusion 360 and even pen and paper rule. Check out the parameters I set:

You might notice that a couple times I used “- Rabbet” in the calculations. The reason for that is that I needed positive values and a negative minus a negative equals a positive.

But as you can see these parameters feed off each other in some way. I could change MDF12 to “Ply18 = 18” and Fusion 360 would change that to Ply18 with a measurement of 18mm. The whole drawing changes with it.

The parametric approach of Fusion 360 works well for all forms of design. It allows you to ensure that what you are designing is going to be in proportion no matter what medium you use. If you’re using SketchUp then there’s no ability to store these calculations. You’d have to use a pen and paper or a spreadsheet to do the same thing. No matter what method you choose to design, I recommend this style of approach. It makes changing things down the line easier.

The big question now is which method is better? Should I learn SketchUp or Fusion 360 or should I learn to do it on paper?

I rule out paper but that’s because it’s kind of expensive if you add it all up. It also requires more space than I have because of the need for a drawing desk. This section now becomes a duel between Fusion 360 and SketchUp.

SketchUp is a pretty great tool. To get the best out of this app if you’re a beginner then you need to check out The SketchUp Essentials. I learned 3D design using this method and found it pretty cool, only the more I used SketchUp the more I hated it. I found it’s facial editing to be a pain in the butt because everything was a separate face including the edges. This got frustrating when I thought I had grabbed an entire face only to have grabbed an edge. This made everything warped and twisted. I hammered the hell out of Command Z in SketchUp. Not only that but once you’ve made everything it can be difficult to change everything later on. It’s not undoable. It’s not easy and if you’ve not followed good standards then it can be a matter of starting all over again. The worst thing about SketchUp is that to use the free client you have two options. Either use the web client or use an old version of the desktop client. So you’ve either got to use unsupported software or have a constant connection to the internet. This can be annoying, although I must say our internet is pretty awesome so it’s not an issue for me.

This leads me to Fusion 360. Fusion 360 is very much a real world editor. By this, I mean that instead of creating faces it creates bodies and you use those bodies desired. But it’s the parametric editing that makes Fusion 360 the best for woodworkers. Use the parameters I've listed above in Fusion 360 now if you want. It’s now a matter of creating components and sketches and you’ve got a model. This model will take me about 50 minutes to create from scratch and that’s including the rabbets and parts.

You don't have to be a pro user. Download Fusion 360. When asked for a licence, run through the questions to see if you’re eligible for a free licence. Make sure you say that you’re a hobbiest to get Fusion 360 for free. If you are going to make money from plans, etc. then you buy a proper licence because it’s only fair. Fusion 360 is pretty easy to learn but it will need you to rethink how you do things. One you learn you’ll wonder why you did it any other way.

I’ve come a long way since I started woodworking and much of what I’ve built has been reverse engineered to suit my needs. Before Fusion 360 I worked off quick designs on paper but since then I design all my stuff in Fusion now. I even have a plan for a helicopter that I designed from scratch. Fusion 360 makes this so easy.

I’ve described nothing that you can’t do in other apps such as SketchUp, AutoCAD, or good old pen and paper. Whatever method you choose you need to understand if you are designing for an area, or to house something.

You should aim to start designing if you want to kick off your skills as a wood worker. Projects found on the internet are a great place to start. But there’s nothing quite like designing something yourself. Whether you use use CAD or pen and paper do give it a go. Remember to research though especially if you are designing furniture. This is because you need to factor in forces acting on that furniture for it to be safe.

I've also worked with Sketchup and I remember this problem all too well... I love the precision of AutoCAD but as an interior design student, I found Revit was my all-time favourite.

I've never really done interior design although I can see how it would be a good skill to have in designing an efficient workshop.

Fusion 360 is more for product development. It's a baby version of AutoCAD but its approach is much cleaner and nicer. Parametric editing is extremely powerful and as flexible as you need it to be.