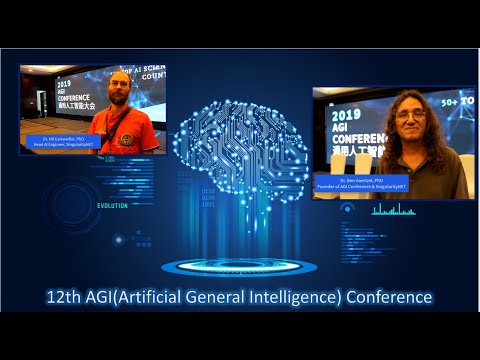 Below is the video's script.

Hello and welcome to my channel, Hardware.ai.
This week I went to 12th AGI Conference here in Shenzhen, China. In this video I would like to make a quick summary of the conference content and introduce viewers to OpenCog, a framework for integrated Artificial Intelligence & Artificial General Intelligence (AGI).

AGI stands for Artificial General Intelligence and is defined as a program that is as smart as a human across the board—a machine that can perform any intellectual task that a human being can. It is different from ANI(Artificial Narrow Intelligence), which is specializes in one area. As of 2019, we can see the examples of ANI almost in every field - self-driving cars, recommendation algorithms for YouTube and news feeds, speech recognition and synthesis, etc. The hottest algorithm for the five years or so was various flavors of deep neural networks, which significantly improved the performance of ANI across different applications.

Here are the key take-aways from the conference:
1)Deep neural networks are the local minimum. Despite they are powerful, but also quite inefficient and don’t generalize too well. If we had unlimited compute power, deep neural networks could in theory reach human-level intelligence, since neural networks are universal function approximators. But since we don’t have unlimited compute power, neural networks (sub-symbolic AI) might need to be combined with a symbolic system, which will provide top-level reasoning and coordination. Think about it like reflexes and conscious thought process in humans.
2)There are AGI optimists and AGI pessimists, in relation to time needed to reach human-level intelligence in computers. According to the optimistic estimations, we might see some forms of systems that exhibit logical behavior and reasoning, albeit limited, within next 5 years. And full blown AGI systems might be 10-20 years away. It’s hard to predict the future, but seeing how Google acquired DeepMind and Microsoft recently invested $1 billion in OpenAI, it seems the general consensus in the industry that it’s at least within my generation lifetime.
3)For the next thought, let’s listen to Dr. Goertzel as he explains that there are many paths that can take us to creating AGI system.
Out of those different paths to AGI, Dr. Goertzel was talking about, a few were discussed in presentations during the conference. There was presentation by Professor Yi Zeng, who is developing brain-inspired intelligent systems, Harri Valpola from Finland, whose Curious AI is using Unsupervised learning approach to make AI systems generalize and reason better and a presentation from Hugo Latapie, CTO NDS Americas, now a part of Cisco, where they use NARS(Non Axiomatic Reasoning System), combined with Deep Learning for various computer vision and environment monitoring applications.

Dr. Goertzel mentioned OpenCog, which is an open-source framework for integrated Artificial Intelligence & Artificial General Intelligence (AGI). It combines a (hyper-)graph database, which is used for representing knowledge and algorithms, PLN, a probabilistic reasoning and inference system, Attention Allocation mechanism and other elements. For a top-level overview of OpenCog, let’s listen to Dr. Geisweiller, who develops PLN.

Personally I very much much like this project, since it might be the only open-source platform for developing AGI out there. OpenAI has recently shifted towards commercial applications of the technology. And DeepMind… Well, it’s division of Google.

If you are interested in developing intelligent systems and robots, I encourage you to have a look at OpenCog Github. It’s a research project and work in progress, as they state in project’s Readme file. It was mentioned during the conference, the OpenCog team would welcome the contributors and people who would like to use OpenCog for building practical applications. I myself will have a good look at the chatbot and conversation elements of OpenCog and try to incorporate them into one of my future projects.
It is truly exciting times to be alive and to be developing intelligent systems. We of course, must exercise caution and make sure the things(?) we build are for the good of humanity. Until the next time!