ABZU: One of the free games from Playstation this month

This month Sony has a massive attempt at marketing their VR headsets for PS4 disguised as giving away games to people in order to encourage them to stay home during Covid. I like free stuff but since the headset sales were lower than expected it seems a little convenient that half of the free games require the headset.

Some of the games don't require the VR headset though, and ABZU is one of them

This game isn't so much a game as it is an artistic experience in that as far as I could tell you can't die or lose a life and the various stages consist of solving some rather simple puzzles or jut exploring the beautiful underwater areas you find yourself in.

I like this sort of game from time to time and enjoyed the 2 hours or so that it takes to complete the game. Well, I say "complete" in that I made it to the end. Apparently there are a ton of achievements that I did not complete because according to my PS4 interface, I have only completed 5% of the game. 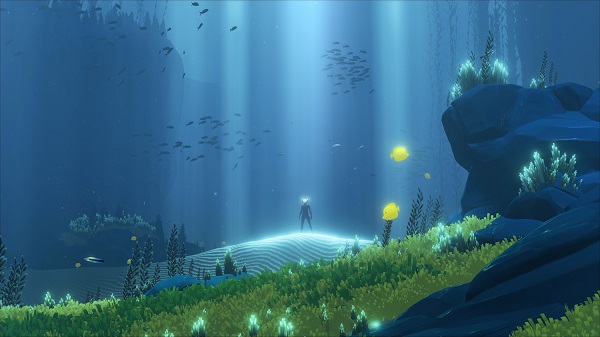 The game is gorgeous and the music is ominous and changes just enough to keep each area feeling new (except for one area.) Also, progression is intuitive enough that basically anyone can finish this game in a short time and enjoy the scenery, but your exploration opportunities seem to be pretty widespread although I did not take advantage of this because the optional unlocks seemed to consist of simply finding new species of underwater life and interacting with them or even riding them.

There is no spoken dialogue, no words written on screen, no indication of what you are, who you are, where you are, why you are there, or what your objective is. This is all left up to the interpretation of the player and personally, I quite enjoy mysterious games like this provided it isn't so cryptic that you don't know where to go next. There aren't any enemies in a traditional sense, but there are some objects that don't seem to be friendly and are perhaps otherworldly that are hostile, but they don't kill you as far as I know and neither does anything else. I tried to get killed too and it just couldn't happen. The encounters with the "evil objects" mixes things up a bit though, and creates an ominous tension that breaks up the wonderment of the other areas.

When I was playing this game I was thinking to myself "This feels an awful lot like an underwater version of Journey" only to later discover that many of the same people worked on both projects including Matt Nava who was the director of both games. Apparently, the game was inspired by Nava's love for scuba diving.

ABZU isn't really a game but more of an experience and once you get past the camera controls and figure that out, it really is a nice little therapeutic break from whatever difficult game you might be working on concurrently. The fact that this game is currently free for anyone with a PS4 or PS5 regardless of whether or not you are a Playstation Plus member means that there is really no reason to not try it.

Go have a look-see!

Man, I wish I didn't get motion sick from VR headsets. I feel like stuff like this would be a fun way to chill out for a few hours if I could use one. Maybe someday my body will stop being such a pussy.

i was intrigued when I saw that the VR headset existed then I saw the price tag of near $300 just for the headset. I am not sure but I think a PS4 bundle costs less than this. I don't know how well the VR works but the only time I used a VR headset that was pretty damn realistic, it was a lot more expensive than this. I don' t think it has sold very well but again, I don't really know.