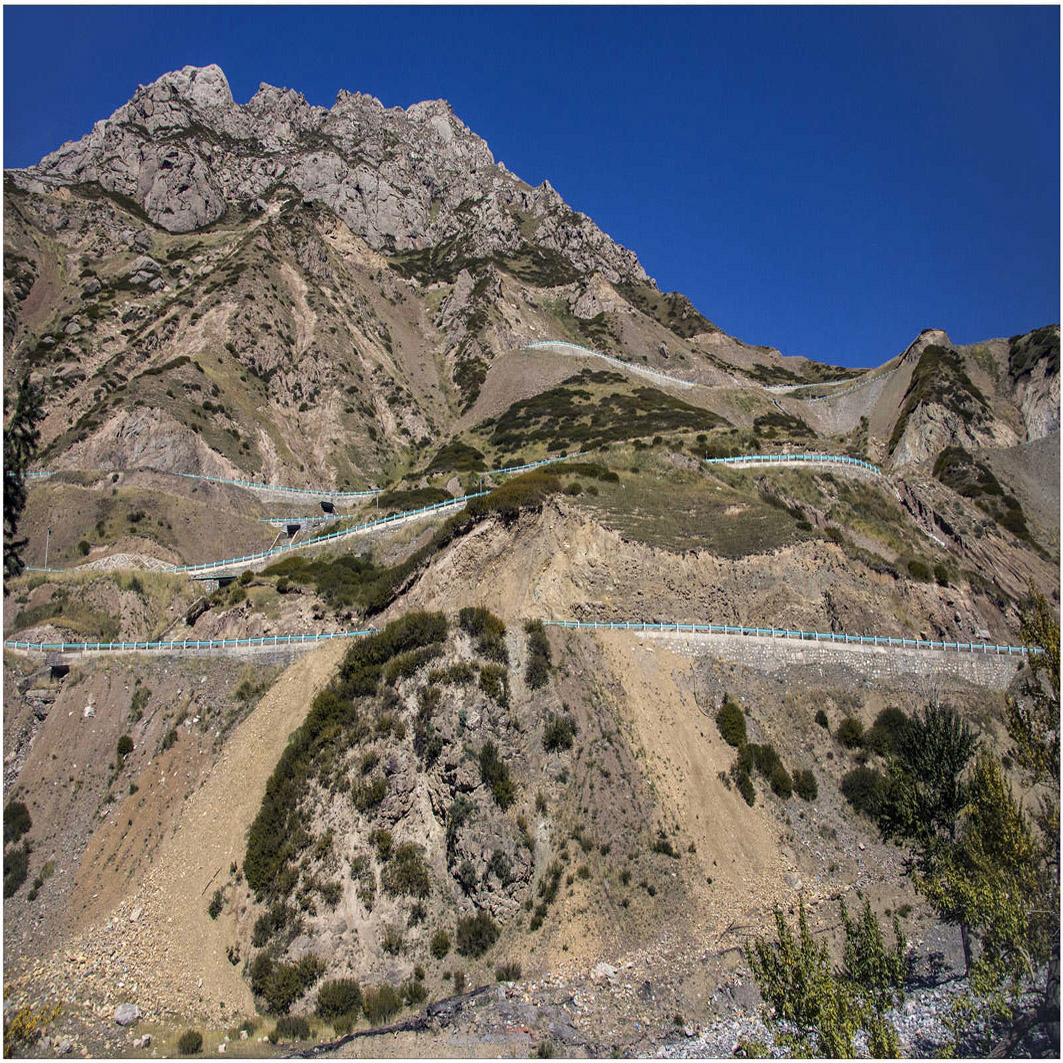 At the southern end of the road, people will also enjoy the magnificent kiziliya mountain landscape, where the red mountains and stone forests are spectacular.Not only that, in its nearby tianshan mountain mysterious grand canyon scenic area, also with winding deep breathtaking shock visitors.
In addition, the cave "ai grottoes", carved in the tang dynasty,

with exquisite frescoes, have been found in the valley, which has become an authoritative location for outdoor photography.
The kuqa river is always on the side of the road, and when the road passes through the "fire zone" at the southern foot of the tianshan mountain,

covering them with a golden hue.Shepherds fence their flocks with stone and wood fences, light firewood in their yurts, and the smoke slowly rises...This idyll of the plateau always comes into view casually along the way, filling the mind with poetry.

At the same time, you have to hold your breath for the road.Roadside cliffs in a large part of the formation and the ground not less than 90 degrees of the slope, such as the knife split general, relative height difference in more than 100 meters.It is folded into the dragon pool waterfall suspended in the mountainside, emerald green, the size of the water bird groups of the dragon pool, hidden in the middle of the road at an altitude of more than 2,000 meters in the tianshan hinterland.

Merger of atlas
Combined atlas (4 copies)
Along the way, people will also see the bayanbulak grassland, the second largest grassland in China. It is covered with green grass, wild flowers, smoke from yurts and lakes where large Numbers of swans live every year.
In addition, the narathi grassland, the jolma scenic area, the roads of daban, the snowy peaks of the mountains, the floating clouds in the mountains, and the highest tunnel in the country will make this road trip extraordinary.

One third of the road is a cliff, one fifth of the lot is in the mountain permafrost, across the tianshan mountain nearly ten major rivers, over the snow four ice daban, its driving difficulty can be imagined.But the scenery along the way can only be described as magical, from the location of the ancient kuqa kingdom kuqa to the northeast along the national highway 217 forward, the road began to peel away its layers of mystery.

Along the way, you can enjoy the fiery and dry kezliya mountain scenery, the mysterious and precipitous canyon scenery, the dense vegetation and nomadic customs in the hinterland of tianshan mountain and the vast grassland scenery and so on.
Duku highway through the scenic area (from south to north) kiziliya mountain landscape, tianshan mysterious grand canyon, the size of the dragon pool, tieli buy titidaban, bayanbulak prairie, narati,

jirma revolutionary martyrs cemetery.[1]
Travel time
The highway is open to traffic from June to October, and the best time to travel is in July and August.This road is exceptionally beautiful in summer.
It is not recommended to walk in winter, because of deep snow on the highway in winter, avalanches may occur at any time, especially to climb over two dashan.

Road information
Due to the special region, traffic control is implemented in winter from the end of September to may of the following year
, due to the steep slope of mountainous roads, more than seven passenger cars, traction semitrailer, more than 5t freight vehicles and dangerous chemicals transport vehicles are prohibited to pass.

It is reported that after the transformation into a secondary highway (that car can also go), with the completion of the closure of seven months of construction, xinjiang's second tianshan highway - the road has been restored to open to traffic, convenient for the traffic and tourists in the northern and southern xinjiang.On this road, visitors can enjoy the wonderful scenery of five miles of different scenery and ten miles of different days.
The accommodation problem
You can stop at bayanbulak or narathi along the way.