Those days at school... 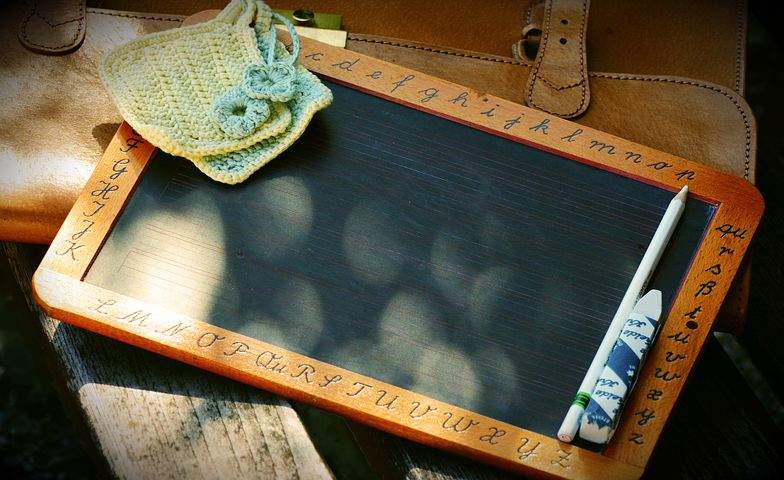 Do you remember it? My first day at school was at kindergarten and I have no idea how that felt. I doubt I cried my eyes off. My mother was not a kind person. I vaguely remember us children walk in a circle, singing a song about a helicopter while circling one hand above our head. Might be this didn't happen at the first kindergarten but the second.

3-4 years old.
We moved. My mother worked so my father could study.
I went to a new kindergarten. The first day? I can not remember it only that it was a very long way walking from home. A way I walked alone. My mother did not take me over there or picked me up, neither did my father.
I think I liked that teacher. I remember the school milk and the blue bekers and the small sinks. In the afternoon the teacher told us a story while we children laid on a mat and fell asleep.
During the morning break, the teacher had a special task. She had three sick children in her class. I was one of them. She gave us our meds, treated our skin with a special cream and cared about us.

What we used for writing. And of course the teachers blackboard.

Five years old...
Time for the next school. I was one of the youngest children. The normal age was 6 years old. Children born after October 1st were the late students and 7 years old.
The first day at school was chaotic. There were two schools new build in the new build neighborhood where we lived. (No roads yet, and no shops.)
A catholic school and Reformed one were attached to each other. The schools shared some rooms like the auditorium.
My school accepted too many children. There we all stood in the classroom for the first grade. A part had to leave and was sent to the auditorium. I was one of them. It meant two years of stress with an old fashioned nasty teacher. I suffered from nosebleed and spent a lot of time on the floor trying to stop it. The school had its own orchestra, chorus and the best performances (Christmas included) I saw in my entire life.

At the time I was at school it was normal to beat students, let them stay in the corner and punish them by writing down 1000 times "I am not allowed to speak" or whatever they wanted you to write down. The building was new but the school was old fashioned in every way and many who hear how we were drilled can hardly believe it was normal at our school. Kind teachers were sacked.

_We changed fast from ink to pencil and if you deserved it the school rewarded you with a fountain pen. The school ag you see I had too. Real leather. It wasn't new it belonged to my granddad.__

11 years old...
Next school. One in the city and I had to go over by bike. The plan was I would go with some other children who knew the way. It was too late because my mother kept me busy. I tried to find a way to the school on my own but could not. I went back home. A furious mother took me by car and that was my first day at a new school: arriving too late at the auditorium, crying and totally upset. I have no idea how I got back home. I liked the school, the freedom and most teachers were kind.

12 years old...
Another first school day at a different school. Why? My parents divorced and we moved.
The first school day? I was wearing a white jeans suit and felt terrible unhappy. For sure not my choice of clothes. The principal was a nasty old man who knew every student by name from day number one. I guess he studied the photos you had to give as you subscribed. The school and strict rules didn't bother me. The hell was at home. This school was walking distance from home. I graduated suffering from several autoimmune diseases, with an infected skin while wearing sunglasses. Some teachers were kind, others mean and racists and one teacher was a dirty old man crashing boys and girls. It was an old fashioned school which means this behavior was accepted but the great sport teacher was sacked for having an affair.

14 years old...
I moved again and again I went to a new school. Catholic this time. "You will have a hard time here", the principal said, "the people here do not like people who speak Dutch" (ABN). I thought he was kidding but he was not. A part of the teachers was mean and showed their hate.

Right after I graduated for the second time I ended in hospital. I studied. Mainly home studying and traveling through the country to make and pass my exams. I always liked studying. I was flexible and if my job brought me to the next study or profession I went for that. I paid it myself, did it next to working and being a single mom of 5 children and 11 foster children. Was it worth it? No, it was not. I have 14 professions, studied the biggest part of my life but it didn't bring me what I need most.

This is my entry to @steemitblog's 100 DAYS OF STEEM : Day 4 - Weekly Content Challenge
Theme: Memories of my School Days
Rules:
write a post, drop a link to your post in the comments, use the tag #weeklychallenge01

All photos can be found on pixabay.com. The photos I had about my childhood and school period are thrown away.

It's a good memory, thank you for participating here. I hope you will get a chance of winning this.

I don't know of it is a good memory. School was not great but home was worse. I think the kindergarten was and some teachers. 💕

Those days... I still remember those days like you do.

You too? Great to hear I am not the only one. Enjoy yoir day 💕

You have been curated on behalf of Inner Blocks: a community encouraging first hand content, with each individual living their best life, and being responsible for their own well being. #innerblocks Check it out at @innerblocks for the latest information and community updates, or to show your support via delegation.

Thank you so much. I appreciate it. Happy day 💕

Thank you for taking part in the 100 Days of Steem Weekly Content Challenge.