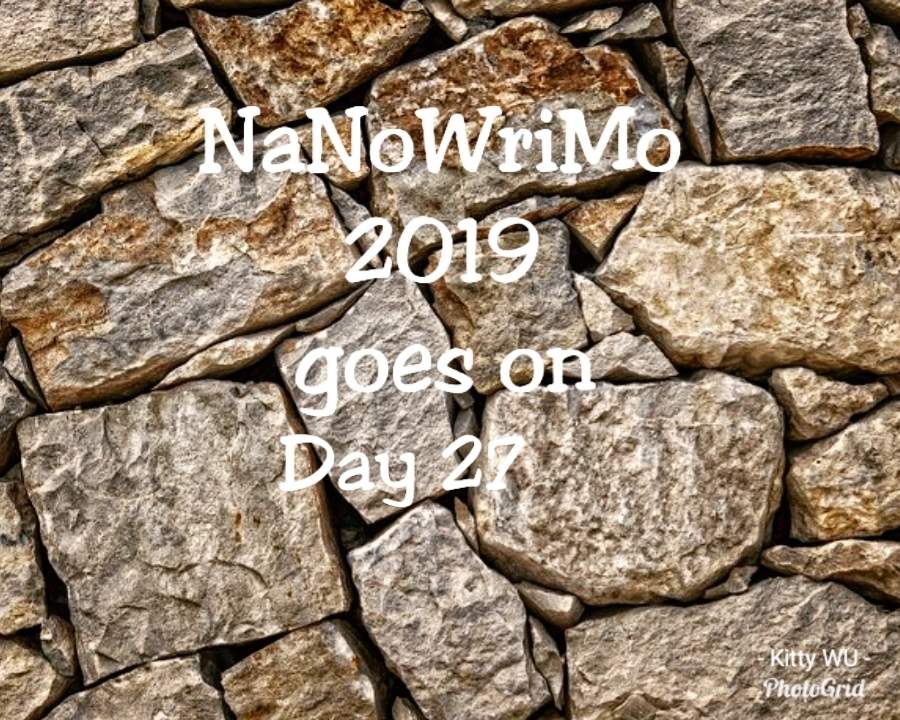 I still work on my tale.

For me, NaNoWriMo (the National Novel Writing Month) goes on and I am not the only one. More (free)writers keep writing. Some for minutes, others write 30 minutes or 500 words. If I ever publish my only option is via the Netherlands. This means I need to translate everything I wrote. Who knows I will be stupid enough to do that. A completely different book might come out of it.

The main characters are:

The last man on earth left with his firstborns and some of the first living to an underground world full of water. They end in an ocean. To escape from the fire they made the ship sunk.

The ghost invests a lot of time in the newborns who are left behind. As soon as each of them opened its eyes it is time to leave.

Was it a dream?

Did the inventor suffer from nightmares, visions or was he losing his mind from the moment on he fell into the ravine? It is hard to tell. The ghost told him several times he was a fruitcake, idiot, fool, a nutty professor.
The inventor had a past. Although it was long ago it was what had made him into the person he was now.
He heard voices. At times they were advising or angry. He thought he heard Cat and even spoke to his mother.

The creator waited for the giant to come back for him. Help him off the island. As nothing happened he started walking in circles it always helped him think. Discovering the island was not such a bad idea. It is pointless to pace on the same spot if you have room, an island for yourself.
He kept the sea at his right and walked along the shore. He felt fine. His mind was set at the peace and the only sound he heard was what the sea brought him.
The island was, as far as he could look, flat a place with sand only. No trees or caves or a place to hide. The temperature was the same as in his world and he felt comfortable.

"The boys could live here easily as long as they stay out of the water", he thought. "They might like it here just like the first living."

He smiled at the idea. It wouldn't be bad to stay here. No ghost, no misery, no need for something better and it was a different world. He kept walking, looked at the sea, its crystal clear water and forgot about his worries, his sons and... his promise to the first living.

The ghost and his sons rebuilt the city.

Finally, its dream, the goals set came true.
At first, a safe place for the boys was built. It was close to where its residence arose. There is not more I can tell you about it because it is a secret place.

Thank you for the update. 💕

Pretty amazing that you have over 3 million cc Tokens! They are very generous!

I don't have/own them, they are not mine. I am not allowed to use them so I guess I am one of the banks of saving. Noticed today the value is getting less. Not enough customers? 🤔

No. That is how the market works. Crypto tokens are very volitile and go up and down with each purchase/sale.

@melinda010100 I hope so otherwise the 40 needed will be 80 soon. Thanks for explaining. Happy day. 💕Posted with ![](https://cdn.steemitimages.com/DQmbroYujK9LNd2s8zDKPUCADmseyJDuNbhwBPrrF7xM8FL/logo-comment.png)

Thank you for the upvote. 💕

Thank you for stopping by. I wish the app would be a bit tbetter readable plus I knew how to find the newest posts if I follow a certain tag. Happy day. 💕

Well Kitty, you’re one of a kind. You’re always writing about your lack of energy yet you seem to have more than the rest of us put together. Keep on keeping on!

It’s the Wednesday prompt delivery team here with the challenge for today:
https://goldvoice.club/steem/@mariannewest/day-775-5-minute-freewrite-wednesday-prompt-leering

I have one it is 6 pm and bedtime for me. I had a hard time to stay awake since noon. Tomorrow I have a look at the prompt. Thanks for the delivery again. 💕

Wow - you have a ton of tokens!!
And why couldn't you publish in English? There are so many ways of self-publishing and you can for sure do it in English.

@mariannewest I am.the bank of saving. The tokens are not mine only the 1000which I bought or collect. I am not allowed to do.anything with it.

I cannot self publish via Amazon and in the Netherlands is difficult too. Plus I doubt my English is good enough. I will first see to finish this story. I write till it ended. Thanks for your comment. ❤️Posted with ![](https://cdn.steemitimages.com/DQmbroYujK9LNd2s8zDKPUCADmseyJDuNbhwBPrrF7xM8FL/logo-comment.png)

Keep on writing! Thank you for being a ccc member. We gave you an upvote. @team-ccc