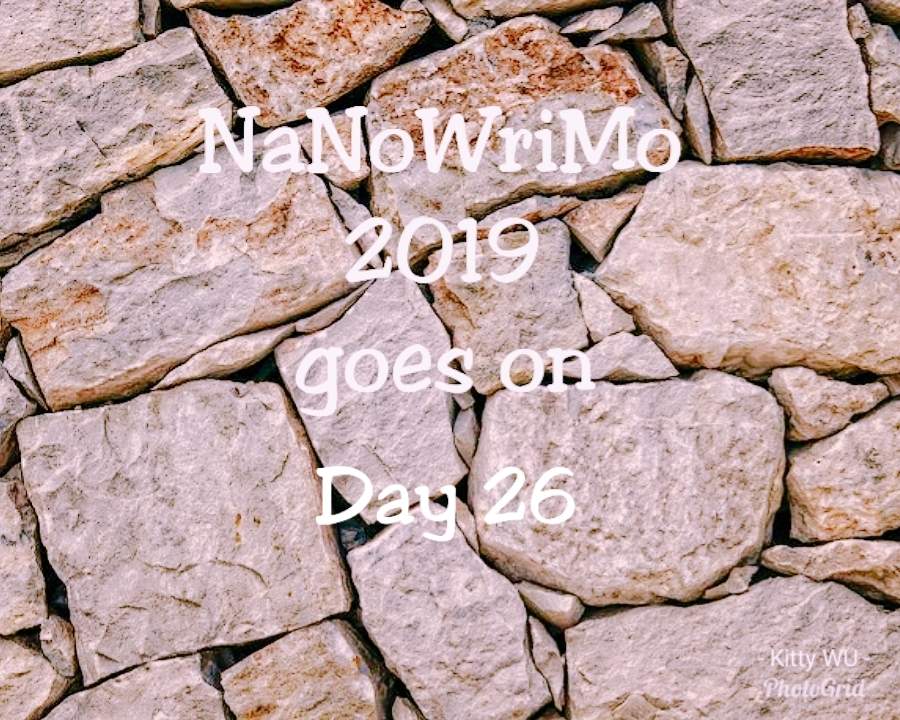 NaNoWriMo stands for National Novel Writing Month. November is over and on my 21st day, I wrote over 52K words. Words I will not all use for my story.

The father, his firstborn (they are giants created by him) and eight first living go on an expedition. They hope to find the "other world" the ghost mentioned.
The first time the father (aka creator) searched for it he went alone, ended up in a tunnel and lost his mind.
This time they end up in an amazing water world but they are in trouble. The giants who walk through the water slowly turn into stone and a building where they hope to find a shelter refuses to let them in and tells them to leave. It does give a ship which leads them into an ocean.

"Can you change them, these two?"

"How do you like me to do that? It was the cold water that did not me." Silverstone sounded insulted.

The creator walked upon him while his sons followed.
"Try! You can at least try it. If it works you all survive and live on. I am the last man on earth and lived. They just started their lives. You share your wisdom with them. You will find a way out of here. You all will. No one carries as much wisdom as you altogether."

They all heard what the father said, his plead for life. It was clear to them his end was near. They felt the heath and his fear.

"I do it", one of the guards said and before they all knew he left one son for the other.

"Let me try." Firestone had not said a word since the giant he used completely changed into stone. He stepped into the last son and they waited. Nothing happened. The first living did not change them and were not infected by staying in a stone giant.

"It is not the cold", the Wall said. "Look at the hand!" He hung over the boat's edge and lifted the giant's hand. It turned into stone.

"The water caused it. No matter if it's cold or warm. Are you an alright creator?"

The inventor nodded. His hands were fine, as green as usual only lost their power. The water turned his sons into stone, would burn or cook him and the first living would be the last living. At least in this part of the world. He sank down on his knees and cried. It all turned out different from what he had planned. Statues his firstborn would be and the lastborn... He whined and they let him. There was nothing left to do as staying till the end. The strange ship sailed forward and didn't care. Its course was set and could not be changed.

"We can leave, jump overboard. All of us. We hold each other or..."
The guard who spoke was in thought. I spoke out loud without thinking.

"We change this boat, it can protect us against the heath. I believe it will survive."

"Or we sink with it! Who cares about that thing anyway. It was a miserable gift from a nasty building who told us to leave and brought us in danger." Firestone said bitterly.
The Wall nodded. "I agree, we have nothing to lose but you and your sons are a different story."

They carried the stone giants to the middle of the ship and told the inventor to step aside. Hold them up and used them as a battering ram. With a snap, the bottom broke and a tentacle appeared out of nowhere swung up and down while a voice shouted: "Leave me alone. You bunch of ungrateful vandals. I gave you a chance to escape! Didn't they tell you!"

Who they were the voice did not tell. They were swept off the boat into the water and the last thing the father saw was his drowning sons. Stone does not float and cannot swim. He lost contact with the Wall, his old friend Silverstone while he tried to keep his head out of the water. He never learned how to swim and as he closed his eyes the last thing he saw was Wolf swimming in the pond. He never really liked it although he was always around it.

"It is not so hard and the water is not cold as long as you keep moving", he growled. "Move your legs boy."

He felt Wolf's hold in his neck, his body underneath his and push him to the surface. "Swim or drown there is nothing in between."
His legs moved, moved automatically and he swam, he stretched his body and floated. He felt the firm grip of Wolf and felt secure.

He smiled as his head sank into the water and his body gave up on him. Like a rag doll, he floated into the direction of the fire sea. The flames waited, eager to swallow the last man on earth.

NaNoWriMo 25 - Troubled water - I crashed and lost the story

wakeupkitty, I Need Your Help!

Both @ArtTurtle and @Artopium (and perhaps soon @thejollyroger) are being needlessly downvoted by themarkymark. The more the delegator bots
are downvoted the less they will be able to upvote your content so this is an indirect attack on you! This is happening out of
pure vindictiveness as you know these bots are not spam and are powered by your steem power. Please help out by upvoting this comment
in order to counteract themarkymark's downvotes. Then please use your new downvote pool to downvote themarkeymark. He is a witness
and is abusing his power as such. Please unvote him for witness here.

He creates blacklists of thousands of Steemians he deems "inappropriate". I believe he is a majority cause for the drop in
the price in steem as he wrecklessly downvotes random content causing people to want to leave Steemit. Since he has over 500,000 SP
he can do quite a bit of damage, so it's going to take a concerted effort to get him to stop. Thank you!

You've just received an upvote of 11% by artturtle!