Hey, how awesome is Reggae? 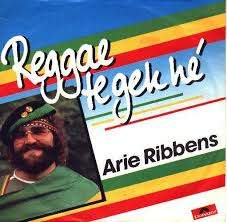 Some songs you will always remember, suddenly they pop up again.

Oh no, this is not a real reggae song.

The only thing the song has to do with reggae is it's text and the cover of the album it had in these days.(1984).

The Dutch singer, Arie Ribbens, born 1937, became famous because of his Carnaval songs and this was one of them. (No again. I do not celebrate Carnaval, I am also not a fan of Dutch folklore songs).

Reggae, te gek hé (1984) I still do find it a funny song. It is about a guy who decides to celebrate his holiday in Jamaica. Rum, reggae, dreadlocks, rastafarian and "big cigarettes" is what he is getting in touch with. Awesome (te gek) according to him and you would like it too.

Some lines of a Dutch children's song are used too.

I wonder if this Carnaval song was an introduction to reggae music. Imagine Holland, not only the Catholic part (mainly the South part of the country) was singing during Carnaval (and weeks earlier): Reggae is awesome!

Recently I went on vacation to Jamaica I took the rumboat of half past nine
I thought it would be nice to look around there
Because who is not gone is seen.

Yes, it's the place were reggae is very popular
You also feel great there.

Three little todlers on a fence,
sat in the sun.
The tricycle stood in a bicycle rack.
You could see, it was an occasion.
And all three their tires were flat, hey. Using that bike no way.

They also smoked very heavy shag,
Ate rice with beans,
but I always ate rum beans with bacon,
After all, I am from the Netherlands.
I enjoyed those coconuts
I usually had one in each hand

He is 82 years old and the living prove that miracles do exist!

What do you mean this is not reggae? Sounds like international Reggae music to me, listening now to catch the vibe ... Dutch Reggae?!?! definitely a treat tonight