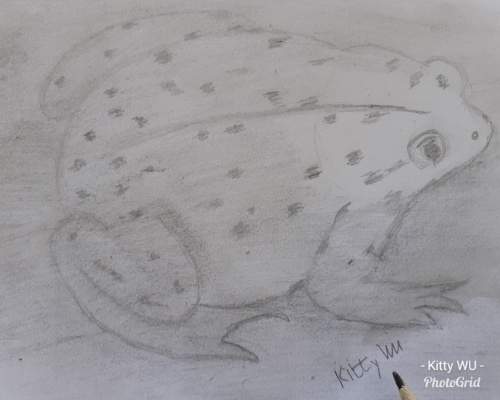 Dedico esta historia a @gertu, she inspired me to write this tale.

A deep, long silence followed after the goat finished reporting about his last exploring.
Both seemed in thoughts. The toad was the first who spoke.

Excited by the idea he hopped on and off the rock he used as a seat. His friend nodded. Goat had talked longer as usually. His head felt strange and his throat dry.

"Will you take me there?

Goat's voice sounded like screeching tires as he tried to speak. Toad had never heard a sound similar to it. Curious he crawled closer.

"You what", he asked.
His friend's eyes looked red and it was as if the eyeballs popped out his head.

"What, whaaat", Toad shrieked crawling around his close friend. "Don't let me down now, get up on your feet. You have to take me there, we both have to go."

"Water", Goat said. His voice didn't sound like his but Toad heared him.

"Water? Sure, okay I get you some. The pond isn't far away."

Worried he crawled and hopped as fast as he could into the direction of the pond, asking himself how to deliver the water to his friend. He didn't want to let Goat down and not allowed him to let him down. After all these years Goat found the garden of Eden, the place were they both could live happily ever after.
It was huge, full of trees and plants and Goat had tasted them all, told there was plenty of food for him as well.

"There are more snails as you can eat in your entire life", that was what his friend had said.

At the pond he drank some water, soaked his feet and filled his mouth with water. Slowly he crawled the way back, hoping he would not swallow, wondering if the water would be enough to get his friend back at his feet.

Goat was breathing heavily, wondering what had caught him. He felt no fear, could not remember ever been sick in his entire life. His head felt strange, his legs refused to listen and his heart pumped in his ears.

"I warned you", a voice said, "not to eat the forbidden fruits!"

Did he eat them? He closed his eyes, tried to remember but couldn't. His mind was empty the only thought left was to sleep.

Goat stretched out on the ground was what Toad found. He could not speak with his mouth filled, pushed his friend's mouth open and spit out the water inside it. Goat swallowed but kept his eyes closed.

"He ate the forbidden fruit", a voice said.

A snail stared at Toad.

"I told him not too. You should not eat what isn't yours, it is forbidden."

"What kind of fruit", Toad asked who felt hungry as soon as he saw the fat bite in front of him, he crawled a bit closer into Snail's direction.

The snail didn't move, he did not belong to the category of fast food.

"Humans do not like it if you invite yourself into their garden and destroy their hard work."

"Did they poison him?"

Toad looked from Snail to Goat. Was Goat dying? He did not seem to be in pain it was as if he slept.

"No, I don think so. He just ate too much, is tired and if you ask me drunk. Haven't you smell his breath?"

Toad looked at goat and didn't know what to think. He knew his friend lived to eat. He could not stop once he saw it and only the thought of something being edible made him eat it. Goat was not a gourmet like himself. He sat close to his friend who started snoring. He would wait and watch over him till he woke up. Losing his Goat was more than he could bear.

"The garden of Eden", he thought, "it all sounds so beautiful but it is not the right place to be for me and my friend."

He looked around. The sky was blue, the grass was green, the pond was near with plenty of fresh water and food was within reach. Toad smiled, opened one eye and Snail was gone.

I made Toad on a piece of used paper on my lap. He is soaking his feet...

Yes, I have been active. I can prove it with the diary I started Sept. 13.
Ignored my infected leg and went with the wolf, fed them all and finally started mowing again.
With the garden I make more steps but the mobile does not count all of them.
It was a shining day yesterday and I ended it with a fine beer.

Thank you for stopping by your compliment and commenting. I appreciate it.

I wish you a great day 💕

I am a (Dutch) story teller. Here I lost myself and my inspiration. I join contests and try to earn to count. Stories are not rewarded, real writers are not rewarded. I wish you a great day with love 💕

You have accordingly been rewarded 56.5075 AFIT tokens for your effort in reaching 10527 activity, as well as your user rank and report quality!
You also received an 1.25% upvote via @actifit account.
Actifit rewards and upvotes are based on your:

Thank you for your comment and the reward again. It is highly appreciated. 😁

I wish you and all actifitters a great day 💕

Yes it is and it cares for a goat and lives fat bites. 😁💕